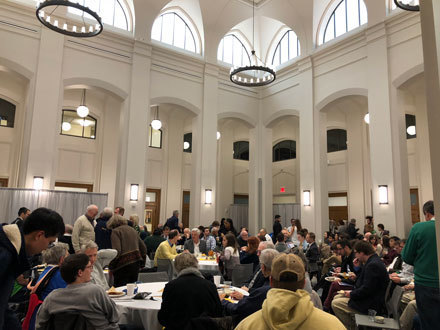 Before the move in late July, Nanovic staff expected foot traffic in the Institute to increase, but they could not have foreseen just how busy the rest of the first floor of Nanovic Hall would be.

The level of daily activity in the building has been extremely high, particularly in the Nanovic Forum just outside the Institute’s doors. Each week, and sometimes several times a week, the Forum has been filled to capacity (~150) with seats and tables for a variety of lectures and other events from nearly every institutional tenant in the building. Each Monday at 4 pm, to bring life to the Forum as a whole, some talented musician scheduled by the Institute plays five minutes of music. 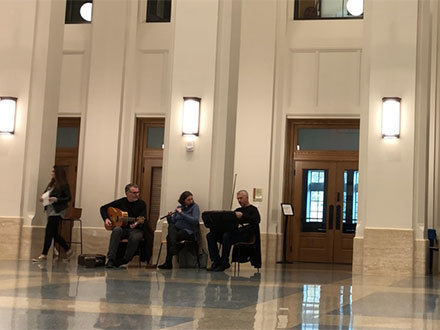 The Elizabeth E. Nanovic Seminar Room adjoining the Forum has seen regular use for Keough School workshops and policy events, seminars and departmental colloquia, Fulbright Student Association lectures and meetings, occasional lectures organized by other institutes and programs, administrative meetings, and advisory councils. The Seminar Room has even been used as a filming location by Marketing and Communication. 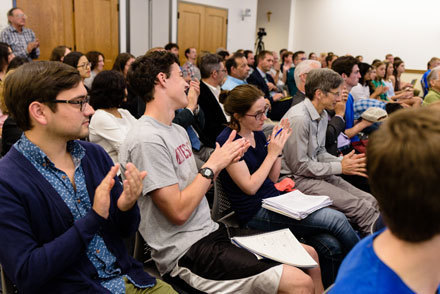 The Nanovic Institute used the seminar room for a standing-room only lecture and discussion with Sir Alan Duncan, Minister of State for Foreign Affairs of the United Kingdom. The room was similarly full for Myroslav Marynovych, Vice-Rector for Mission at the Ukrainian Catholic University and founding member of human rights watchdog groups in Ukraine during the USSR. At the invitation of the Department of German & Russian, Mischa Gabowitsch, a research fellow at the Einstein Forum in Potsdam, Germany, spoke this semester about Putin’s Russia. To enhance presentations for both speakers and audience members, the Institute purchased “confidence” monitors for the Seminar Room, which have already been installed. 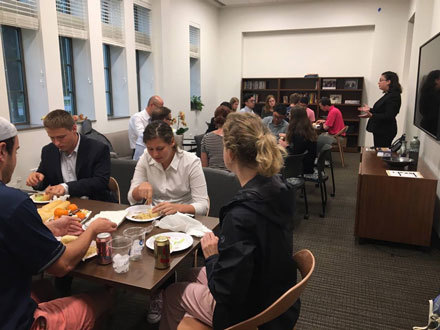 Elsewhere in the Institute, the Enclave has been a busy tutorial and study space for students. With sunshine and flexible seating, the Commons Room has seen heavy use for conversations with former heads of state, visiting filmmakers, and political dissidents; lunches with new faculty; seminars with distinguished European scholars; meetings with representatives from the Vatican; faculty working in groups such as the CTME (Cultural Transformation in Modern Europe), and many ad hoc meetings with students and faculty committees. The Institute’s Scholars Suite has also been lively with our own visiting scholars from central and eastern Europe and visiting dignitaries and European scholars from other institutes on campus.

In sum, the Institute for European Studies is now seeing higher foot traffic, total immersion in a changing environment of scholarly events, and greater visibility as one of the central players in the life of the new building and the Keough School of Global Affairs.