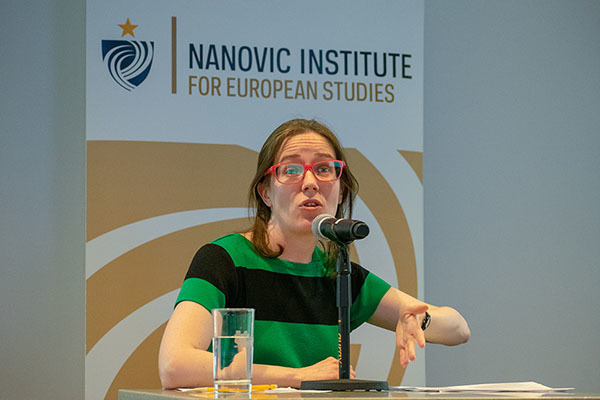 Ed. As of the time of this writing (4/1/2019), the Parliament of the United Kingdom is engaged in a second round of 'indicative votes' regarding alternatives to the withdrawal agreement negotiated between the government of Theresa May and representatives of the European Council. The Institute convened a panel discussion of this issue in collaboration with a new student club at the university, European Union Notre Dame (EUND).

In the days leading up to the March 29 Brexit vote, the Nanovic Institute convened three experts in political economy, corporate law, and European integration to help the Notre Dame community make sense of one of the most perplexing political events of our day. Panelists included Barry Colfer, Deakin Visiting Fellow at University of Oxford’s St. Antony's College, Desmond Dinan, Professor of Public Policy and the Jean Monnet Chair in European Public Policy at George Mason University, and Clare O’Hare, a Political Science Ph.D. student at the University of Notre Dame and a Nanovic Institute Graduate Fellow.

With a graduate degree in Law from the University of Cambridge and nearly a decade of experience as an international corporate lawyer in London and Dubai, Clare O’Hare introduced the topic by focusing on the main challenges the UK will face should it become a “third country.” She described the implications these challenges would represent for the four freedoms central to the European Union project (the movement of goods, people, services, and capital across borders). She reviewed the six primary options that have been, or continue to be, discussed regarding the UK's relationship to the EU. [Ed. These have now multiplied to eight options.] Noting the speed at which the news cycle has been operating, O'Hare closed her remarks by reviewing the European Council's decision just days before to establish new timelines and conditions for the Brexit process.

"I was delighted to be able to introduce some of the key legal issues," O'Hare said, "and to have the opportunity to hear insights from Barry Colfer and Desmond Dinan on the specific Irish and British aspects of Brexit along with the wider issues that Brexit raises for the European Union."

Mr. Colfer began by remarking on the "comical light speed" of Brexit news and focused his remarks on the centrality of questions related to Ireland. Having worked for both the Irish and European parliaments, Colfer noted that 20,000 persons cross the border between Ireland and the UK every day, many of whom voted Remain. He observed that to many Irish, the EU is seen as "enhancing Irish sovereignty," not diminishing it, as Ireland seeks to move further away from the UK. This disposition has shaped the UK's entire approach to Brexit itself. Regarding the negotiation period that would follow any withdrawal agreement, Colfer noted additional questions that will inevitably arise, such as what is to happen to the rest of the communities that make up the United Kingdom (e.g. Scotland, Northern Ireland), should Brexit occur?

"The UK Parliament is in a state of chaos," Colfer said. “If you have come to this panel in hopes to find an end to the bewilderment, you’ve come to the wrong place.”

Prof. Dinan, a native of Ireland, has worked as an advisor to the European Commission in Brussels and expressed firm belief in the value of the European Project. He identified seven main implications of Brexit for contemporary European politics. First, Brexit is "a major shock" to an EU system "predicated on the assumption of ever-closer union." Second, although Brexit is "not an existential threat" to that system, it does represent a challenge that the EU27 has managed well. Nevertheless, Brexit has triggered a major debate in Europe about the future of the EU. Should a Brexit occur, the political implications for European-level institutions would be significant: without UK members of the European Parliament, balances of power there will shift ("qualified majorities" will change in nature), the European Council will experience similar shifts, and England's experience in foreign policy, trade negotiations, and EU enlargement "will be sorely missed," particularly at high political levels. But these changes do not themselves represent a true crisis, he claimed, reserving the term for describing the debt crisis in the eurozone, the lack of effective and humane migration policy, and ongoing threats to liberal democracy.

The question and answer session with students took up broader questions: what were some mistakes in European integration? What are the compelling reasons to believe in the European project? What is the future of Irish unification after Brexit, and the fate of the European Union itself? In closing, Prof. Dinan expressed some optimism about upcoming European elections in May because, with issues of such significance on the table, elections "will no longer be regarded as second-order elections" but be seen as vital to the nature of Europe today.