With the support of the Institute, forty students and faculty from Notre Dame's Berlin Program took a study trip to the city of Vienna. The excursion was led by Prof. John Deak, Carl E. Koch Associate Professor in the Department of History, an expert on the Hapsburg empire, and organized by Prof. Steffen Kaupp, Executive Director of the Berlin Program. Through a mix of academic lectures, cultural immersion, as well as interpersonal exchange students were introduced to the richness of Viennese and Austrian culture. 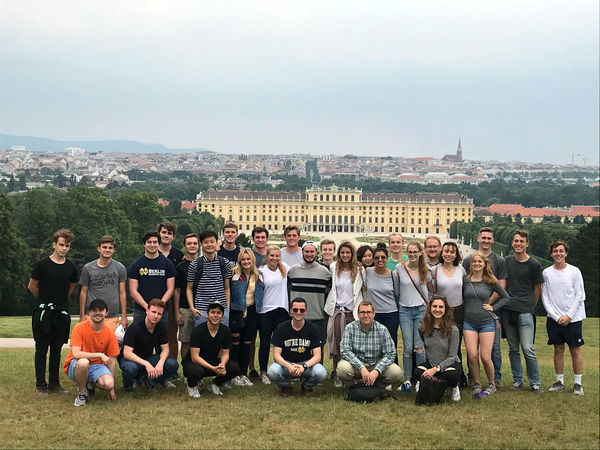 On our first day, just after we had arrived in Vienna, the group went to Schönbrunn palace. A former imperial summer residence, Schönbrunn is one of the most important architectural, cultural, and historical monuments in Austria. Students and faculty were able to tour the inside of the palace, guided by expert commentary through an audio guide. After the tour, Prof. Deak and Prof. Kaupp met with students in order to debrief the guided tour, and put the newly acquired information into a broader historical context. The visit to Schönbrunn ended with a hike up the hill to the Gloriette, where this photo was taken.

On our second day, Prof. Deak led the group on a 2.5 hour walking tour through the city. All students had been prepared for this tour from a specific disciplinary background, in that their Berlin-based classes had introduced them to Viennese aspects of their object of study. For example, students in Prof. Pabsch class had been studying the architecture and design of Berlin, in the weeks leading up to the Vienna trip. Through preparatory readings, students received an introduction to Viennese architecture and its distinct differences to Berlin. On the walking tour with Prof. Deak, students were able to first-hand focus on these aspects, and thus broaden their understanding of how architecture and design are connected to larger questions of national identity. Throughout the city walking tour, students enthusiastically engaged in an ongoing conversation with Prof. Deak, who challenged students to not take anything they see for granted. 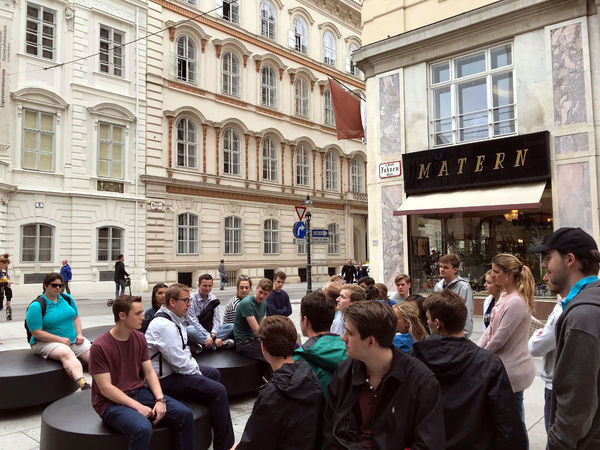 Study abroad research has shown that experiential learning, where the exploration of local sites is integrated into academic curricula, fosters deep learning, and allows students to make connections that often transcend disciplinary boundaries. During our time in Vienna, each instructor took their classes to different important sites for their respective courses. For example, Prof. Kaupp’s Berlin since the War history course had discussed Holocaust commemoration and memory culture in Germany, where they visited the Memorial to the Murdered Jews of Europe in Berlin.

For the Vienna visit, students had read an academic article on Austria’s complicated history of Holocaust commemoration, from victim myth to co-responsibility thesis. In Vienna, the class visited the Jewish Museum, where they received a private tour with Hannah Landsmann. Ms. Landsmann engaged the students in a multilayered discussion about Jewish life in Vienna, and how their museum does not see itself as a Holocaust museum but as a museum that portrays a broader history of Jewish life. Additionally, we also visited the Judenplatz Holocaust Memorial, and analyzed its different to the Berlin Memorial, and what this difference tells us about the larger questions of Holocaust commemoration.