Two of the best teachers of medieval music and chant currently work at the Sorbonne University in Paris. With the support of the Nanovic Institute, Victoria Fraser (Masters candidate in Sacred Music) had the opportunity to study, hear, and coach pieces of the repertoire with them privately.

I use what I learned there on a daily basis and will continue to carry it in the future. I shall never forget my brief journey into the world of medieval music with these two master teachers, and I look forward to incorporating their wisdom and teachings into my career as a performer, composer, teacher, and scholar of medieval music.

Medieval Chant at the Sorbonne

I have found Gregorian Chant to be invaluable in all areas of my career. In teaching, chant can be a powerful tool when teaching children and students to understand text-stress in music. In composing, I have found great inspiration in looking to the past for melodies around which to compose new works. I’ve found value in incorporating works of chant into my own performances and recitals. In church work, having a mastery of this dying art form can not only set one apart as a church musician, but make the singer a highly valuable asset to the small handful of churches around the world who want to keep the tradition of Gregorian chant alive.

During my visit to Paris, I attended several chant services in churches and attended classes at the Sorbonne University. It is rare to find churches in the world who sing an entire mass, so I was deeply moved and fascinated by the practice I observed at Notre Dame and Église Saint Gervais-Protais. I was able to visit the cathedral in Metz where some of the most important manuscripts of Gregorian chant were preserved for centuries. 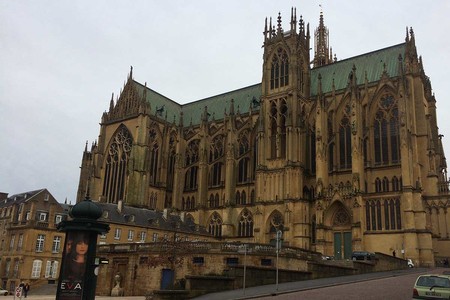 The Metz cathedral, where many of the most important manuscripts of Gregorian chant were preserved for centuries.

At the Sorbonne, I observed a master class with world-famous, Benjamin Bagby. He coached his students in medieval secular music. He emphasized text expression and analysis of which medieval mode the piece employs. On a separate occasion, I was able to have a private coaching with Professor Bagby. I brought a chant by Hildegard von Bingen and he provided me with a unique and powerful approach to not only singing her music but teaching it to others. He recommended memorizing the melodic cells which serve as building blocks for a particular piece then improvising those with Hildegard’s text. After the cells have been internalized, then returning to the original melody will make the execution of the music as natural as possible.

In Professor Katarina Livljianic’s class, she first lectured about the misunderstood history of different forms of archaic music notation. I was then invited to join her class in singing some sacred chants in a small group. Her approach to the music was, like Professor Bagby’s, almost entirely dependent on the text. After singing the chant text on a single note, she then instructed us to slowly add the written pitches back in. She taught us to treat certain notes more like ornaments of the melody rather than giving equal importance to each note. I was amazed at the freedom with which she treated rhythm in the melodies.

In my private coaching with her, she helped me understand how the music must be shaped to fit and express sentence structure—no easy task when a single syllable can often have dozens of notes. After my coaching, Professor Livljianic offered to take me for a coffee so that we could discuss the possibility of attending her program, singing in Europe, living in Paris. 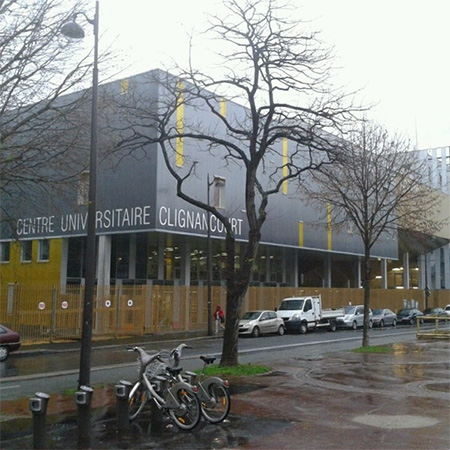 The University center where my classes and coachings took place.

Understanding the practices of medieval music, and chant especially, leads to a greater understanding of the history of the Catholic church. Chant was the substance of worship during the time much of the liturgy was created and standardized throughout Europe. Though much has changed since Vatican II, there are many, myself included, who believe it is imperative to keep the old practices alive. With so few scholars who are also performers championing this music, learning from them is crucial to perpetuating this rich spiritual practice.

As a student and performer of sacred music, my time in Paris provided me an invaluable week of study with two of the great scholars of the music in which I specialize. It not only granted me world class training as a performer but provided me with first hand experience in the pedagogy of this music.

My career will require me to perform and teach this difficult practice and while I traveled to the Sorbonne to focus on the former, I came away with some excellent teaching tools. My time with Prof. Livljianic opened my eyes to a different world of singing overseas and provided me with professional contacts to help me shape a career abroad. I use what I learned there on a daily basis and will continue to carry it in the future. I shall never forget my brief journey into the world of medieval music with these two master teachers, and I look forward to incorporating their wisdom and teachings into my career as a performer, composer, teacher, and scholar of medieval music.