Senior Stephanie Leung is a major in Architecture with a minor in Studio Art.  Over fall break, she traveled to Finland on a Senior Fall Break Travel and Research Grant from the Nanovic Institute to research Nordic architecture and how its contemporary design is rooted in classicism.  Find out what she discovered in her own words:

In architecture, many see modernism and classicism as two opposing forces, with modernists rejecting classicism, calling for a new architecture that represents the new century, and classicists seeing modernism as lawless. Rather than choosing sides, many Nordic master architects have explored the fascinating intersection of how classicism can enrich and innovate new modernist designs. The opportunity to travel to Helsinki and Stockholm has allowed me to garner a wealth of knowledge in building precedent and design philosophies.

Nordic design has pioneered the modernist movement in the past century, and the design philosophies throughout the past century have heavily centered on aesthetics and functionalism, although the styles have ranged from classical to modern. Many of the Nordic master architects were actually trained in the classical tradition, and deeply admire traditional occidental and oriental architecture, and have incorporated many of their elements in their own designs. As a student at an architecture school that is heavily focused traditional principles in the 21st century, I was intrigued by the reinterpretation of these elements, and how these architects engaged nature through light, building materials and the surrounding site.

In Stockholm, I mainly explored the works of Gunnar Asplund, Sigurd Lewerentz and Johan Celsing. I saw various buildings of different scales, sited in both the city center and in a more natural setting. Of buildings situated in the city, the Stockholm Public Library serves as a prime example of classical influences on modernist buildings, and the shift of Asplund’s move from classicism to functionalism. Using classical proportions to govern the openings of the building, he stripped down the building details, in accordance with the modernist movement. The classical form of the rotunda allows for ample light on the interiors, and the monumentality of the main room. The building is an exemplary example of the typology of a public library where the patrons thoroughly enjoy and frequent the building. Many of these design principles also governed the design of Woodland Chapel, which he designed alongside with Sigurd Lewerentz, who was also influenced by classicism. They took into account the site and its relationship with nature and set the chapel back in the woods, creating a wonderful spatial experience as one walks up to the chapel and enter into its classically domed shape. 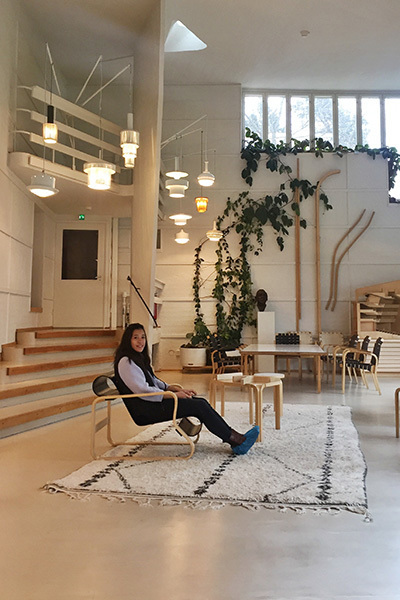 Many of these themes were also present throughout the buildings I saw in Helsinki. I visited the Kamppi Chapel, Temppeliauko Church and Museum of Art Kiasma, which were just a handful of the architectural gems Helsinki has to offer. The Kamppi Chapel and Temppeliauko Church both evoked memories of the Pantheon as the diffused lights from the skylights gently trickled down the natural materials (wood and rough granite, respectively) that made up the walls of the church. The Museum of Contemporary Art, Kiasma, designed by an American architect, Steven Holl, takes many lessons from Nordic design. He designed a dynamic building, with a variety of spatial experiences for visitors, through light, organic forms and dynamic massing. The building is sited close to Finlandia Hall, designed by Alvar Aalto, Finland’s renowned architect, who was an inspiration to Holl in his formative years.

I also had the opportunity to visit many of Aalto’s buildings in Helsinki, from his studio, Atelier Aalto, to the emergency air raid shelter entrance, a little structure on a traffic island in downtown Helsinki, which was Aalto’s first commission in Helsinki. With many of Aalto’s buildings, there is a sense of artistry and romanticism in the building design itself as well as the building details, such as the door handles, and light fixtures, and the building material itself. Rather than just designing clean and efficient spaces, as with how many modern principles dictate, his designs inspire evoke the romanticism in traditional architecture in an entirely new manner.

There is a strong divide in architectural theories between the contemporary and traditional styles, and many believe that we have to be on either side of these two movements, but Alvar Aalto, Sigurd Lewerentz and Gunnar Asplund are all exemplary architects who sit astride of this divide. Although they are regarded as contemporary architects and have contributed to the Scandinavian modernist movements that have shaped modernist architecture internationally, all three architects were heavily influenced by classical architecture. From their sensitivity for nature, the site and building materials used, to the striped down detailing with classical proportions, these factors are attributed to their appreciation of classical principles. Although they are demonstrated in a much different language than what Michelangelo or Bramante would have done, they evoke similar experiences and wonder in its patrons.

As a young architect, it would be detrimental to my education to take sides or heavily favour certain movements or styles of architecture, but rather I should learn from both contemporary and traditional examples. Spending my junior abroad in Italy, there were many examples from antiquity through the Renaissance period and onwards, that emphasized classical proportions and detailing and ornamentation. Throughout fall break, I have experienced first hand many of the iconic modernist buildings in Helsinki and Stockholm. I have noted the many influences of classical principles on modern buildings from an urban scale down to the building details, and it is an intriguing counterbalance of architectural education in comparison to Rome. I am eager to continue exploring these parallels through experiencing other buildings and learning from master architects, and finding ways to apply these classical rules of architecture in my own designs in an innovative manner.

This experience has also inspired me to start a podcast through the School of Architecture, as I would like to engage both professors and students in the dialogue regarding the intersection of modern and traditional architecture movements. I am beyond grateful for the opportunities the Nanovic Institute has afforded me, and these experiences have significantly widened my horizons and furthered my education of architectural vernaculars, allowing for me to become a more knowledgeable and versatile designer.