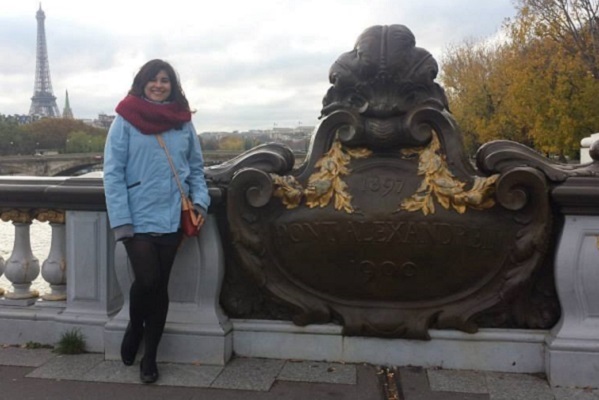 Let's welcome Steffany Ibañez ('16) to the Student Spotlight! Steffany, an Information Technology Management major, received a Senior Travel and Research Grant to travel to France over winter break to conduct research on France's IT environment. While there, she conducted research at La Bibliothèque Municipale d'Angers, and she conducted interviews of people in various positions within IT companies. Steffany recently wrote to us about her experience:

Earlier this year, on June 15, 2015, the EU opened up for discussion the creation of stricter and more uniform data protection laws that will surely change and challenge the IT infrastructure of the EU countries (“Data Protection”). This new law has been met with different reactions across the EU nations; these reactions were based on where each nation stands in their IT culture and investment and opens up the floor for a deeper analysis of IT history and foresight.

The changing IT environment could cause definite problems for the members of the EU. Europe as a whole has the lowest investment rates world-wide when it comes to IT. To better understand what this means, the average growth rate in IT budget in Europe is about 3.6% compared to 9% in the Middle East and about 6% in the US, making it clear what a large (and expensive) Data Protection law could mean for some of these EU countries in terms of feasibility. France itself has the lowest growth rate in IT budget in all of Europe and only 15% of French companies in the 2015 IT Priorities report predicted an increase of 5%-10% in their IT investments, and 37% expected their budgets to stay the same. These statistics don’t add up to a country that should be preparing itself to meet stricter security and data transfer regulations and standards.

During my trip, I focused on France and attempted to obtain a better understanding of France’s history in IT development to create a more comprehensive analysis of why France is facing such low investment growth. Unlike the resources that I used as background for my research, I meant to synthesize history and the current situation by taking into account the perspective of French IT professionals who are directly affected by the future of IT in France. This year France hopes to finalize the General Data Protection Regulation (GDPR) and New Network and Information Security (NIS) legislations and compliance will be mandatory starting 2017. France will have to work collaboratively with its IT departments to accomplish this, but will that be possible considering history, government regulations, and the current IT situation in France?

It would be impossible to discuss the history and importance of IT in France without understanding the history and evolution of INRIA. INRIA was created in 1966 as a research institution created by CII (the Compagnie Internationale pour l'Informatique) to bring France forward in the world of IT. INRIA was created after the devastating takeover of the French company Bull by General Electric. Before this takeover, it was France who led the entry into the personal computing world and afterwards France was left in a scramble to keep up with the rising IT innovation giants in the US. To put this into perspective, at this time the USA boasted about 120,000 computer scientists while France didn’t account for more than a thousand. This was the time after WWII and France was still building up after the war, so investment and innovation was low. French companies were struggling just to copy the new models that US companies were creating, playing catch-up, and because of policy and regulations, the French market and consumers were denied access to computers that GE was producing after the takeover of Bull. Because of this, it is easy to understand why afterward, throughout INRIA’s history, the organization has struggled to gain public support.

INRIA often faces priority issues since it is both a research institution focused on long-term technology development and a governmentally regulated organization.  This has caused INRIA to develop more into a project-based consulting organization than the research institution it was meant to be. Often their statements and future plans are criticized by the public and newspapers, such as Le Monde, for resembling “plus a un plaidoyer qu’a un programme detaille” (more like a speech than an actual detailed plan).  Even within INRIA itself, the company has met problems with keeping its offices uniform and cooperative as it tries to expand and meet security regulations. For example, in 1992, INRIA attempted to create a new, more secure, technology architecture as a response to a breach in the system. The actualization of this system was difficult, ununiformed, and even out-right rejected by some of the local offices such as at Racquencourt.

Considering that INRIA is the most well-funded, regulated, and oldest IT organization in France, this is concerning. INRIA pulled France through its biggest tech innovation rut in its history, and yet still struggles to gain both public and governmental support. Similarly, I have found that IT workers within their organizations are facing the same problems when trying to gain support from their companies. Companies are not listening to their specialists when it comes to investing and even taking initiative in patent protecting their work. In my research I have found that “ta culture Informatique,” this idea that the generalist is as important as the specialist, that the normal user can become as important and well informed as the computer scientists, leads to the disparagement of IT departments, resulting in employ dissatisfaction.

As an ITM major and Francophile this research has enlightened me to the obstacles that I might face when I try to enter into the job market in France. Also, despite the fact that these problems seem out of place in today’s modern world, several case studies throughout my university career have taught me that these problems are not limited to France. Companies often struggle to bring their IT issues and needs for investment to upper management. This assures me that there is still room for improvement and a need for people who can both understand the IT lingo and have the social and business skills to bring streamlined processes between technical and managerial departments.