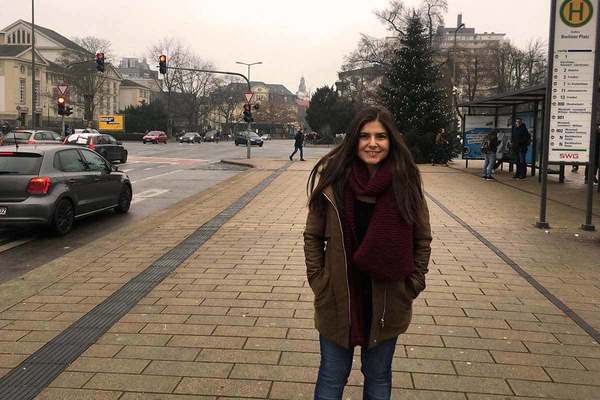 Sevda Arlan just after starting her field work in the city.

Zazaki is an Iranian language originally spoken in South-Central Turkey, but today many Zazaki speakers can be found in Germany. In December, Sevda Arslan, a Ph.D. candidate in anthropology, traveled there to learn more about the Zazaki community.  In April, she will present some preliminary findings at the Chicago Ethnography Conference.

The Nanovic Institute for European Studies made this trip and research possible and thanks to the institution’s support, I was able to visit my field site locations, establish contacts for future collaborations, learn how to get around the cities, and locate the necessary venues where multi-lingual migrants and Germans with a migration background reside.

On December 14th, 2016, I arrived in Frankfurt and spent about four weeks in Europe to conduct a pilot field work study in anthropology towards my doctoral dissertation.

I spent the majority of my time near Frankfurt and Giessen, which is about 40 miles north of Frankfurt. While Frankfurt is a very international city, where people from all over the world speaking different languages can be heard on a daily basis (heavenly for a linguistic and socialcultural anthropologist as myself), on the other hand Giessen is much smaller and fewer languages seem to be spoken on the streets. Giessen has about 78,000 inhabitants while 24,000 of them are university students attending the Justus Liebig University Giessen.

Interestingly, Giessen used to be an American military base after World War II and only in 2007, about sixty years later, did the American army leave the city1. Thus, it is not unusual to still walk by certain streets that remind one of the U.S. occupation time, such as street names like “Lincolnstraße” and “Marshallsiedlung”.

I chose Giessen (and the surroundings of Frankfurt) for my research because a large number of Zazaki speakers reside there. My research focuses on the linguistic, identitarian, and social relations of the Zazaki community. Zazaki language and people. Zazaki is an Iranian language which is originally spoken in Southern-Central Turkey. However, many Zazaki speakers migrated to Germany since World War II as part of the German guest worker program. Thus, my participants range from being born in Germany to some who have recently migrated. Accordingly, my conversations took place in German, Turkish, and Zazaki or sometimes a mixture of any the two or three languages.

For my research specifically, I was able to locate venues that were mostly occupied by Zazaki speakers. For instance, I was able to map out where Zazaki restaurants and other entertaining places, such as clubs and gaming areas, were located.

One part of my research consisted of observing people in restaurants, shops, and on the streets. I paid attention to what languages were spoken and how people interacted with each other. I was also able to conduct a total of 20 in-depth interviews. Some of these interviewees I was able to approach myself, but the majority was referred to me by my initial collaborator with whom I had established contact through e-mail prior to my arrival. Unfortunately, on some days, it was challenging to find strangers willing to talk to me (mainly because they did not feel comfortable signing my consent form). However, the referred interviewees were very enthusiastic about my research and welcomed my questions. Two families even invited me to their homes and I was able to enjoy meals with them while getting to know them better and conducting interviews at their homes.

The Nanovic Institute for European Studies made this trip and research possible and thanks to the institution’s support, I was able to visit my field site locations, establish contacts for future collaborations, learn how to get around the cities, and locate the necessary venues where multi-lingual migrants and Germans with a migration background reside. Above all, through the interviews, I was able to refine my research questions and by speaking with people, I have now more information about my participants and how they view themselves and construct their multifaceted identities in Germany.

This trip also made me cognizant about the challenges in doing ethnographic work, as working with people can at times be complicated due to their life situations. I learned that above all being flexible and open to new situation is necessary, particularly when people are disinterested in your work or share disturbing inhumane views about others. Thus, I learned that being an anthropologist means to develop a thick skin as well as good planning and preparing for varying circumstances can help to deal with unexpected situations such as when coping with sexism and hostility.

I am looking forward to return to Giessen and the Frankfurt region for summer to follow up with my research and collect further data. Right now, I am in the process of transcribing my interviews and analyzing my notes to be presented at the 19th annual Chicago Ethnography Conference on April 8th (my abstract was accepted). Moreover, I want to use my data to expand on a previous paper related to “multilingualism, music, and migration” to be submitted to a peer-reviewed journal.

I thank the Nanovic Institute for this wonderful chance to grant me the opportunity to get a strong head-start with my research towards my doctoral dissertation. Now, I am in a very privileged position to have already collected data in my first year, to present them at conferences and produce a stronger dissertation. Without the support of the Nanovic Institute for European Studies, I would have not been able to refine and redesign my dissertation proposal and be better prepared for my upcoming fieldwork research this summer.

1. Giessener Anzeiger, 2016. “Wo Panzer uber die Strassen donnerten” (where panzers rumbled over the streets), accessed on 1/30/2017 from source.