In preparation for his senior thesis, Robert Myak recently traveled to Spain to investigate how the contention between modernity and the Catholic Church influenced the principal laic and ecclesiastical characters in Leopoldo Alas’s celebrated novel. 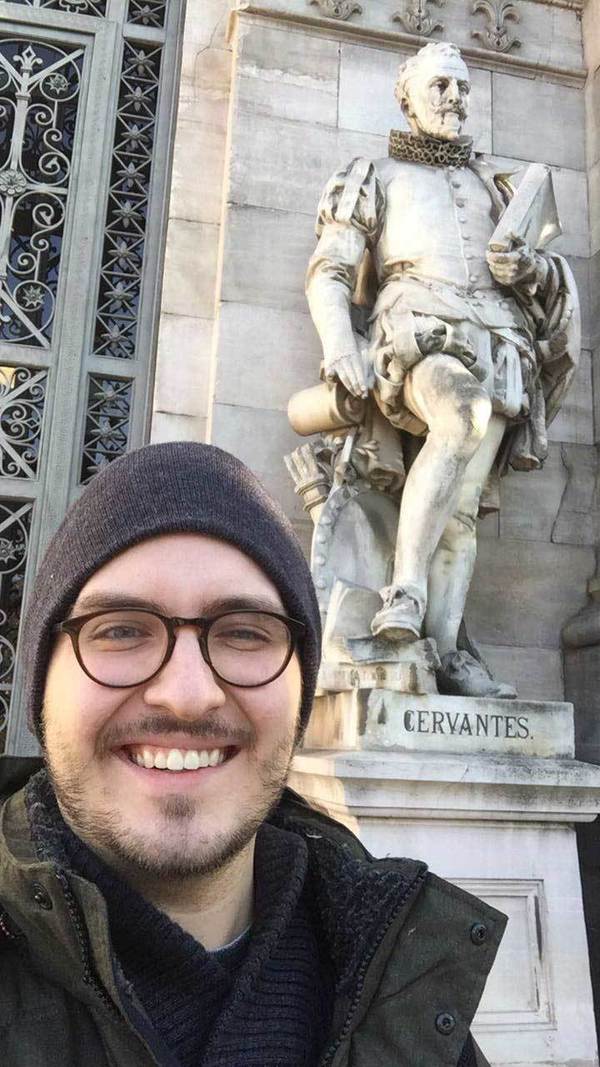 Previous interpretations of Leopoldo Alas’s celebrated novel, La Regenta, have largely focused on how Ana Ozores, the ultimately condemned female protagonist, attempts to escape Vetusta, a backward, hypocritical, and generally conservative society.  However, one’s sins reflect the world in which he or she lives, and Ana’s adultery does not make her an exception but rather the norm in her society.

Transpiring during the end of the Nineteenth Century, an epoch often referred to by the French term, fin de siècle, the novel constitutes one of the great European representations of two duplicitous intellectual realms, the hegemonic conservative realm of the Bourbon Restoration and the subversive but increasingly present “free thinking”, liberal realm.  Through archival research, personal interviews, and on-site research into the late 19th century sociohistorical and cultural milieu of Oviedo Spain, the goal of my research project was to explore how the contention between modernity and the Catholic Church influences the principal laic and ecclesiastical characters in Leopoldo Alas’s novel, especially the protagonist, Ana Ozores.

One of the principal U.S-American researcher of Leopoldo Alas’s La Regenta, Noël Valis, advised me to interview her colleague, Antonio Fernandez Insuela, and to visit certain libraries, archives, and historical sites in Oviedo to conduct my research.  Such research could help me combat the great challenge of this research project: the plethora of existing studies on the novel.  Past researchers of the novel have often approached it through an escapist lens, by proposing that through Ana’s adultery, she endeavors to transcend the prosaic lifestyle of Vetusta.  Initially, I planned on approaching the novel similarly but by considering avenues of dissidence in the novel, species of authoritarian rejection.  However, it became more and more apparent to me that this approach would not be entirely adequate because it would not entail the failed nature of the transgression.

Upon arriving to the Spanish capital, I began my research in the Biblioteca Nacional de España, the largest archive and library in Spain.  I began my research in the Sala de Cervantes, the space designated for the consultation of the library’s principal archival resources.  The library possesses a collection of Leopoldo Alas’s letters.  Despite fiendishly indecipherable calligraphy, I felt that their consultation was necessary, for several of the letters were stamped with a stamp from the Casino de Oviedo.  The Casino de Oviedo is an important site in the novel, and, after the Cathedral of Oviedo, its description is the most detailed of Alas’s novel.  The Casino functions effectively as a gentlemen’s club, an alternative realm, in which men are able to gather in the depths of the night and discuss illicit subjects, such as their sexual encounters, that would otherwise be considered taboo in public spaces during the day. In one of the letters, Leopoldo Alas wrote to María Guerrero, the actress that portrayed the protagonist of his only drama, Theresa.  Despite his generally kind tone, he does criticize her opening performance, a true reflection of Alas’s infamous periodical criticism.

Oviedo, the inspiration for the novel’s setting, proved invaluable to my research.  Visiting several important historic sites in the city, I familiarized myself with the Cathedral of Oviedo, a UNESCO World Heritage Site.  Given the novel’s anticlerical nature, one would not expect it to delve very deeply into the religious reliquary history.  However, one of the most fundamental relics of the Catholic Church, the Sudarium, is located within the Cathedral of Oviedo. The Church believes that the garment was wrapped around the head of the crucified Jesus Christ.  Despite the importance of the role of the Cathedral in Catholic history, nearly all of the novel’s clerical figures are lackluster, a suggestion of decayed religious devotion.  Furthermore, while in Oviedo, I had the opportunity to investigate at the University of Oviedo and meet Professor Antonio Fernandez Insuela, a Professor of Spanish Literature.  In order to understand the novel’s positioning in Spanish culture, we discussed how the novel was effectively forgotten after Alas’s death in 1901 and how the Francoist censorial boards never officially banned the novel, an important distinction because it is popularly believed that it was banned due its anticlericalism.  During the dictatorship, editions existed but were very expensive.  The novel became more easily accessible after Alianza Editorial published its affordable edition in 1966, during the early phase of Late Francoism, an era marked by general censorial changes.  After this year, Clarín’s popularity soared.  Furthermore, we discussed how it is wrong to reduce Fermín de Pas, Ana’s Confessor, to the sole villain of the novel, for, despite Ana’s best intentions, she has poor spiritual guidance, as she is surrounded by a team of villains.  While criticizing various aspects of Vetusian society, the working class and the University are largely omitted.  Fernandez Insuela suggests that these omissions reflect Leopoldo Alas’s own need to survive in his society.

The significance of my findings suggest that the novel’s protagonist, Ana, does not suffer her downfall through her extramarital relationship with Álvaro Mesía, as critics have often suggested.  However, through my research I found that Ana de Ozores adapts to her society through accepting her own conversion into a morally corrupt Vetustian.  Unlike characters such as Guimarán, Vetusta’s token atheist who readily breaks away from the societal norms, Ana actually adapts to them, largely abandoning her social development provided to her through her liberal education under her father.   According to this reading of the novel, it appears that Ana, like Leopoldo Alas, is actually bound to her conservative society, failing to fully transgress it despite her disdain for it.  These findings have provided for the new basis for my thesis.

This experience was fundamental to my academic and professional development for two principal reasons.  Pivotal to completing my thesis, my conversations with Spanish academics and on-site and archival research allowed me to better understand Leopoldo Alas’s complex novel.  Furthermore, as I begin to pursue graduate studies, reflections on my experience researching in Spain will provide a basis for my future humanities research.  While the experience was challenging because of the dense and often confusing bureaucracy, I improved my linguistic abilities and confidence.  My two weeks passed rapidly, but their imprint on my intellectual formation will surely be imperturbable.