Raymond Drause, a graduate student in the department of History, received The Katie Murphy McMahon Grant for Russian and East-Central European Studies for his archival research at the University of Tübingen. It contained a recently-discovered collection of sources about Russian-European relations in the early nineteenth century. He recently wrote to us to tell about his productive and rewarding trip:

Thanks to a generous grant from the Nanovic Institute for European Studies, I had the opportunity to travel to Germany in order to conduct research in the University of Tübingen’s archive from June 22nd through July 3rd.  It was a very successful trip.  The materials belonged to the historian Alexander Brückner, and pertained to the death of Tsar Alexander I and the subsequent succession crisis and Decembrist revolt by many officers in the Russian army.  The collection included materials in French, German, Latin, and Russian, and consisted mainly of handwritten notecards, an original manuscript of Brückner’s book Kaiser Pauls I Ende, several different newspapers, various elegiac poetry, and handwritten copies of correspondence.

The notecards, stuffed into dozens of envelopes, all pertained to eighteenth-century Russian history, particularly the reigns of Peter the Great and Catherine the Great.  The materials were most likely Brückner’s notes for his books about each monarch.  The manuscript for Brückner’s book about Tsar Paul contained minimal editing.

The newspapers dated from 1825 and 1826, and included stories about the funeral procession of the late tsar, as well as the doomed uprising of December 14, 1825.  Based on the stories lined in the newspapers, I hypothesize that the previous owner (possibly Brückner himself) was quite interested in how the Decembrist revolt was represented in the European press.  Stories in Russian newspapers that related the Russian government’s version of events were not lined, further supporting the hypothesis. 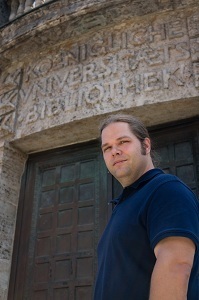 The poetry was remarkable in its consistent effort to depict Alexander as an angelic, ethereal being and as the savior of Europe for his role in the defeat of Napoleon.  It underscored the concerted effort of royal censors to ensure that the late tsar’s legacy would be mythologized properly.  One interesting piece of corroboratory evidence in the collection was a ticket to the 1834 opening ceremony of the Alexander column, still standing in Saint Petersburg, which depicts him as an angel.

The handwritten copies of correspondence mostly pertained to the health and mental state of the tsar’s widow, Elizabeth, who died soon after her husband.  Another remarkable document was an eight-page account of the Decembrist uprising written by a purported witness, and was written in different hand from the other correspondence, suggesting that it was an original document.

The research I conducted in Tübingen has greatly assisted me in my dissertation pursuits.  In an effort to understand better the relationship between Russia and Europe in the early nineteenth century, I have sought evidence of an active Russian engagement with European press and concern about how the country is depicted abroad.  Furthermore, the document about the Decembrist uprising has thus far eluded scholarly analysis, and will provide further evidence of how European political thought influenced nineteenth-century Russians’ aspirations for their own country, if not necessarily with the desired results.  The reign of Alexander’s successor Tsar Nicholas is considered to have been one of strict censorship, mostly because of the trauma of the military uprising, and one in which ideas that might be considered too radical were silenced.  However, the evidence suggests a continuing and robust, if somewhat muted by necessity, Russian engagement with European ideas.  During the reign of Alexander II, Nicholas’ successor, these ideas would culminate with the liberation of the serfs, an increase in popular political activism that ultimately led to the tsar’s assassination, and the crucial years of social upheaval that would finally boil over in 1917.

I again wish to thank the Nanovic Institute for its generous support of my research.