Peter Fink ('17) is an American Studies and Arts & Letters Pre-Health major who also happens to have Celiac Disease. Shortly after his diagnosis, Peter discovered that Ireland has one of the highest rates of Celiac Disease in the world, and that it is the current leader in tax relief programs available to those affected by the disease. Curious about the political, social, and economic factors in Ireland that impact its accomodation to Celiacs, he wrote a proposal for a research trip over winter break. The Nanovic Institute awarded him a Break Travel and Research Grant for Sophomores and Juniors, and away he went! He recently wrote to us about his experience.

My Nanovic Winter Break Grant in Ireland was an absolutely eye-opening experience in which I had the chance to study Celiac Disease, an autoimmune disorder of the small intestine that affects me as well as thousands of others.  The disease is most common in Ireland and is thus dealt with differently than it is in the United States, and for this reason I spent a week in Ireland researching the medical, political, and social implications of the disease in Ireland.

One of the first things I did once in Dublin was meet with Professor Whelan from the University of Notre Dame Keough Naughton Institute.  Professor Whelan kindly acquainted me with the city and provided me with detailed information about where I could access the best resources for my research.  In addition, he was able to explain to me, as a resident of Dublin, how Celiac Disease is known along with Cystic Fibrosis as a “Celtic disease” among people in Ireland, as it affects people of Celtic ancestry more than any other background.  Throughout the week, I would come to see how this adoption and recognition of the disease as a component of the peoples’ heritage was largely responsible for a significant awareness of the disease in Irish society.

After visiting with Professor Whelan, I followed his advice and made my way to the National Library of Ireland (NLI), where, because of my grant from the Nanovic Institute and studentship at the University of Notre Dame, I was given a guest research pass that allowed me to access the library’s countless resources.  It was here that I was able to obtain valuable information and details about the nation’s health system and involvement in the European Union—two things that significantly impact policy regarding Celiac Disease.  The next day, I met with Dr. Patrick O’Mahoney from the Food Safety Authority in Ireland (FSAI) to learn more about the process of food regulation that is so crucial to properly confronting Celiac Disease.

Dr. O’Mahoney was not only incredibly kind but also extremely informative; as Chief Specialist of Food Technology of the FSAI, he took the time to have a thorough discussion with me about Ireland’s allergy regulations, explaining that a new law passed only a month previous to my visit was responsible for the displaying of allergens on even non-packaged food.  From my experience in the country, this law seemed to single-handedly make the biggest positive difference for someone with Celiac Disease or any other nutritional illness, and demonstrated to me the power that a country’s legislation can have on its citizens’ health.

After having the opportunity to meet and consult a number of academic resources, I wanted to examine how Celiac Disease was dealt with and perceived in the context of “everyday” society. To do this, I traveled to Killiney, a suburb of Dublin.  I made it my goal to engage in dialogue with locals, and as a result gained a new perspective of Celiac in Ireland: not only did everyone I talked with know about the Disease and what it entailed, but a number of individuals actually told me that they believed they had the disease themselves and were waiting to be screened.  This confirmed to me that Celiac Disease is very much in the current conscience of Ireland’s society. 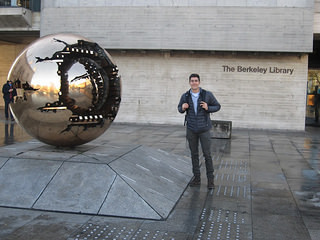 Another aspect about Celiac Disease in its “epicenter” I wanted to learn about was its anthropological and biological history.  Given that it is a genetic disease, I believe understanding its scientific mechanisms as well as its evolutionary history is absolutely crucial to its effective treatment.  Thus, I visited Trinity College’s state-of-the-art Berkely Library, and once again, thanks to my funding from the Nanovic Institute at the University of Notre Dame, was granted access to their incredible network of books, articles, and scientific journals that are normally open exclusively to only students at the school.  Reading about the science behind Celiac Disease was an incredibly neat and gratifying way in which I was able to apply my pre-medical studies at the University of Notre Dame.  Only because of my biology, chemistry, and anthropology classes during my past academic semesters at Notre Dame was I able to read through and interpret the professional material I had been given access to in a comprehensive and well-informed manner. I also had the privilege to meet with Grainne Denning, the CEO of the Coeliac Society of Ireland, and just like the previous meetings on my trip, I was both warmly received and thoroughly educated.  Ms. Denning was able to explain to me in detail the political atmosphere and regard of Celiac Disease in Ireland, including the government’s tax relief program and the Coeliac Society’s renewed and increased efforts to provide education and easier screening resources to medical professionals.  She also illuminated areas in which improvement was needed, highlighting to me the fact that despite what I may read about online and perceive as a foreigner, there are major gaps between the planning and execution of regulations aiding those with Coeliac Disease.Lastly, I traveled to Belfast, Northern Ireland to visit Mr. Derek Thompson and his wife Mrs. Tina Thompson, founders of Gluten Free Ireland, a website database that lists celiac-friendly restaurants and venders on the island by location and provides education and awareness about Celiac Disease to the public.  I learned how the Internet and social media can be powerful tools in treating a disease.  Also, in one day in this new location, it became immediately evident that disease and health are largely affected by culture—although just a short train ride away, this region had different regulations that changed the way Celiac Disease was confronted and treated. 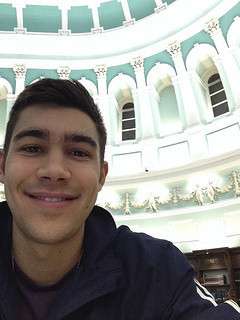 In providing me with the opportunity to travel to Ireland over winter break, the Nanovic Institute gave me the chance to study first-hand a disease that impacts not only my own life but also the lives of thousands of others.  I was able to meet with some of the top professors, doctors, and directors who deal with Celiac Disease in the region of the world where it is most prominent as well as access a vast amount of resources from renown institutions in order to begin to develop a comprehensive and intricate understanding of the disease.  Not only did I learn so much more than I ever could have from home or on the internet, but I have also returned with many new questions that I am excited about exploring in my studies at Notre Dame and beyond.  In addition, researching Celiac Disease through the Nanovic Institute’s winter break grant has inspired me to continue my career aspirations in medicine with a new energy and focus and a more informed and worldly viewpoint. All of the academic, cultural, or experiential knowledge I gained is thanks to the Nanovic Instute at the University of Notre Dame’s generosity, and for that I want to say go raibh maith agat, or many thanks, and Go Irish!