Every year, the Nanovic Institute for European Studies at the University of Notre Dame awards grants to well over 100 graduate and undergraduate students.  These students use their grants to conduct independent research in Europe, to complete European internships and service projects, to strengthen their fluency in a European language, and to present their European Studies papers at academic and professional conferences.  They then come back to campus with some wonderful stories and images.  We plan to share them with you.  Today, we give you our first grant recipient of the 2013 - 2014 academic year:  Nathaniel Myers. 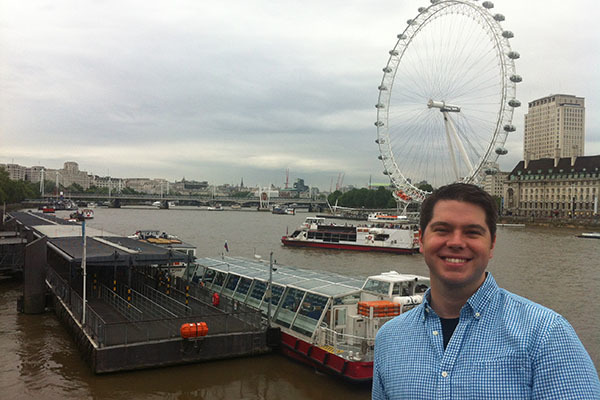 Rock and roll, and poetry: these were two of the topics I discussed with Pulitzer Prize-winning poet and The New Yorker poetry editor Paul Muldoon. But rock and roll and poetry might also aptly characterize my conference and research travel as a whole. From Manchester to London, with a day trip to the archives in Oxford, the work I undertook made me feel like a rock star among rock gods. In Manchester, I delivered a paper entitled “The Affective Materials of Elegiac Language: Denise Riley’s ‘A Part Song’ and Paul Muldoon’s ‘Sillyhow Stride’” and received feedback from top scholars and poets in the field, academics from British universities with whom, as an American, I rarely traffic. In London and Oxford, I pored over small press publications and manuscripts that shed light – sometimes surprisingly – on the themes and topics of my dissertation. And over the course of the trip, I spoke with two poets, Muldoon and Denise Riley, both of whom generously shared their thoughts and insights – insights that will guarantee my work offers unique interventions into elegy studies specifically and into the field of British and Irish contemporary poetry more generally.

The trip began in Manchester at the Third British and Irish Contemporary Poetry Conference. Two moments stick out from the weekend (although to cite only two moments, after excellent keynote lectures by poet Don Paterson and scholar Matthew Campbell and a handful of invigorating panel sessions, is to do the conference a certain injustice). The first was my own panel, which generated one of the most rewarding Q and A sessions I have ever participated in. Poet-academic David Wheatley, for example, offered specific thoughts about the genre of elegy and its sister genre of the lamentation that were directly pertinent to my project; and Professor Matthew Campbell, who delivered a keynote, facilitated a broader discussion about the central issues of poetry criticism in the new generation of scholars, of which, however generously, he considered me and my panel mates. For obvious reasons, I felt the pulse of a living and developing field of academic inquiry.

Manchester also brought a one-on-one conversation with Paul Muldoon, who is the focus of the fourth chapter of my dissertation. We really did discuss rock music and rock lyrics – his most recent publication, The Word on the Street, is a collection of the lyrics he has written for his band The Wayside Shrines. But the discussion about rock lyricism and its relation to poetry was really a discussion about the marginalization of poetry in contemporary culture, a topic that any responsible poetry scholar cannot ignore. And it was also a discussion about linguistic style, and the use of cliché in both rock and poetic lyric; and thus it was directly pertinent to my work on Muldoon’s elegies, in which he uses cliché to juxtapose the startlingly mundane or the jarringly humorous with the gravitas and severity of death. As I realized during my travel, this use of cliché is a technique that Muldoon shares with Denise Riley, the other poet I interviewed, whose work is the focus of my dissertation’s final chapter. In her home in Northern London, Riley and I also discussed cliché, but we additionally talked of her work on language and affect theory, work which I believe paves the way for future approaches to poetic lyric, or, at the very least, which provides the theoretical underpinning of my own project. She sent along a few of her forthcoming poems, and we talked over how these poems were expanding some of the themes of her recent elegies for her son. Admittedly, and somewhat embarrassingly, I felt very privileged by what she was willing to divulge in terms of her current work, but also in terms of her experience of grief after her child’s accidental death. The challenge before me is in finding a way to present this material conscientiously and considerately.

In London and Oxford, I spent most of my time hunched over various texts. British poetry in the latter half of the twentieth-century is marked by the small press publications in which more experimental and avant-garde poets dispersed their work, usually in printings of no more than 100 or 150 copies. It was exciting, then, to look over Riley’s first two publications in the British Library, Marxism for Infants (1977) and No Fee (1979), collections that were literally photocopied and stapled together. Equally thrilling, if not more, were the manuscripts and drafts of the World War I poet Wilfred Owen found in the English Faculty Library at Oxford University. Owen’s poetry, while not a direct focus for my dissertation, nevertheless permeates the project, especially through Muldoon, who cites him as a direct influence. I also expect him to be one of the focuses of my next project, which takes a longer historical view of the relationship between language, affect and elegy by examining poets from the first half of the century. Since one of my arguments about Owen is that he attempts to enact the experience of war through the sounds and rhythms of his poetry, I was pleased to track his revisions of poems like “Dulce et Decorum Est” and “Anthem for Doomed Youth.” And it goes without saying my sense of shock in finding a marginal note in which he suggests one early possible name for his collection of poetry: “English Elegies.”

Ultimately, then, the trip, both in terms of the conference and the research, proved uniquely rewarding. I would like to thank Dr. Anthony Monta and the Nanovic Institute for European Studies for their support in making the trip possible. I would also like to extend special thanks to Jennifer Fulton for her guidance and encouragement. I am deeply appreciative for the ten days I spent abroad, carrying out work that has already invigorated this project as well as future ones, and that will help guarantee the indisputable relevance of them.