Refugees are people, not a crisis. Michael McRoskey ('18), a Computer Science major, received a Summer Travel and Research Grant to experience and research the refugee crisis in Europe first-hand. While there, he encountered Europe’s refugees and the people who welcome them on the shores, in the camps, and within the cities. Michael recently wrote to us about his experience:

This summer, I met refugees face-to-face and learned about borders and migration in the European Union, destabilizing world conflicts, and US foreign policy in the Middle East. But beyond the facts and figures, I heard the most incredible stories from people who had been through so much--people escaping ISIS, fleeing from the Taliban, facing discrimination in new countries and risking their lives for the chance of a better life for their families. Those stories made me question how similar I would act in their situation and realize how blessed I am to hold a passport with the “United States of America” on it. 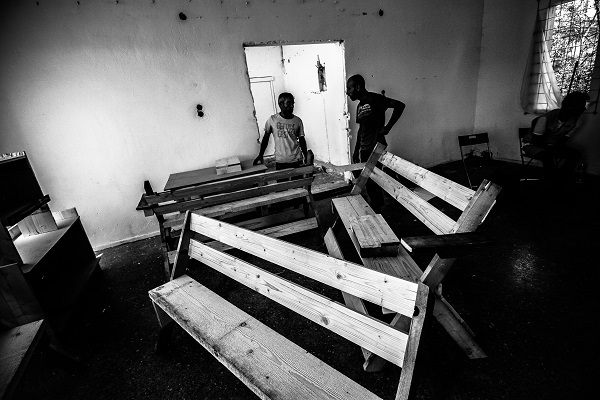 For eight weeks, I travelled throughout Europe and to Washington, DC to learn more about the causes, effects, and responses to refugees in Italy, Greece, Germany, Sweden, and the United States. During a summer involving multiple terrorist attacks attributed to asylum-seekers, I learned about the concerns native citizens and politicians face when opening borders and the consequences of keeping them closed. I worked in a refugee camp, heard the Italian President speak on migrants, visited a tiny Catholic town in Germany with the lowest unemployment rate in the world, spoke with representatives from the US Department of State, and connected with the men and women who settle refugees in their local towns across America. I listened to people talk in Italian, Greek, German, Swedish, Spanish, Arabic, Farsi, Urdu, and Mandarin and made lasting friendships with Muslims, Christians, and atheists alike. 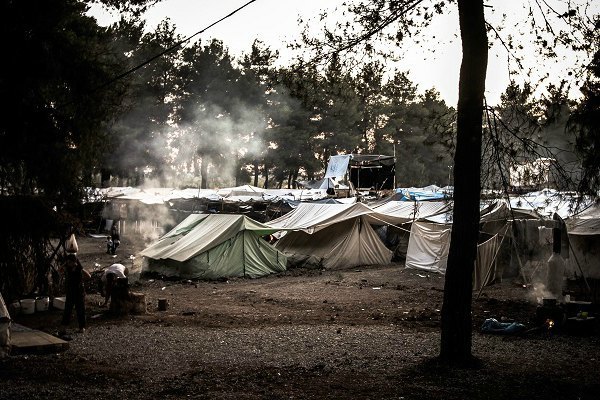 When I came home, I had more questions than answers but found myself spending most of my time telling people about my experience in a refugee camp in Greece. The common thought I felt there was: “These people are just like me, this guy could be my next door neighbor” and I found that powerful for changing someone’s heart. Like me, these refugees have smartphones, use Facebook, and are on the lookout for the best wifi. Life me, they listen to Enrique Iglesias, watch Angelina Jolie movies, and had homes with grassy front yards. Like me, many enjoy sports, speak English, study engineering, and seek fulfilling work. Like me, the refugees have families they love and risk their own lives for them. With all these similarities, I really questioned why these people had arrived here in the first place. How could such industrial, educated people end up living in tents in a camp without plumbing or electricity?

The truth was that, unlike me, these people had suffered through some of the most violent, traumatizing, and frustrating years of their lives and were now stuck in a country facing more problems than it could handle. Having fled from persecution and warfare, each man, woman, and child in Ritsona had made the treacherous journey by boat from Turkey to Greece with the hope of beginning a new life in Europe. Many had sold everything they owned to make the journey possible, blindly trusting smugglers to point them toward Greece and hoping not to suffer abuse or losses on the way. Unlike me, the country on their passports didn’t grant them freedom of movement. It wasn’t until later that I realized even the hundreds of devastated people I had met there were just a fraction of the millions others who had escaped Syria, Afghanistan, and Iraq; and even those who had escaped paled in comparison to the poor, uneducated, second-class citizens left behind. Those people--the ones without enough money to get out--are the ones we today see in photos from Aleppo. 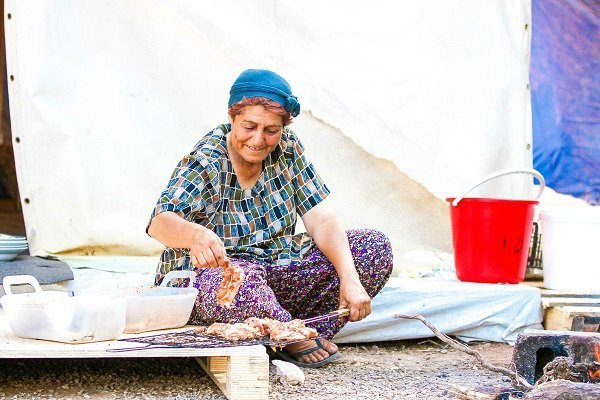 Still, these people were some of the most welcoming, hospitable people I had met. The children were all smiles and loved to hop on your back, whether you were expecting it or not, for an improvised “piggy-back” around the nearby abandoned building. As the sun would set, we would walk on the dirt path around the tents, watching mothers stoking campfire flames during Ramadan. Invariably, someone would invite us inside their tent and serve a grand feast, cooked over kindled brush and made out of the simplest ingredients available. They asked about America, spoke about home, and conveyed their frustration living in this camp. Temperatures there regularly rose above 100 degrees Fahrenheit, but there was no “indoors” or air-conditioning. Despite the camp being “open,” its location sat a three-hour walk away from the nearest gas station and was home to many snakes, insects, and wild animals. There were two showers for around 800 people--one for men and one for women--and sanitation consisted of portable plastic toilets from which flies escaped each time you opened the door. Each family was allotted two bottles of cold water a day, but people would beg us daily for more. How strange it was as a 20-year-old, having been in the camp for just a day, to tell a 40- or 50-year-old resident he can’t have something like cold water! And do I blame the child for climbing over the barrier to get underneath the shade we volunteers enjoyed? How do you deal with teenagers in camp with nothing to do each day but act out their untreated PTSD?

It was through this struggle that I developed a rather tricky question: in administering aid, how do you balance the need for order, fairness, severity, and equal treatment for the masses with the merciful, nurturing, humane qualities of caring for the individual? So often throughout the trip, we met with small NGOs with bleeding hearts that worked on a very local level--they listened to the personal stories and offered friendship, community, and love to these people, something a government could not do. Conversely, in working with large organizations and government workers, we understood that despite thinly-stretched resources, they still held individuals to high standards of conduct and needed to make tough decisions and distinctions--a time for the food distribution to close, an age of ineligible legal protection, a nationality that was prioritized for being “more in need,” a decision on who gets to go to the emergency room. It was a tough balance. In each case, no doubt someone was left on the other side of the margin, someone was left behind. How could you help everyone the right way? It seemed you couldn’t. 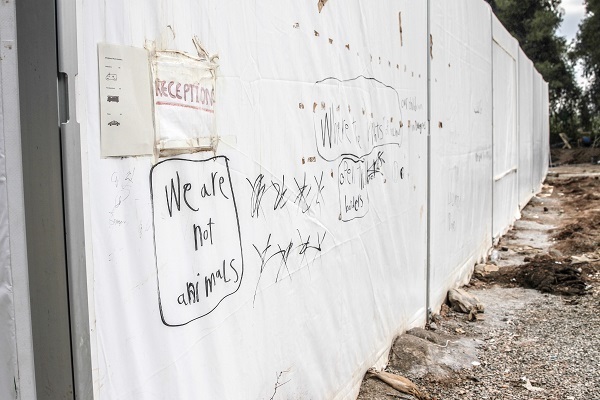 I stepped away from the camp somewhat depressed. One of the residents was right: I really couldn’t make a difference for him, I was just a “tourist.” Pretty much all I could do was sympathize with Facebook messages about how unfortunate his circumstances were. The political landscape wasn’t looking promising either--Brexit had just happened and already the Balkan countries had sealed their borders, preventing land routes into northern Europe. Cities in the US were already dealing with urban housing issues, tense race relations, and terrorism concerns--why bring in a group of unknown, vulnerable people? Besides, the US seemed pretty removed from it all.

When headlines did hit the news, it was upsetting for me to see so many people at home being moved by media representations of refugees when it was convenient but using the media’s synthesis, spin, and vilification to justify xenophobic attitudes otherwise. It was upsetting that those people hadn’t had the dignifying human encounter with the men and women I had just experienced; they simply hadn’t heard the full story. It was perhaps most upsetting, however, that I couldn’t actually help those refugee men and women where they were.

Thankfully, upon arriving home, someone gave me a much-needed perspective after dealing with weeks of depressing and seemingly hopeless situations. He told me, “This crisis is not your fault and you will not fix it, but that doesn’t mean you can’t do anything.” And that was the answer I needed for my question: I couldn’t make a difference in everyone’s lives, but I could sure help one person, I could change one mind. My goal became suddenly to share who the refugees really are, not just what’s seen in the media. I wanted to phrase stories in people’s own terms to draw on that likeness I had experienced before: would you do anything for your child? Like you, these parents are fleeing for their children’s sake. How would you feel standing in a DMV line for four hours or even four years? Like you, these people are frustrated with government barriers. How would you act if you woke up each day with nothing to do but sit outside in the heat and think? Like you, these people are educated and proficient, but have nothing to do. This call for empathy has effectively shaped my discourse with friends and family recently, and has been very powerful--when you think about someone foreign on your own terms, you begin to understand their plight, and act on it.

This summer challenged me to analyze an issue from a variety of angles--an experience that ultimately caused me to grow in empathy. Once I encountered the subjects of these headlines face-to-face, I saw how complicated issues of religion, politics, borders, and humanitarian aid actually were; there are relatable, lovable, human people behind them. The photos and statistics I had published online months before my experience became very real as I encountered victims of a violence mostly unknown to Western citizens. This experience put things in perspective and helped me realize the complexities behind both sides of the forced migration debate, as well as how we as Catholics should respond. I’m very grateful and humbled by the many professors, mentors, and volunteers who generously shared hours of their time to help us learn about this issue and hope to pass it on by challenging others to encounter the unknown, the face-to-face, and to recognize our shared humanity.