Matthew Kibler is a Sophomore majoring in philosophy and chemical engineering.  The Nanovic Institute awarded Matthew a Break Travel and Research Grant for Sophomores and Juniors to conduct research on the phenomenological perspectives of impressionst and post-impressionist art.  He traveled to Paris over fall break.  Matthew recently wrote about his experience: 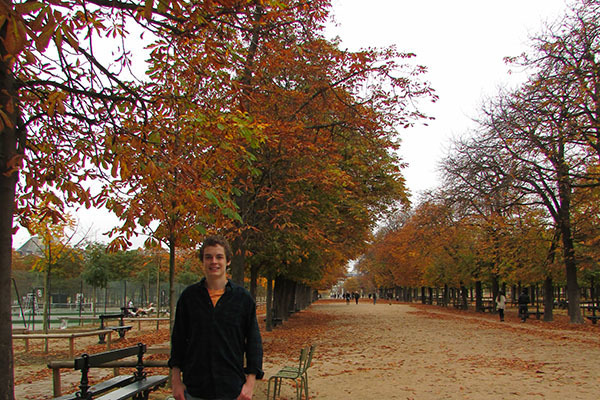 I departed for Paris over fall break hoping to gain access to the textual sources and paintings that would enable me to answer my question about the relation between the artists that phenomenologists identified as philosophically relevant and the impressionist tradition out of which these artists worked.  While I left Paris having gathered the information that will serve as the substantive basis of my discussion of this question in my term paper for Continental Philosophy, my time in Paris did not simply allow me to develop answers to the questions that I brought to the city.  Instead, my work in Paris led me to expand upon my original project and make connections that I could not have made studying art and philosophy at Notre Dame, and introduced me to a range of academic resources that will greatly enhance my study abroad experience in Paris next semester.

While direct access to the works of the artists that Merleau-Ponty and other philosophers identified with their phenomenological project proved instrumental as I developed answers to the questions that I had departed with, the location of these works within the broader context of the museum enabled me to connect my project with artists that I would not otherwise have identified as relevant.  For example, I found that the scientific perspective that served as the structural framework of Monet’s early landscapes was also a salient feature in the works of other early impressionists such as Pissarro.  Insofar as Monet’s later works seemed to negate the importance of scientific perspective, his artistic development can be interpreted as a break from the conventions of impressionism.  This observation led me to expand my original question about the phenomenological self-awareness of the impressionists to include a component about how this self-awareness changed over time.  In the paper that will serve as the culmination of my work in France, I hope to relate this developing self-awareness to the developing artistic, technological, and cultural milieu in which it occurred by interpreting my observations in terms of the insights made by philosophers such as Martin Heidegger and Walter Benjamin.

In addition to providing the research experience that will serve as a foundation of the more extensive philosophical research that I plan to pursue next semester while studying abroad in Paris, my stay in France exposed me to a range of resources available outside of my host university.  Through my conversations with philosophy students currently pursuing their graduate work in Paris, I formed connections that will enable me to engage in an academic discourse that extends beyond the lecture environment of the classroom.  These conversations also proved enlightening insofar as they introduced me to a number of academic resources in Paris.  I am most excited by the prospect of attending the public lecture series occurring at prominent Parisian universities that bring together scholars working on a range of topics in Continental philosophy.  After having completed my work over fall break, I cannot wait to return to Paris next semester in order to continue studying the questions that drove my research over fall break in a vibrant intellectual environment where exposure to lectures and the extensive network of libraries and museums that I have just begun to take advantage of will spawn new questions and projects.