Leah Billion ('17), a double-major in The Program of Liberal Studies and Spanish, is new to our Student Spotlight today! She travelled to Athens last summer to conduct research on the ethics of restoration of ancient Greek monuments, compliments of The Snider Family Endowment for Excellence in European Studies. Her Nanovic grant not only allowed her to conduct her research, it also placed her in Greece in the midst of its economic crisis. She recently wrote to us about her research experience, but also noted what it was like to be in Greece in the summer of 2015: 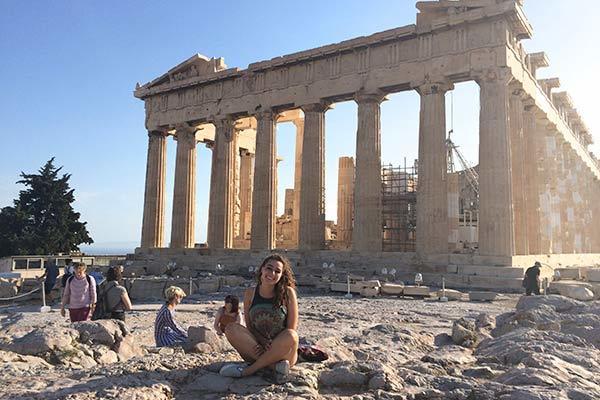 Thanks to the generosity of the Nanovic Institute for European Studies, through The Snider Family Endowment for Excellence in European Studies, I spent my summer in Greece researching The Ethics of Restoration of Ancient Greek Monuments. This grant allowed me to visit countless ancient monuments and sites, including the Acropolis, the Temple of Poseidon, the Agora, the Olympic Stadium, the Arch of Hadrian, and various others. I was also able to spend ample time in world-class museums like the Acropolis Museum, the National Archeological Museum, and the Museum of Cycladic Art. The city of Athens as a whole acts as a relic, scattered with ancient ruins and churches around every corner.

In the future, I plan to go into international and human rights law. My interest in this field served as inspiration for my project. My research delved into issues of property rights of ancient structures, artistic ownership, and human rights of the deceased. I thoroughly enjoyed my exploration of these topics, and I will be further pursuing my interest in international and human rights law this Fall as I sit in on two law school classes in this field. Furthermore, I plan to use this research as the basis for my senior thesis, which will look at the ethics of restoration in other geographical regions (specifically Spain, where I will be spending the upcoming Spring semester).

I cannot sufficiently express my immense gratitude to the Nanovic Institute for European Studies and The Snider Family Endowment for Excellence in European Studies for providing me with the most intellectually and personally enriching experience of my life. (It should be noted that learned some Greek, had amazing food, and witnessed breathtaking views along the way.)

A NOTE ON THE GREEK ECONOMIC SITUATION

When I arranged this trip, I of course had no idea that I would be spending my summer in the midst of the Greek economic crisis. While it does not relate directly to my research, I think it would be absurd to leave this experience out of my report. I would like to share a few of my observations from the Greek economic turmoil. When the Greek banks closed, I received countless emails from the U.S. Embassy and Notre Dame representatives. The news headlines were dramatic and struck panic into both locals and tourists. The overall feel on the streets and the metro was eerie; the fast-paced, social atmosphere of Athens was replaced by silence. People were commuting to their jobs, not knowing when, or even if, they would be paid for their work. Public transportation became free. Makeshift signs of notebook paper and pencil hung around the metro stations, telling commuters that tickets were no longer necessary due to the situation.

The lines at ATMs were constant and long, and many ATMs ran out of money completely. Greeks were only allowed to withdraw 60 Euro per day. However, most ATMs only had 50-euro bills, nothing smaller, decreasing the possible withdrawal to 50 Euro. With little money in circulation, shops did not have enough small bills to make change, and could not accept the 50s that people got from the ATMs. The credit card machines at many shops could not connect to the banks, making transactions impossible at various establishments.

The cap on Greek account withdrawals was enforced even for people travelling around Greece and abroad. This meant that people were stranded in other cities and countries, unable to retrieve enough money to feasibly get through the day. Furthermore, many Greeks with dual citizenship packed up and left, some with no intention of coming back. For example, one family that I know left for an indefinite stay in Norway.

I saw a sign in a hotel window that read, “If you run out of money and you have no place to stay, you have our hospitality for as long as you need.” This was a beautiful example of Greek hospitality amongst great unrest and uncertainty. Not all people reacted to the situation with kindness; the prevalence of pickpocketing and theft increased as people became more desperate.

There were demonstrations around Athens on a daily basis. I once found myself in the middle of an “Oxi” or “No” demonstration on my walk back to my apartment. There were thousands of people gathered to protest against austerity. I heard performances by various famous Greek musicians in support of the “Oxi” or “No” vote, and I also listened to a speech by the prime minister of Greece, Alexis Tsipras. While I could barely move through the myriad people, the crowd was overall very peaceful and calm. News sources described the demonstration as violent and chaotic, but I had a completely different experience.

Among other things, I learned that day that the media very often misconstrues the truth in their headlines. I also witnessed this disappointing fact when various news sources incorrectly reported the terms of the Greek vote of July 5, 2015. Headlines said that Greeks were voting whether or not they would “stay in the Eurozone”. In fact, this was not what the vote was at all. A “no” vote rejected the austerity terms in discussion, and a “yes” vote accepted those terms. Neither side would lead to an immediate exit from the Eurozone. However, these incorrect headlines struck fear and confusion into the Greek public, while also misinforming the world population. Witnessing the Greek economic situation firsthand, I was disappointed in the poor reporting and false information offered by leading, trusted news sources.

Overall, it was an intriguing time to be in Greece. Interestingly, the restoration of ancient monuments like the Acropolis is funded by the EU. As the economic crisis was being navigated, restoration workers were not sure if their work would be postponed or continued. I hope that the future brings stability for the Greek economy. I will not forget the tension, worry, and discontent that I witnessed during my stay.

[1] This archeologist requested that his name and affiliated museum remain anonymous in my report.