Meet Kelly Smith ('18), one of the two recipients of the FYS (First Year Studies) Spring Break Travel and Research Grant awarded by the Nanovic Institute this past year. Kelly is a History major who traveled to London to research the Kindertransport internees of World War II. She certainly learned about the subject, but she also understands perfectly part of the purpose of the FYS Grant: to help students learn how to conduct research in Europe, in the midst of a foreign culture. She recently wrote to us about her experience. 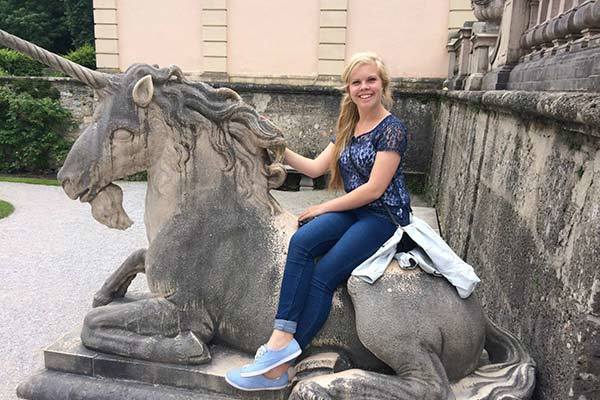 The moment I stepped out of the tube station and into the London sunlight, I could tell that I stuck out like a star-spangled thumb.  Despite my resolution to blend in with the London locals, I naively displayed blatantly American habits of walking on the right side of the street and eating hamburgers without a knife and fork.  I knew there would be quirky cultural nuances that I could only learn in my time in London, but after accidentally pouring Caesar salad dressing into my afternoon tea under the assumption that it was creamer, I began to feel slightly dubious about my ability to adapt.  However, this discouragement was put into perspective once I dived into my research on the Kindertransport internees.  As I studied the plight of these refugee children in the archives of London, I discovered a wealth of information on their experience and found that my flubs were not detrimental, but, rather, opportunities to learn about research in a foreign country.

The Kindertransport internees are the teenagers who were brought into Britain to escape the Nazi regime of Germany and Austria, but were then placed into internment camps on suspicion of being enemy aliens. The irony of child refugees being treated as potential threats to national security intrigued me, and my travels in London were ordered around finding more information on the causes and consequences of this paranoia. The London Metropolitan Archives and The National Archives at the Kew provided me with broad, policy-based information on this topic. It was in these archives that I received the opportunity to hold and read documents that were typed in the 1930’s. Needless to say, I was in history buff heaven. However, the bliss of flipping through minutes of board meetings and pages of periodicals was not the pinnacle of my research. The most absorbing source was the Refugee Voice Collection in the Wiener Library. This collection featured interviews from a wide breadth of World War II refugees in Britain, including some Kindertransport internees. It was in these videos that I learned the real triumphs and difficulties of being sent to a foreign country with an unfamiliar culture and language. It was incredibly humbling to hear about the ways they overcame adversity and language barriers to assimilate into British culture and remain optimistic despite their turbulent circumstances.

In addition to growing in knowledge about these refugees, my time buried in books taught me the proper way to conduct archival research.  While I had done some preemptive investigation on the suggestions and requirements of the archives, actually working in them was a much more direct education.  I secured multiple History Cards to access original documents, and I learned how to effectively search archival databases for the most pertinent records.  I also familiarized myself with the process of retrieving documents, as well as the many rules of handling them. For example, I was genuinely surprised to be informed that the only writing utensils allowed in reading rooms were pencils without erasers, and now I know to bring a pack of these on future research trips.  These details, such as allowing nothing but your hands and utensils provided by the archives to touch the records, might seem like common sense to a veteran researcher, but they constantly surprised me. Similarly to my experiences learning the nuances of British culture, working in the archives transformed me into a more practiced and purposed researcher. I developed on-the-ground experience, and this will prove to be immensely helpful to my future academic and professional career.

In my time as an undergraduate student at Notre Dame, I plan to major in history, and the research skills I developed while in London will be crucial to my growth in this discipline. Also, the interviews I had access to in my time at the Wiener Library could potentially supplement my senior thesis. Familiarity with primary sources, such as the copies of camp newspapers written by internees I read in The National Archives at the Kew, will be invaluable to my anticipated career as a museum curator. Research is a key component to a successful career as a curator, and to be able to gain experience in the field as a freshman in college is an instrumental advantage granted to me through the generosity of the Nanovic Institute of European Studies.

I am incredibly grateful for this opportunity to travel to London to advance my knowledge in my field and develop skills that will be necessary for my career. This research experience gave me insight into effective methods of research, as well as instructing me in research etiquette. I was able to delve into the policies behind treatment of child refugees in World War II Britain, as well as the personal stories of those children themselves. Their tales reassured me that it is possible to adjust and thrive in a new place, no matter the hardship to be faced. If they could learn English and survive in internment camps alongside the Nazis they fled from, I could most certainly learn how to correctly pronounce “Gloucester” and try a dubious-looking steak and ale pie. It was an unforgettable week of eye-opening learning experiences, and when I first exited the taxi into the perma-cloud of Notre Dame, I found myself running into people because I was walking on the left side of the sidewalk.