Ēriks Ešenvalds is a rising star in the constellation of 21st-century choral music. Justin Appel, a graduate student in the Sacred Music department, received a Graduate Summer Travel and Research Grant  to travel to Latvia to examine Ešenvald’s identity as a composer from a distinct place and culture. Justin recently wrote to us about his experience:

The choral music of Ēriks Ešenvalds has made great inroads into American choral culture, due to the lush and atmospheric qualities heard in many of his compositions. Further study of his work reveals surprising variety - from stark modernistic techniques to powerful orchestral writing, with a unique melodic stamp. What is the complete nature of this composer’s ouvre? How does his identity as a Latvian composer shape his music? What elements of Latvian culture, history, and national consciousness contribute to his art? How does contextualizing Ešenvalds’ work culturally affect the reception of his music?

As a choral conductor, I have always been struck by the unique qualities of Ēriks Ešenvalds’ music — melodic strength, stylish and self-conscious voice-leading, a sense of movement-in-stasis, and a broad selection of textual materials. These qualities set his music apart from many of his contemporaries, and merit further study. To date, only a small handful of articles have been written about Ešenvalds, and these pieces tend to analyze specific and limited works or describe his compositional style purely in terms of technical features. This lacuna exists in spite of the presence of at least one doctoral thesis on his music. What seems to be wholly lacking from the literature, is an account of Ešenvalds as a Latvian composer: an artist formed by specific cultural, political, and historical forces. Since I plan to write a doctoral thesis on Ešenvalds’ choral work, I wanted to travel to Latvia and learn something practical about the Latvian musical context. 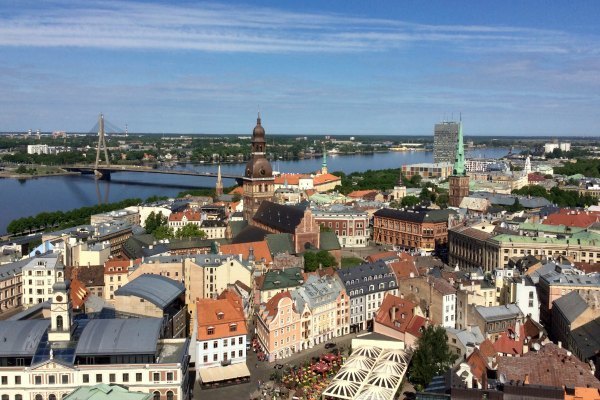 During my trip to Latvia, I stayed in the center of Old Town Riga, the heart of the medieval city. I visited a large number of museums and cultural sites in the city in an attempt to understand Latvian history. Since the late 19th century, a movement of national awareness and national identity caused Latvians to collect historical artifacts and to set up a plethora of museums, primarily with the motivation of educating young Latvians about their cultural past. I was able to visit museums that chronicled the historical development of Latvian culture and politics, its history of wars, its fledgling statehood in the early 20th century, its occupation by the Nazis and the Red Army, and its deliverance from Soviet control in 1990. I was also able to get a sense for the agricultural identity of native Latvians when I visited their Ethnographic Open Air Museum - a large collection of peasant dwellings, churches, and public structures from 17th- to early 20th-centuries. This agrarian identity may still be found in a national cuisine that harkens to farm food: potatoes, grey peas, and blood sausage. In Riga, I found several small restaurants that specialize in this Latvian cuisine. I also visited museums housing national artworks from the 16th- to 20th- centuries, and an exhibit of modern paintings and installations. Several medieval churches also lie within the borders of the Old Town, and I visited each, noting their collections of towers, rooster weather vanes (a peculiar tradition in Riga), tombstones, graves (including an immuring site), ruins, and organs.

In terms of specific musical elements, I attended two performances of Ešenvalds’ new opera The Immured at the Latvian National Opera, the most significant venue for musical performance in the city. I also visited rehearsals of the youth choir ‘Kamērs…’ (the #2 nationally-rated choir in the ‘amateur’ category) and the State Choir Latvia. Thanks to some helpful connections in the city, I also met with Guntars Pranis, the director of music at the Riga Cathedral, and a professor at the Jāzeps Vītols Latvian Academy of Music. We discussed the Latvian musical education system, folk song and instruments, and his (particularly Latvian) approach to combining folk elements in the performance of liturgical plainchant. Thanks to Guntars’ recommendation, I also attended an ethnomusicology final for students who had worked with the Kokle - the traditional Latvian string instrument in the zither family. Finally, I enjoyed a substantial amount of time with Ēriks Ešenvalds, both watching him work with an American choir (from Drake University) and speaking to him at length about his music.

Taken together, my research confirmed that Ešenvalds represents a complex culture in an equally complex repertoire. I found that Latvia’s identity as a crossroads culture brings a number of diverse influences to bear, and these elements join in the Latvian choral ‘sound’ itself. The Latvian choir enjoys high floating soprano voices (a quality learned from Norway), deep basso profundos (from Russia), a Germanic approach to Latin (consonant in ways with German and Anglo Latin), and dark and pure vowels (consonant with Swedish and Russian singing), all combined with a distinctively Latvian love for melody. Ešenvalds writes his compositions, largely, for this kind of choral sound. When I watched him work with American students, I immediately realized that American choirs will tend to mis-interpret his music, simply because they don’t know this ‘Latvian sound’ which the composer has in mind, nor the collective consciousness that produces it. Ešenvalds also writes with a diversity of techniques, materials, and texts which is consistent with a certain Latvian ‘ecumenicism’ and eclecticism - both functions of its identity as a crossroads culture. The opera was itself a multi-media production, with digital soundscapes, video projections, moving set-work, and a live disk jockey. Ešenvalds does not want to say that he is consciously pursuing a ‘post-modern’ aesthetic in this variety; it is simply natural to his environment. Even the combinations of schola cantorum, professional choir, youth choir, folk singers, bagpipes and Kokle that Pranis described in his own performances should be understood in that context. Far from a uni-dimensional sound or a simple preoccupation with ‘atmospherics,’ his works span a diversity of styles and resources. Finally, my research helped contextualize Ešenvalds’ love for folklore and mythology. Latvian culture is rich with such material, and it enjoys one of the largest folksong collections of any culture — well over a million texts, and some 30,000 melodies. Ešenvalds’ larger scale works sometimes combine ethnographic research from multiple cultures, such as in his multi-media symphony Nordic Lights, or in his recent opera The Immured, which draws upon eastern-European folk traditions of immuring humans in new constructions.

This trip has had significant ramifications on my own research and career. The time I spent in Riga will essentially guide the thesis-writing process over the next year. The kind of context that comes from experiencing a musical culture this strong and vibrant cannot but make my thesis a sympathetic act of scholarship, since I have developed a sense of respect, even admiration, for Latvian choral music. I know that the Latvian qualities of Ešenvalds’ music will play significantly into my attempts to analyze specific techniques, texts, and themes, and it will make my thesis a more complete piece of scholarship for the music community. As I contemplate future plans to develop choral singing in a university setting or to start a professional choir, my experience in Latvia will inform these efforts in important ways. Latvian musicians have a collective approach to music-making which contrasts with American tendencies to individualism. I would love to help nurture that attitude in my students, as well as an excellent choral ‘sound.’ This experience has also given me a vision for a professional choir that could act as an ambassador of American music and culture to the world.  Such an ensemble could serve to help educate Americans in their own culture as well as celebrate it in substantial ways.