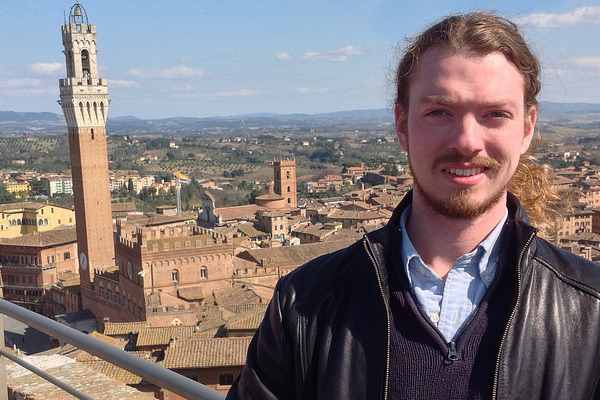 How does conducting research with a Nanovic grant differ from other research experiences? According to Greg Young ('16), a Nanovic grant allows one to find things out for oneself, to experience new information and process new understanding on one's own. As Greg states, this is invaluable. We recently gave Greg, a 4th-year architecture senior, a Senior Travel and Research Grant to conduct research in Siena. Read about the difference that conducting research on his own made to his intellectual and academic development!

A professor said to me recently “the best architects, when they move somewhere new, spend the vast majority of their leisure time learning about that place.” His point wasn’t just for continued education past graduation, when we have jobs, but to learn to know one’s own place, their home, through self-investigation. “There are a lot of firms” he said, “that were really good around New York when they were all in one car, going around the city. Now they’re in a bunch of cars, and they’ve lost something.” During our year in Rome, we were taught a lot by the architecture faculty: we had lectures daily, sometimes inside, more often out in the streets, looking at what we’d only seen through books the years before. We went on field trips: saw different regions, different cultures, etc. But really we were missing the aspect of personal investigation. Because of so many other requirements, people really couldn’t just go spend a day looking at the interior of the Pantheon, to see what was going on. There’s something completely irreplaceable about finding things out for yourself, through your own work that gives a personal connection to the object of study, a sense of place, belonging, and understanding.

Moving toward my fifth and final year (more quickly than I might like!), starting preliminary thesis, work, and preparing for a summer internship and eventually full employment, the need to connect to a place is becoming clearer. As architects we are obliged to create places and spaces that contribute to the surrounding environment, whether that be the rolling hillside of England, or the dense fabric of New York City, a place we live, or the place we’re working. Traveling around Italy with the School of Architecture prepared me for knowing that there are things, cultures, places, that I simply don’t understand. That there’s a richness in life, the surface of which I’ve only scratched. But, it didn’t prepare me to find out that abundance on my own.

Researching in Siena by myself allowed me to better know how to understand a place: without getting to know the people, the culture, the history, the food, the types of trees, and the color of the bricks native to the region, knowing about an important building is all but meaningless. I went to study transitional architecture, between the Gothic and the Renaissance, specifically as it manifested itself in Siena (as opposed to the more well-known Florence), and I did. But I wasn’t prepared for how incomplete my initial thoughts were. I thought I’d be able to really just focus on the buildings and the spaces, and think a little bit about the paintings, sculpture, etc. but as soon as I started reading the history and studying some of the other works, like Pisano’s pulpit in the cathedral, or the museum of the Hospital of Santa Maria della Scala, I knew there was no way I couldn’t spend as much time and energy on things other than architecture. Not because there isn’t enough about the buildings to spend months on, but because it’s such an incomplete picture.

To speak a little about what I found, my initial assumptions were in many ways spot on: the Sienese schools took a different, though in many ways no less important, road than their rivals. The Florentines concentrated on a sense of robustness, a heavy, powerful sense of presence. Perspective, proportions, and many other things were worked out chiefly by Florentines. But while the Sienese may have only dabbled in those things, they far surpassed their neighbors in elegant grace and fineness. The cloak of the Madonna in Duccio’s Maestà has a refinement of line and color that wouldn’t be seen until Leonardo and Botticelli, both Florentines who learned from the Sienese school. These things follow in the interior of the cathedral, one of my particular objects of study: the columns, capitals, statues of the Duomo have a somewhat ethereal quality that makes the cathedral of Florence feel clunky. Furthermore, the idea for a grand domed cathedral in Florence would never have occurred, if not for the influence of Siena and their neighbor Pisa. Happily, the Dome in Siena differs vastly from that of Brunelleschi, and lets us see the work of a sophisticated culture, not the work of a barbarous group, as Vasari might have us believe.

Simply put, my research allowed me a nuanced, personal understanding of a place, which is unique to me: nobody else has my understanding and feeling of Siena, and neither do I have theirs. The time I spent in there not only assisted me in formulating, developing, and working toward my thesis, on architectural composition and symbolic meaning, but has helped me truly understand my professor’s advice. Without the experience of independent research like this, I feel I’d be left with one eye closed. One would be opened, to the world of research already conducted, recorded in books and essays. Now I’ve begun to open the second eye, and I’ve already seen so much with it. I can’t wait for what I’ll see next.