While initial spikes in greenhouse gas emissions and worries of an economic burden resulting from an aggressive renewable energy initiative, energiewende, seemed to put Germany in a precarious state, the nation now leads the pack of industrial powers in a transition from fossil fuel power generation to increasingly capable renewable energy technology. As other countries take a more cautious approach in an inevitable yet daunting energy revolution, mechanical engineering major Flannan Hehir '18 argues that the results from German research and implementation of power storage, electric grid interconnectivity, and core renewable energy technology should encourage other nations be more assertive in the quest for cleaner energy production.

The world is at a point where the need to combat climate change is at the very least recognized, as evidenced by the goals of the Paris Agreement (2015) outlined by the United Nations in addition to individual governments and businesses endorsing environment-preserving practices. The world is also at a critical point where the failure to reduce greenhouse gas emissions in the immediate future could result in irreversible environmental damage that takes the form of the destroyed of ecosystems, extinct species, and a shortened life span for life on Earth. Reforming energy production and infrastructure is the clearly the main avenue for cutting greenhouse gas emissions to sustainable levels, and Germany has taken this task the most seriously among major industrial nations. The country’s energy portfolio has experienced radical change over the past decade, with renewable energy sources accounting for nearly 30% of total power production while nuclear power plants continue to be phased out. German research organizations such as the Fraunhofer Society collaborate with industry, government, and technical universities to produce some of Europe’s largest and most innovative research projects. The German government has been pushing for renewable energy reform since the 1980s with minute opposition from the public: an overwhelming majority of German citizens support the energiewende transition despite increases in electricity prices and construction inconveniences.

After learning about the general background of German energy infrastructure and policy, I became extremely curious about the engineering challenges of such a massive upheaval of power generation and transmission. Germany truly is a pioneer in the field of renewables as no other country of its size has attempted to attain a majority percentage of renewable energy production in such an ambitious fashion. With this forerunner role comes the responsibility to resolve new issues that arise due to the increased reliance on an intermittently producing power supplies (most renewable power supply is variable since solar farms and wind turbines are directly influenced by weather conditions). While the research papers I read did a great job of exploring the details of specific issues, there was still a great deal of uncertainty with a lot of the scientists’ assertions since Germany is currently in a pivotal stage where immediate decisions could lead to myriad outcomes. Thus, I conducted a series of interviews and facility tours across Germany to gain the latest insight on the status of the energiewende mission from the passionate experts leading the way. 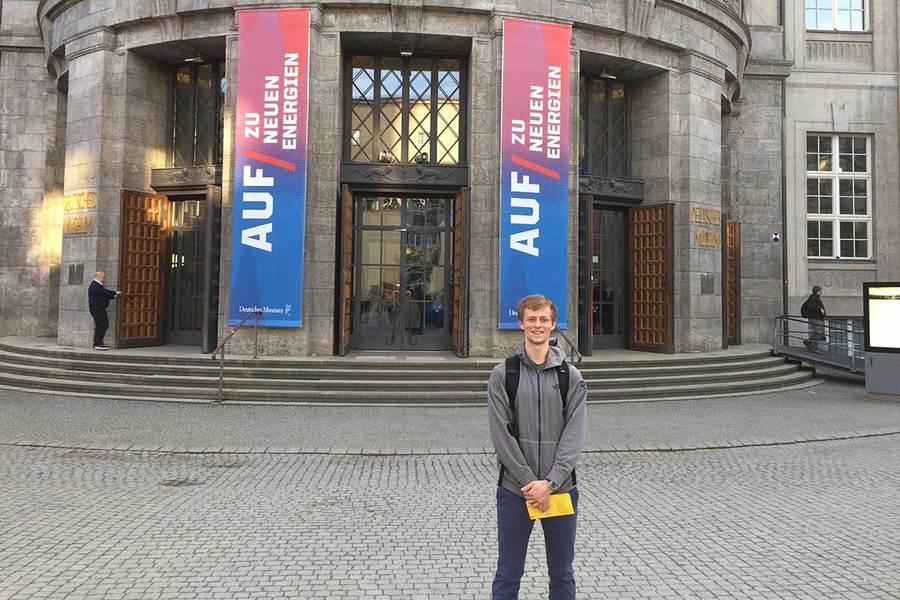 While my research questions were fundamentally related to engineering topics, I was surprised by how much I learned about economic and political facets of Germany’s energy transition. Considering the sequence of steps required to generate electricity and disperse that energy to millions of people, energiewende is an intrinsically interdisciplinary movement. On the technical side, the infrastructure changes required for a renewable energy supply can be divided into three main areas: 1.) long and short term energy storage, 2.) electric grid interconnectivity and communication, and 3.) research and development of renewable technology and implementation. For wind and solar power generation, power storage is essential in supplying electricity to the grid in periods of low wind speeds and no sunlight. Research and development of lithium-ion battery storage centers and membrane fuel cells at Fraunhofer ISE is helping the German power storage industry expand. Internationally, negotiations with Norway has led to the construction of two sea cables to connect German renewable energy production to the large Norwegian capacity for pumped hydroelectric storage. Furthermore, innovative methods for increasing the efficiency of the German electric grid are highly valuable. At research facilities like Fraunhofer IWES, computational power forecasting models are being developed in conjunction with machine learning applications to accurately predict energy generation in realtime, which minimizes the bottlenecking of power loads on the electric grid and the need for having traditional power plants on standby. At the core of the electric grid communication and storage components are renewable energy sources. Solar cell and wind turbine efficiency is increasing at an impressive rate worldwide, thanks in part to the practices being developed in Germany. For example, during my tour of a Fraunhofer IWES North-West facility in Hannover, I learned about the remarkable progress made in the development of structural foundations for off-shore wind turbines.

In addition to the engineering applications of energiewende, I think the economic and regional perspectives are worth mentioning for a more holistic perspective. German government created a system of feed-in tariffs for wind and solar power plant construction that incentivized rapid expansion. One of the major concerns from political opposition was the possibility of renewable energy sources developing rapidly to a point where a hefty economic burden was placed on citizens. Furthermore, many Germans were (and continue to be) wary of the need to update the grid infrastructure to properly support an intermittent power supply. The combination of increased renewable power production and decreased nuclear power production resulted in a carbon dioxide emission increase in 2015 because coal powered plants were relied on to account for grid deficiencies. Consequently, legislation has since transformed the feed-in tariff system to an auction subsidy structure that aims to control the pace of renewables. This new government incentive policy leads into the common discussion of a centralized versus distributed energy sector. The auction subsidy reform favors major utility companies to create large solar and wind farms, but these energy sources are becoming more decentralized in nature. For example, more efficient solar panels offer the potential for home residents to produce self-sustaining energy independent from the grid. Additionally, the new legislation does not necessarily give spatial control to the government; the 16 states within Germany each have their own independent agendas when dealing with their energy portfolio. Thus, the political control of renewable growth is not concrete, and grid infrastructure changes such as longitudinal HVDC transmission lines will likely be determined by the behavior of the German free market. 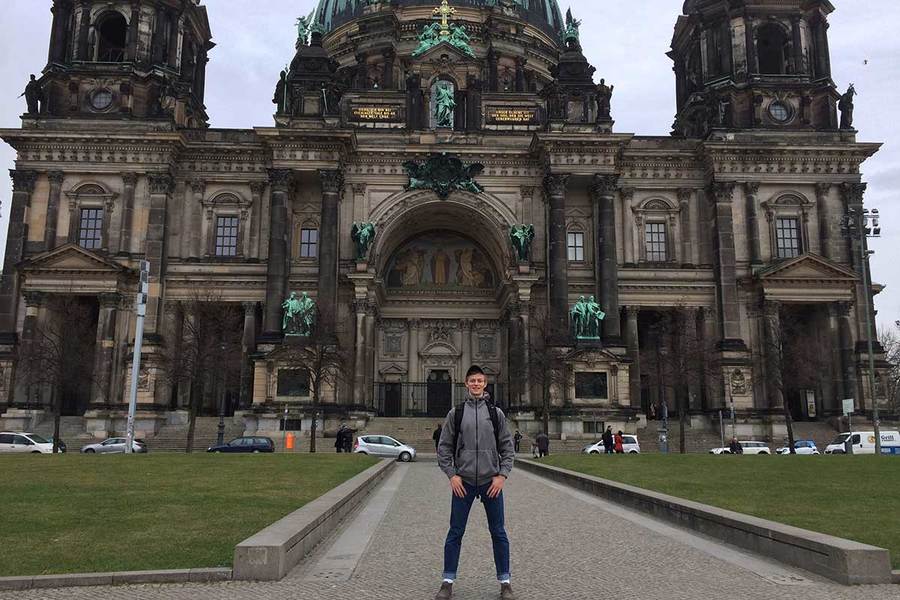 Of course, Germany’s transition to renewable energy will not provide a universal blueprint for other countries like the US and China to convert their energy structures. The phasing out of nuclear power plants in Germany in combination to the discrepancy of resources available to each country means that end result of energiewende cannot be directly applied elsewhere. Still, I believe there are several takeaways from Germany’s movement that other countries can retrieve. The databases being generated by realtime sensors and the improvement of power forecasting and distribution models for variable energy sources could be extremely valuable to countries that are slower to develop renewables. Studies of German off-shore wind turbine installation, a high-cost process, could make future installations more economical. Government and industry collaboration in the sponsoring of national research facilities is also essential to successfully growing the renewable sector. During my time in Germany, multiple citizens I talked to mentioned how important the large network of research facilities across Europe is to developing energy technology while also expanding the renewable industry. Moreover, Germany’s issue of controlling the pace of renewable energy growth while considering the necessary adaptations to the grid framework offers an important topic of discussion for both national and local governments worldwide. Germany is far from being the only country making significant contributions to the renewable energy experiment, but it is the clear leader of the movement where most of its major counterparts have been labeled by economists as free riders. Strong subsidies, energy infrastructure upgrades, and green policy may place a short-term strain on a nation’s economy, but it would be a small price to pay for the ammunition in the fight against climate change.

My experience traveling across Germany to conduct this research was nothing less than amazing. As a university student, it was both refreshing and inspiring to learn about a highly interdisciplinary topic in such unique settings. I will certainly be following the global energy transition closely in this critical phase, and I hope to make meaningful contributions to the renewable movement in the future as an engineer. I must thank the University of Notre Dame, the Nanovic Institute of European Studies, and Professor Tengfei Luo for giving me the support for this incredible opportunity. Seeing and learning about this work in Germany firsthand provided unforgettable memories that will be extremely relevant to my future endeavors.