Sometimes a good research trip is as much about forcing us down a different path as it is about helping us down our current one. This was the case for Elizabeth Baker, a graduate student in History who received a Graduate Travel and Research Grant to conduct dissertation research in England. As she listened to her sources, she was forced to conclude that she needed to change direction. Read all about it in her own words: 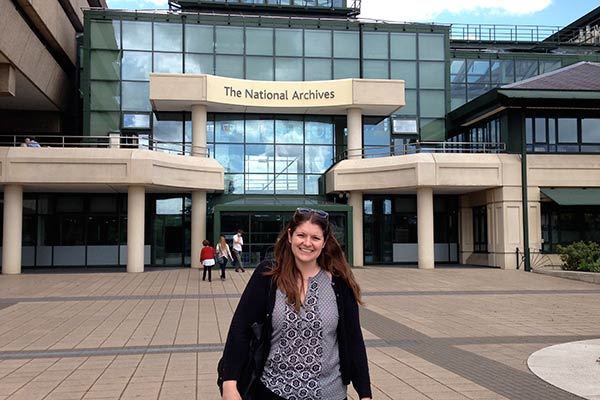 This summer I planned to visit the India Office Archives at the British Library, the Women’s Library at the London School of Economics, and the National Archives at Kew to complete the necessary research to write a dissertation proposal on the topic of Indian women’s involvement with the British campaign for women’s suffrage. Before this summer, I had already spent four weeks in the British Library researching Britain’s leading Indian suffragette, Princess Sophia Duleep Singh. My working thesis argued that her fame, class, and relationships with imperial authorities including the Empress of India herself, Queen Victoria, gave her opportunities within the women’s suffrage movement unavailable to the other Indian women living in Great Britain. With the help of the Nanovic Institute, this summer I planned to broaden my research to middle class Indian women and the ways they interacted with women’s suffrage groups to further my point that class mediated relationships between British and Indian women. However, as I read the sources pertaining to Indian women and their life in Britain it became very clear that most Indian women were not able to leave behind archives like Princess Sophia. Indeed, Indian suffragettes were so marginalized within women’s groups that few mentions of even their names are left behind.

Therefore, within a few days of reaching London, I concluded that I had to listen to the sources and switch the focus of my dissertation. While the archives about the Indian diaspora within Britain did not make much mention of female enfranchisement, they did spend a considerable amount of space discussing the education of Indian women. I spent the rest of my research trip researching the internationalization of the movement to reform Indian women’s education and have already written a condensed version of a dissertation proposal using this summer’s research. Without a research grant from the Nanovic, I would not have been able to realize I could not complete my planned dissertation with the sources available. I would have continued framing my dissertation proposal around a wish list of sources and wasted time on a dissertation that could not have been completed. Now, I have a dissertation topic I am even more excited to research and write about and a realistic set of sources. This summer’s research enabled me to stay on track with my graduation date and gave me a renewed sense of excitement about the upcoming years of dissertation-writing.

Beyond access to archives, visiting Britain offered me other opportunities unavailable in the United States. I met with an Oxford professor to discuss my dissertation, and best of all, I had a chance to explore, instead of just read about, England. On Sundays, the archives closed and I had an opportunity to be a tourist. Many of these excursions were as valuable as a day’s work in the archives. I have previously lived in England for a year and visited on numerous occasions, so I have already visited many of the top tourist sites in the city. Therefore, on this trip I focused on exploring historical places and museums which pertained to nineteenth century Britain. Most memorably, I visited Highgate Cemetery and took a guided tour around one of Victorian Britain’s most exclusive cemeteries. While it may sound morbid, in fact, the tour offered fascinating insights into the ways Victorians mourned their loved ones and conceptualized death. I also visited the Florence Nightingale Museum, Thomas Carlyle’s home, and many others museums, monuments, and parks created by the Victorians.

I also wanted to get a sense of the location of the buildings I read about in the archives, so I trekked to South Kensington to see the Headquarters of the National Indian Association (now a French embassy) and to Aldgate to visit the India House, a hostel for young, radical Indians. (After the hostel’s inhabitants assassinated an India Office bureaucrat in 1909, authorities closed India House.) Although these buildings are not open to the public, it was fascinating to note how the India House was a two-minute walk from Marx’s grave and practically next door to the (then) slums of the East End of London. In contrast, the Indian National Association inhabited a building across the street from two of Victorian Britain’s most prestigious museums: the Victoria and Albert Museum and the Natural History Museum. I read many letters and official statements from the National Indian Association claiming its location helped Indian students acclimate to London and British culture and by taking the London Tube to South Kensington I was able to see why. I had a wonderful summer in Britain. Despite tube strikes, one of the hottest British summers on record, and abruptly changing my research, I benefitted immensely from the trip. I am so thankful for the opportunities provided to me by the Nanovic.