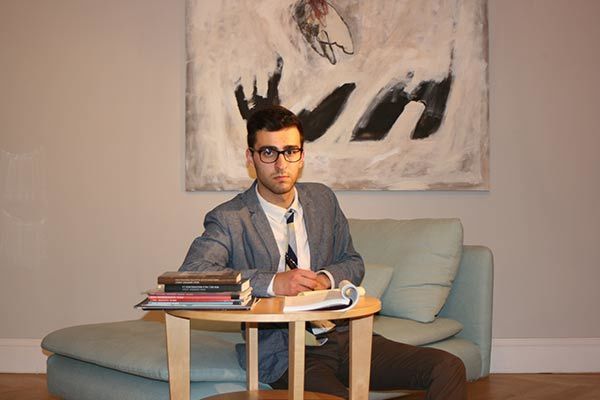 Daniel Barabasi ('17) received a Break Travel and Research Grant for Sophomores and Juniors for his research in Transylvania, Romania.  Daniel is currently an honors student working on a degree in neuroscience and behavior in the College of Science.  What does neuroscience and behavior have to do with Europe?  Quite a bit.  It involves the study of human behavior and how it can be applied to other fields such as medicine, law, or education.  Daniel, who reviewed literature on poverty and development, also interviewed leaders and government entities working on child welfare and child protection services.  We hope to see more College of Science students take this kind of initiative!  Read on to learn about his experience:

My initial contact at the Sapientia University of Miercurea Ciuc, Dean István Kósa, referred me to the leading village policy researcher and professor at the institution, Andrea Sólyom. Dr. Sólyom took it upon herself to not only guide my search for literature on poverty and development in Transylvania, she also arranged meeting with the leading organizations and government entities in the area.

Though I had specified early on that I was interested in the broader picture, my previous experience with the Dévai Szent Ferenc Alapítvány led Dr. Sólyom to focus the meetings on child protection and development services, which turned out to be very rewarding in hindsight. Due to this slight miscommunication, the research I was able to accomplish spread itself into two parts: first, actual literature in the first leg of the trip, which was sent to me by Dr. Sólyom as background information and second, interviews with various members of the aforementioned organizations.

I was provided with various articles, both scholarly and general audience, on the topics of child protection services and employment, as well as various surveys on the issues deemed to be important for families living in the region. Strong progress had been made in these areas after Romania joined the European Union in 2007, however this bolstering effect seems to have declined since 2012, when the last of the optimistic general audience articles that I examined was written. In the past years, Harghita County, the capital of which is Miercurea Ciuc, has seen declining wages, despite rising costs of living. Nevertheless, the surveys show more families concerned with the future of the “Szekler Land” and the Transylvanian Hungarians than the economic stability of the country. Nevertheless, in a question focused on family life, it becomes clear that the greatest concern seems to be for the welfare of one’s children, with the income of the family coming second.

In the interview portion of my research, I was continually reminded of the regional interest in the upbringing of progeny. My first meeting was with Zoltan Elekes, who was the head of the county branch for child protection, and gave deep insight in the development of current systems set in place. Coming out of the Soviet Union, Romania had large governmental orphanages with anywhere from tens to hundreds of children at a time. When Romania petitioned to join the European Union, among many other accommodations, it had to update its child protection services. The teeming homes were dismantled, being replaced by “adoptive families,” who took in one or a few children at a time to their own homes in exchange for modest stipends and payment. This was especially important for children under the age of three, who could legally not be in larger homes, where a guardian would be responsible full-time for eight to ten orphans. Recent efforts have been focused on making the adoption process more fluid and offering stronger incentives for guardians.

Zoltan Elekes and Dr. Sólyom also connected me with representatives from two NGOs involved with child protection in the area. The first, The Csibész Foundation, provides an alumni network for adults leaving the governmental child protection services. Houses run by The Csibész Foundation develop the independence and work ethic of these adults, giving them marketable skills and job opportunities, if possible. The Dévai Szent Ferenc Foundation, mentioned previously, works with underprivileged children, providing them with food, shelter, and a community focused on their wellbeing and education. Parents and guardians still have custody over their children, and most children are returned to them during breaks from school. One of the greatest struggles for this foundation is accrediting their homes, as Romania recently erased the dated standards of accreditation, but never when through the trouble of establishing new ones.

The interviews, with the background of literature I was provided with, provided me a clearer understanding of the ongoing poverty levels and frustrations in a supposedly developed country. Hearing about the hurdles present for both government-run and civil organizations in developing futures for underprivileged and orphaned children has pushed me to shed light on the inefficiency of the Romanian government in addressing these measures, while at the same time developing measures by which Notre Dame students or Americans in general can volunteer or assist in the progress that Transylvania needs. The Nanovic Institute for European Studies has provided me with a strong framework for following through with the promises I have made to myself and the individuals and groups I met while abroad, and I hope to work side-by-side with the Institute in addressing the issues I encountered throughout the course of this project.