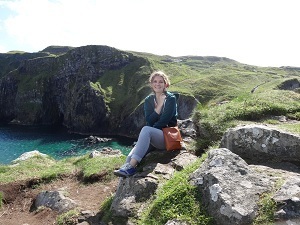 Dana Townsend, a graduate student in Peace Studies and Psychology, is new to the Student Spotlight today! Dana received a Graduate Travel and Research Grant to travel to Ireland last summer to conduct research on the impact of political violence on youth development in Ireland. Not only did her summer advance her research, it provided her with the experience needed for contextualizing her research. Dana recently wrote to us about her summer:

With funding support from the Nanovic Institute for European Studies, I was granted the opportunity to spend July 2015 as a Visiting Researcher at Queen’s University Belfast in Northern Ireland. During this time, I worked alongside psychologists in the Centre for Identity and Intergroup Relations researching the impact of political violence on youth development. Although “the Troubles” in Northern Ireland officially ended with the peace agreement signed in 1998, violence and tensions between Catholics and Protestants have persisted in the form of sectarian-motivated crime and intergroup hostility. Flags, political murals, and “peace walls” continue to mark the more divisive neighborhoods, while participation in parades and marches during the summer months have kept sectarianism at the surface. In trying to better understand the ongoing conflict and peace process, I have been working with a research team to assess the ways that youth behavior and psychological functioning continue to be affected by these intergroup divisions.

Within this area of research, I have tried to incorporate questions that move beyond negative outcomes of political violence (e.g., trauma, depression, anxiety) to understand the processes that lead to positive youth engagement. During my month in Belfast, I collaborated with faculty on four separate projects related to these research goals. First, I completed a manuscript that used systematic newspaper coding as a measurement of the macrosystem in post-accord Northern Ireland and submitted it to Peace and Conflict: The Journal of Peace Psychology. Second, Professor Laura Taylor and I co-authored a manuscript on the relation between youth civic engagement and family cohesion in Belfast and submitted it to Political Psychology. Our findings suggested that in the face of protracted conflict, family support and togetherness may lead youth toward higher levels of political and social engagement. Third, Professor Taylor mentored me on the statistical analyses necessary to run preliminary analyses for my Master’s thesis, which explores family cohesion and peer support as potential “buffers” against the negative effects of political violence. This statistical guidance gave me the boost needed to make progress toward my thesis defense. Lastly, I collaborated with other students at Queen’s University to pilot a research project on the way that moral agency is conceptualized among Belfast youth and differentially applied in intergroup situations. This project is a first step in understanding the gap between internal value orientations (i.e., moral judgment) and outward prosocial and civic behavior (i.e., moral action) as it applies to a setting of protracted intergroup conflict.

The timing of my visit coincided with a public holiday in Northern Ireland known as The Twelfth (on July 12). This event – organized by the Protestant Orange Order – is one of the largest parades during the summer marching season and celebrates the victory of Protestant King William over Catholic King James II in the Battle of the Boyne. Catholic groups have historically interpreted this Protestant parading and celebration of history as a statement of political supremacy. For this reason, the parade is frequently met with rioting, political quarreling, and sometimes violence. Although I was not present for any of the riots, protests, and bonfires that accompanied the march, I was able to attend the parade and observe the way sectarianism and in-group pride manifests during this holiday. As someone who studies youth and violence, it was particularly insightful for me to see the way Protestant youth participate in the parade. For example, each of the Orange Order districts has their own marching band complete with uniforms, decorative banners, and an array of flutists and drummers. Considering the tendency for protests to gather as the parade moves through north Belfast, I was surprised to see that many of the bands were led by young boys twirling batons and banging on drums. It was also surprising to note the number of adolescent girls walking down the street with Union Jack flags tied around their shoulders and waists. Though the parade itself seemed fairly innocuous on the surface, it was easy to see the way intergroup tensions and provocations rise to the surface during this event.

In addition to providing a space for research and observations of the political sphere, my visit also gave me an immersive experience of modern-day Belfast and a better lens through which to contextualize my research questions. I was able to meet with Northern Irish students and discuss their own experiences and perspectives of life in Belfast while being introduced to some of the local culture and nightlife. These conversations and activities allowed me to see Belfast as it exists outside the news cycle and perpetual narratives of conflict and intergroup discord. During my breaks from the university setting, I was introduced to many of the popular restaurants and pubs in town, as well as the food and craft vendors at St. George’s Market. I strolled through the Botanic Gardens near campus, toured the Ulster Museum, and listened to street music in Victoria Square. It was incredibly valuable to get this glimpse into everyday life in the city and appreciate the positive things it has to offer. During my last few days, I was able to rent a car and drive around the upper coast of the island, visiting Derry/Londonderry, Carrickfergus Castle, the village of Glenarm, Carrick-a-Rede rope bridge, and the basalt columns of Giant’s Causeway. Although I have visited Northern Ireland in the past, this was my first time exploring the sites and scenery outside of Belfast and the natural beauty this region has to offer.

I am incredibly grateful to have received this funding from the Nanovic Institute and feel that my visit to Northern Ireland was productive, insightful, and has positively impacted my development as a scholar-practitioner in psychology and peace studies.