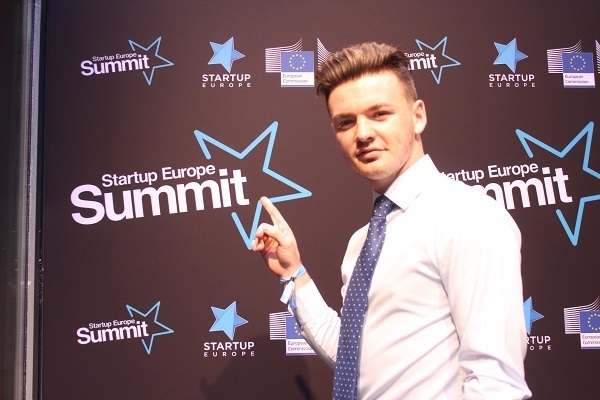 The United States has stolen Europe’s crown for the best entrepreneurial ecosystem. Cornelius McGrath ('17), a double-major in Economics and Psychology, received the Katie Murphy McMahon Grant for Russian and East-Central European Studies to find out how his home continent could win back one of the world's most prized possessions. Cornelius recently wrote to us about his research:

The underlying question of this research project was: how can Europe reignite its entrepreneurial culture? The economy of the most diverse continent in the world has entrepreneurship embedded into its DNA — small and medium-sized enterprises (SMEs) represent 99% of all business in the European Union (EU) and are responsible for 85% of all new jobs created in the last five years (European Commission, 2016).

Yet, the United States (US) is regarded as the place to go if you want to build a successful company. In many ways, it is a deserved title. Year after year, the U.S. continues to produce a multitude of successful entrepreneurs and companies at a rate that Europe could only wish for.  As a European and an entrepreneur — who is building his business in the States — I wanted to explore how my home continent could create an entrepreneurial ecosystem that was capable of competing with America.

Over the course of a month, I visited three ‘bright spots’ of entrepreneurship in Europe — London, Amsterdam and Berlin — and attended some of the continent’s biggest and best entrepreneurship conferences. It was here where I could seek out innovative entrepreneurs who had experienced success on both sides of the Atlantic. These people not only had an innate knowledge of both entrepreneurial ecosystems but also understood what it took to succeed. It was in these conversations that I felt that I could identify some of the key areas Europe needed to focus on to be able to create a stronger entrepreneurial ecosystem that could compete with the world’s best.

I was blessed to be able to hear from, meet, and even interview leading policymakers and entrepreneurs during my time in Europe. It was fantastic to listen to a whole host of perspectives on the challenges that the European ecosystem faced, and yet the same two areas of concern were continually raised.

The first was the problem of retaining top European talent. I sat down with Kees Koolen — former COO of Uber — on the day that he announced his new fund of €556MM with EQT Ventures. Kees started this fund primarily because of the massive brain drain of European talent to the United States.

“We find that great European entrepreneurs begin working on an idea and when they want to scale a company, they cannot find the sufficient capital available in Europe.”

As a result, it becomes an easy decision for European founders to make the move and they end up building their families, wealth and knowledge abroad so they end up staying in the US. While the American money stays in the States, Europe loses some of its top talent. Kees believes that we can stem this brain drain by creating a market sufficient for scale-up capital. This will allow Europe to not only retain its wealth but also ensure that successful entrepreneurs can help mentor the next generation of founders, which will have a significant impact on the ecosystem in 10-20 years time.

The second area of concern has to do with scale. Lisa Witter, a pioneering American female entrepreneur, shared that while she had found it easy to start a company in Europe, it was immensely difficult to scale one.

“The Angel Money is there, but the growth money is not. Part of the problem is that there is too much of a focus on the startups. There needs to be an equal focus on helping people grow their companies and the ecosystem capable of supporting that.”

Boris, Founder of The Next Web Conference, shared similar concerns about the lack of capital in the European market. He said that funding startups, while an important step to building a sustainable ecosystem, is not the most effective thing that the European Union can focus on.

“The difference between Europe and the US is not just that there will be more funding, or that there are more people who are willing to lose money, but also that there are more exits in the US. Investors are not enough; you need exits, and for that, you need an IPO market which Europe does not have.”

It was fascinating to see how these two seemingly distinct issues were in fact so uniquely connected. The top talent will almost always go where the most opportunity (money) lies for their company. This reality creates a dangerous self-fulfilling prophecy: if Europe cannot retain its top talent, it will not build the best companies, so the capital from the biggest exits will not be reinvested into the European ecosystem and there will not be sufficient funds to scale future ventures. Furthermore, the European people and their expertise and knowledge will not be accessible to the next generation of entrepreneurs, killing the 2020 plan dead in the water.

These issues of talent and scale have such a vast and direct impact not only on Europe’s ability to reignite (and sustain) its entrepreneurial culture but also nurture its next generation of entrepreneurs. Therefore, I think it is pretty clear that the European Union should focus their efforts on solving these two issues first if they want to have any chance of moving the entrepreneurial needle forward by 2020.

In short, the summer experience afforded to me by the Nanovic Institute truly changed my life. As a European entrepreneur who is reaping the benefits of America’s entrepreneurial culture, it was unbelievable to be able to explore and experience my own home continent’s ecosystem. It was a steep learning curve, but truly a blessing to be able to connect with and learn from some of the world’s best entrepreneurs around a subject of such global importance. I felt that my truly grassroots experience  researching an issue that is so relevant to my personal journey made this trip even more special and prepared me greatly for my future aspirations to build innovative companies that disrupt economies across the world.