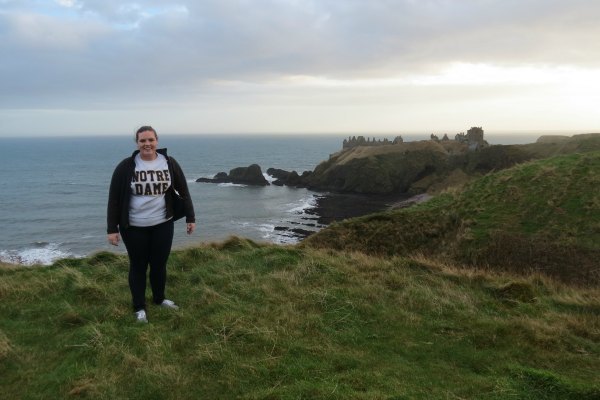 The interplay of enlightenment-guided religious tolerance and Presbyterian fundamentalism came to a head in the violent Scottish anti-Catholic riots in 1779. Colleen Marshall (’16), a double-major in History and Pre-Professional Studies, received a Senior Travel and Research Grant  to travel to Aberdeen and investigate the interplay of political expediency and fundamental religious differences in eighteenth-century Scotland. Colleen recently wrote to us about her experience:

After the defeat of the Jacobite rebellions in 1746, there had been a general trend towards less sectarian conflict between Catholics and Protestants in Britain. While being a practicing Roman Catholic was an illegal offence, punishable by banishment, these Penal Laws were almost entirely unenforced. Due to this trend of greater religious acceptance and the increasing need for soldiers to fight in the American Rebellion, the British government made inroads with the leaders of the underground Catholic community to see if they could strike a deal. They proposed alleviating the most heinous anti-Catholic laws and in return, they would gain regiments made up of the newly-legalized Catholics. My project explores the experience of the Scottish Catholics caught in the crossfire of increasing religious toleration from the Government, and the Presbyterian majority that was instigated to rise in violent protest of these relief measures by inflammatory sermons and pamphlets.

While these riots in Scotland occurred first, they tend to receive less scholarly attention than the similarly-motivated Gordon Riots that broke out in London in 1780. What is written on the Scottish riots seldom brings together both sides of the story. The contemporary expert of this historical event, Robert Kent Donovan, has focused his studies on the political significance of these riots for the Presbyterian Popular party in Scotland. Much of the work representing the Catholic experience is confined to chronological histories, written with very little objective analysis of the context and motivations of the Scots Catholics during this time of upheaval. In order to gain a more complete picture of the riots, it was my goal to work with sources written and published by both sides of the Catholic Relief crisis in Scotland to investigate the interplay of religion, liberty, and civil unrest caused by mass anxiety.

I was able to travel to the Scottish Catholic Archives at the University of Aberdeen over Winter Break to research their collection of manuscripts and published materials that related to the 1778-9 riots. Of particular interest were the letters and writings of Bishop George Hay, who led the Scottish Catholics at the time and was an integral player in the negotiations between the Government and the Catholic community. Bishop Hay became the face of the Scottish Catholics and the riots that occurred in February 1779 led to the burning of his newly-built home and chapel in Edinburgh. His observations as both an actor and a bystander in this story provide illuminating details on how the civil unrest grew against Catholics in a short period of months.

Through my work in the archives, I began to piece together the shift from generally peaceful interactions between Catholics and Protestants to the frenzy that was whipped up against a poor and marginalized religious community once they began the process to be legally recognized. Specifically, it was interesting that much of the published anti-Catholic rhetoric proclaimed a belief in religious liberty, but paradoxically opposed relief because of the perceived civil threat that Catholics posed to the Protestant order. In an era when religious freedom was taken to be an ideal, the very fact that riots occurred to maintain laws that persecuted based on religion speaks to an underlying discontinuity of philosophy in regards to religious liberty. It is the goal of my thesis to examine this phenomenon of wide-spread anxiety leading to this violence, and evaluate how the situation of Scotland in the 1770s facilitated this instance of sectarian conflict. Finally, my project emphasizes the role that Scottish Catholics played in this story, not just as victims of religious violence, but also as independent actors trying to establish a balance between an increasingly lenient government and the Protestant neighbors that called for their heads.

I am deeply indebted to the Nanovic Institute for the opportunity to travel and research a topic that I find so interesting. Besides being able to gain valuable archival research skills, my time in Aberdeen allowed me to further connect with the Scottish Catholic community I had been studying. One of the most significant moments of my entire trip was exploring Aberdeen in the evening to find the first permanent Catholic chapel to exist in the city since the Reformation. After wandering down an alley and walking past it multiple times, I finally spotted the non-descript entrance to a small apartment and chapel that served as the sacred meeting place for the Catholics of Aberdeen during the time of the riots. Through my own difficulty locating the building, I was able to gain a greater understanding of what being part of a persecuted religious group might be like, always knowing that openly practicing your faith could be dangerous. Standing in the tiny chapel, I was struck by the continuity of history. Through this opportunity to study the events that happened in Scotland over 200 years ago, I recognized many of the same characteristics of bigotry in 18th century broadsheets as I see in the media today. Unfortunately, prejudice has not gone away, but hopefully through understanding the mechanism through which prejudice grows, we can avoid violent outbursts like the anti-Catholic riots of 18th century Scotland.