Claire Donovan is a Junior majoring in French and Francophone Studies and minoring in International Development Studies and Peace Studies.  The Nanovic Institute awarded Claire a Break Travel and Research Grant for Sophomores and Juniors to conduct research for her project, "'The French and the other' as examplified by Sarah Baartman."  She traveled to Paris over fall break.  Claire recently wrote about her experience: 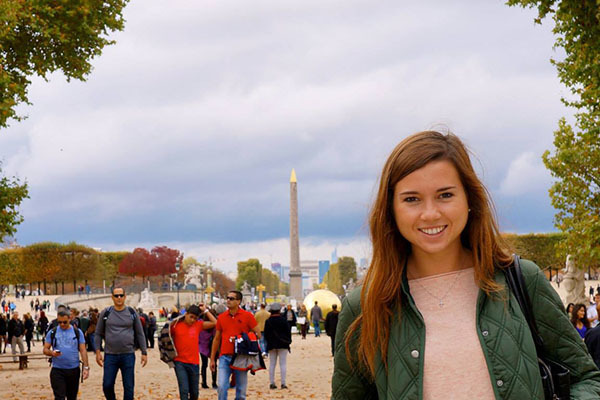 She was born on the Cape of Good Hope in present day South Africa and lived much of her life in London and Paris.  She was shown to enthusiastic crowds and served as an object of both curiosity and desire.  She influenced literature, intrigued artists, and fascinated scientists of her time.  She only lived to the age of 28 and died of pneumonia, syphilis, and alcoholism.  Her name was Saartjie Baartman.  What is the significance of this woman’s story, what is her legacy, and what are the modern-day implications of her life in modern French culture?  This was the goal of my research in Paris this fall break: to study the life and impact of Baartman and to connect it to the modern-day French mentality of “the other.”

To conduct this research, I wanted a well-rounded image of this woman.  I consulted literature, sketches, films, and museums where her remains were on display post-mortem in order to see how this woman was represented and viewed by French in both colonial times and in contemporary times.  My research took me to various locations around Paris including the National Library, the National Museum of Natural History, the Musée d’Orsay, and, surprisingly, to the locations of both her apartment and the building in which she was exhibited during her stay in Paris.  By the end of my week in Paris, I felt almost as if I knew her, after having read so much about her life, followed her path in the streets around her apartment, and even saw the museum in which her remains were exhibited for more than one hundred and fifty years after her death.

Baartman arrived in London with her Dutch master, Hendrick Caezar, in 1810 at the age of 22.  She was displayed at various locations around London, the most illustrious of which was the Piccadilly Circus.  In her act, she played the role of a savage captured from the bush, which Caezar made the crowds to believe was her actual comportment.  Baartman served as an enigma in French society as crowds were simultaneously attracted to and repulsed by the Black Venus.  Her name and image were plastered around London (and eventually Paris) and figurine replications of her body were sold as exhibition souvenirs.  In addition to crowds of captivated spectators, Baartman also captured the attention of many prominent artists and scientists of her day.  Two sketches of Baartman, entitled “Les curieux en extase ou les cordons de souliers” and “La Vénus Hottentote” grossly exaggerate the details of Baartman’s body; her buttocks and nipples, which are the prominent features of both sketches, are drawn completely out of scale and are made to look almost inhuman.[1] [2]  This fascination with her bodily differences was especially visible in the French scientific community’s obsession with Baartman and her place in the development of scientific racism.  Geoffray Saint-Hilaire, a specialist in teratology, the study of congenital abnormalities and abnormal foundations, studied Baartman and concluded that her anatomy was more bestial than human.  Moreover, prominent French naturalist and one of the founders of comparative anatomy, Georges Cuvier, paid to examine Baartman’s body in order to advance his theory that sub-Saharan Africans were the genetic link between apes and civilized Europeans.  He was most interested in Baartman’s genitalia which she refused to show him but which differed in appearance from those of most French women.  As interest in her show waned, Baartman lived out the last of her days in Paris, suffering from poor health and the effects of alcoholism.  When she died in 1816, her last master, the French animal trainer Réaux, sold her body to Cuvier, who studied and dissected her corpse.

Through the literature I studied at the National Library in Paris, I was able to find the address of Baartman’s apartment and the place where she was exhibited while in Paris.  Only a three-minute walk from the Louvre, one of the most treasured centers of culture and art in the western world, Baartman lived in what can be described as a state of free slavery.  Today, there is no sign or plaque paying homage to the woman who walked these streets and was placed in front of malicious audiences.  Even more disappointing was my experience at the Museum of National History.  I felt sickened as I walked through the gallery in which a mold of her naked body, her skeleton, and her preserved genitalia were once on display for visitors for more than one hundred and fifty years.  I watched grandparents with their grandchildren point at and explain the skeletons of orangutans in the same room and I could only imagine past generations of French grandparents instilling a sense of ethnic and genetic superiority in their grandchildren as they pointed to the remains of a woman surrounded by the skeletons of apes.  I was outraged by the fact that in my own lifetime, Sarah’s body was still being exhibited as a colonial trophy and a genetic predecessor to civilized Europeans.  Even in death Baartman was condemned to exhibitionism.

However, It is important to refrain from immediately characterizing Baartman as a victim.  She must, instead, be looked upon as a complicated woman who was sometimes  victimized but who also did, to some extent, have a voice and her own agency.  Although evidence of occasions of her own will as a force in her life is limited, these occasions are important to recognize in order to avoid perpetuating the way in which she was debased and infantilized all her life.  Sarah Baartman lived a complicated life that cannot be fairly judged or categorized by someone living almost two hundred years after her death.  Instead, one can analyze what her life says about nineteenth century French mentality and whether or not traces of this same mentality can be seen today.  Xenophobia is still alive and present in France, as it is in many countries.  However, France is a particular case because it is a country with a long history of a strong national identity as well as a general distaste for anything that threatens this French identity.  Today, xenophobia can be seen in the platform of politician Marine Le Pen of the Front Nationale and the law prohibiting Muslim women wearing the hijab in public places.  This is not to say that all French, or even the majority of French people, are racist and xenophobic.  There were numerous French groups demanding the repatriation of Baartman’s body before it was finally returned to South Africa and there were even people actively protesting Baartman’s exhibition at the time it was happening.  Instead, the point of this research project is to highlight a trend in French history and modern culture.  I came away from this research project wondering if France’s history of xenophobia and implied cultural superiority is just as longstanding as the very culture that some French are trying so hard to protect.