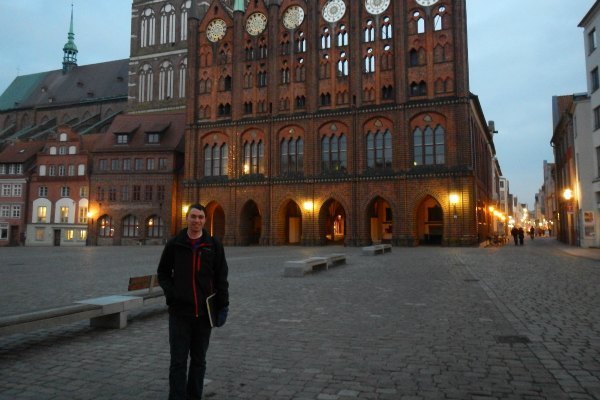 Brick architecture in Northern Germany presents the evolution of Romanesque architecture to the Gothic. This transition includes interesting examples of French Gothic cathedral precedents adapted to the use of brick. Chris Lattimer ('16), an Architecture major, received a Senior Travel and Research Grant to travel to Germany to research this transition. Chris recently wrote to us about his experience:

This Spring Break Nanovic grant study examines the adaptation of the Gothic style to the use of brick in northern Germany, primarily through the study of churches. While studying this, I also was able to see the evolution of Romanesque architecture to the Gothic. This transition period shows the thought process in how the greater heights, attenuated proportions, and thinner massing of the Gothic style were achieved through the use of brick over the course of hundreds of years.

In studying architecture, it is easiest to understand the diversity of Western traditions by categorizing history in a sequential series of styles, but when this is done, one doesn’t experience the true evolution of the history of architecture. This travel opportunity allowed me to see various buildings built in the same “style,” but at different moments in history. I quickly became able to determine which buildings were earlier Gothic buildings and which ones were built later. This distinction allowed me to see an evolution in how the squat round arches of the Romanesque period transitioned into the high pointed arches of the Gothic.

I came to understand the evolution of architecture during this time by analyzing elements of the buildings. The Dom Church in Lubeck is an excellent example of an early Brick Gothic church. The exterior of the church began to show Gothic features with pointed arches in the windows and doors, but the interior still resembled a transitioning architecture. The arches over the nave were rounded, while the ones over the side aisles were pointed. The columns were 12 feet thick, creating a very heavy feeling within the church. The windows were relatively squat in proportion compared to typical Gothic windows. On the other end of the spectrum, St. Marien in Stralsund is an example of a late Gothic church. It was much more closely modeled after a French Cathedral. The structural forces were better understood, allowing the columns and buttresses to be specifically designed according to these forces. The church featured flying buttresses on the exterior, allowing for greater heights without the need to thicken the walls. Greater heights were achieved with much less massing than in the Dom Church in Lubeck. The windows were much taller than in the Dom Church, and even taller than many Gothic churches in France.

It was also interesting to compare the brick Gothic churches of Northern Germany to the French Gothic churches built of stone. The trials and errors of the architects of the brick churches became apparent to me throughout my study. By the end of the Gothic architectural era, the brick Gothic churches were reaching similar heights and using similar proportions as the churches of France. The windows were also reaching similar, if not taller, heights. There were some key differences between the two different movements in architecture. The architects of the brick Gothic churches had to find different ways to express ornamentation. Brick cannot be carved like stone. This created much more plain, but large and imposing, facades on the brick Gothic buildings. Glazed brick and various brick patterns were employed to create variety and express proportions on the façade. Many brick Gothic church facades had a centralized tower, which was less common in French churches. The articulation of the towers varied widely. It was difficult to achieve the level of ornamentation in brick than it was in stone; therefore, French Gothic towers were poor models for Gothic towers built of brick. The interiors of stone Gothic churches in France left the stone exposed. In northern Germany, different techniques were used. Some left the brick exposed, creating a beautiful red glow throughout the building. Others tried to mimic the stone through covering the interior in plaster and painting faux stone and mortar joints. Other architects chose a middle ground, covering most of the interior in plaster, but leaving some brick exposed to highlight key elements, such as the ribs on the vaulting or the column capitals.

Studying architecture during a time of transition holds significance because it helps one understand that the history of architecture is not a rigid series of chronological styles. One style transitioned into another through trial and error over hundreds of years. The common mode of teaching the history of architecture is to discuss the various styles and how they differ from one another. With this background, I was able to understand the differences in the Romanesque and Gothic architecture that I was looking for, but I could see first-hand how the Romanesque transitioned into the Gothic.

Being able to travel and experience these buildings first-hand was instrumental in my understanding of the brick Gothic movement of the southern Baltic coast. Reading about this architectural era would have provided me with the general history of the transition between styles, but by going for myself, I learned how to identify and examine aspects of the buildings on my own. On a single street, I could see hundreds of years of history, which provided for many examples to compare and contrast. From this I could judge how certain problems were solved architecturally throughout history and see the evolution of this thought process through a series of buildings built many years apart from one another. I would like to thank the Nanovic Institute for European Studies for this incredible opportunity to travel and expand my studies outside of the classroom.