Dystroglycanopathy, a lesser known but highly severe and specific type of muscular dystrophy, has affected a large portion of the world population. Cecelia Barry (’18), a Neuroscience & Behavior major, received a European Internship and Service Grant to participate in Arcadia University’s STEM Summer Research Internship Program at The Royal Veterinary College in London. While there, she conducted research that shed light on cerebral effects of the disease in hopes that one day a cure is found. Cecelia recently wrote to us about her experience:

Dystroglycanopathy is an autosomal recessive disease affecting a large portion of the world’s population, especially throughout the United States; however, it does not receive as much attention as it should. Grouped as a specific type of muscular dystrophy, patients with dystroglycanopathy are known to have deteriorating muscles causing problems in mobility, normal functioning, and overall survival in everyday life. In addition to muscular degradation, there is a large range of phenotypic effects within patient’s brains, such as cerebellar cysts. Using cerebellar cysts and disrupted basement membranes as an indication of irregularities in patient’s cerebellums, my research project posed the question: Is angiogenesis (blood vessel formation) affected within the cerebellum?

In order to study angiogenesis, a mouse model for dystroglycanopathy was created that mirrored the phenotype of human patients. The only difference was these mice would not survive after birth due to respiratory failure, a symptom unique to mice with this disease. I conducted two different types of immunohistochemical fluorescent stains to mark for the presence of blood vessels in the cerebellum; both stains marked two different glycoproteins, pan laminin and fibronectin. These are both components in the basement membrane and blood vessel tissue. Fluctuations in the amount of blood vessels in mutant mice compared to the wildtype mice would indicate that improper basement membrane formation did indeed affect angiogenesis. After conducting all of the staining on multiple, different frozen cross-sections of wildtype and mutant mice brains, images of the cerebellum were captured using a fluorescence upright microscope. Images were then analyzed using specialized software to measure the intensity of fluorescence and translate it into a measure of the total area of the glycoprotein stained. Raw data was analyzed and averaged. Statistical analyses were run along with multivariable t-tests. After this, statistically significant increases in fibronectin and decreases in pan laminin were found. This determined that my hypothesis was correct; disrupted basement membranes do indeed affect angiogenesis in the cerebellum.

The results of my experiment are a beginning to an in-depth investigation about the cerebellum of dystroglycanopathy patients. The cerebellum is the center of the most major sensory and motor controls. This being said, complications in this area of the brain can have major effects on the body as a whole. In order to find an answer to this happening, the problem has to be found first. My findings allow others to delve deeper into the idea that angiogenesis is disrupted, much further than I could in a single summer. Significant time and study should be devoted to this concept. Since the brain requires heavy circulation throughout all areas, changes in blood vessel formation can potentially be extremely problematic. Increases in fibronectin show that disruptions could cause a proliferation of branching vessels and decreases in pan laminin show that there could be a diminution of formation. Since both of these deviate from the norm, negative effects could occur.

A concept that could account for the increase in fibronectin involves structures called fibroblasts. These are rapidly generating and differentiating cells that normally reside in the basement membrane. Due the disruptions in this structure, fibroblasts could be dislodged from their normal position, causing them to travel farther into the cerebellum. Staining for fibronectin would also mark fibroblasts and cause an increase in data for this glycoprotein. This concept is a potential avenue for additional research. Now that there is a known difference, more trials need to be completed to guarantee the phenomenon. Once this is completed, investigation for causes and treatments can begin. 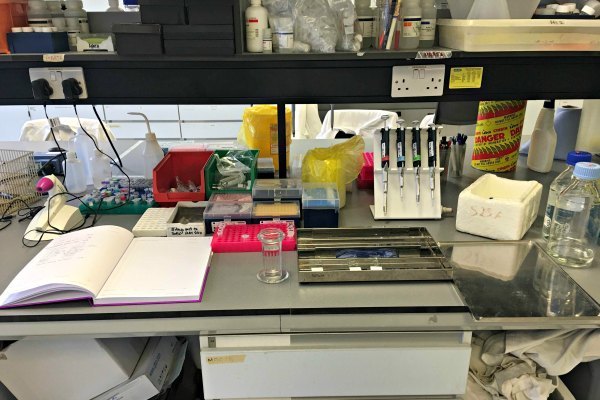 My experience participating in Arcadia University’s STEM Summer Research Internship Program at The Royal Veterinary College in London, United Kingdom has aided in my determination of my career path and given me new outlook on the world. Before this summer, I had never travelled outside of the United States, causing me to feel immensely curious. After receiving the European Internship and Service Grant from the Nanovic Institute for European Studies, I knew that this summer was going to be one I would cherish for a multitude of reasons. Before embarking on my journey, I was unsure as to whether I wanted to pursue a life of practicing medicine within the hospital setting or conducting research in a laboratory. Since I had yet to complete undergraduate research, I saw this opportunity as a trial to see if I truly liked working in the laboratory setting. I was placed into a neuromuscular research group based on my major and interests in human physiology and neurology. The team was composed of three full-time researchers, my private investigator, and one other part-time undergraduate who attended The Royal Veterinary College. Every member of the lab worked on a separate project that would be ultimately combined into one paper for publishing. This allowed me to have my own separate experiment that was totally my responsibility. From the first day, I was thrown head first into the experiment process and I would not have had it any other way. Throughout the entirety of the project, my supervisor gave me one-on-one attention and guidance, something that is incredibly rare in most teaching settings. She taught me brand techniques I had never learned before and had me observe various procedures that other researchers were conducting to learn the protocol for different experiments that my project did not specifically need. I was fully integrated into the normally functioning of the lab as if I were not a student, but another scientist doing real, meaningful research. My favorite part of the experience was learning how to take fluorescent images of the mice brains I was staining. I would go into a dark room and expose the slides to different lights in order to make the fluorescence glow. Then using a high tech microscope camera, I was able to examine the different structures of the brain and take images of them. These images were then translated into data that I could analyze for my experiment.

I absolutely loved the process of conducting the experiment and interpreting my findings by myself while always having my supervisor or team to ask for clarification or help. I never felt like I was alone; everyone truly supported me in every way they could, especially when helping me think of reasons why experiments did not go as planned or explaining a higher level biological process that I did not understand. By the end of my program, I had given a presentation, written a paper solely about my experiment and findings, and totally fallen in love with research. Leaving this program, I stood, unwavering, in my love for science and as a result, decided to continue my research experience back on campus at the University of Notre Dame. I am currently thinking of pursuing a PhD in the future.

Aside from the strictly academic benefits I gained from this experience, I learned an exponential amount about the culture in London. I made it a point to go out and expose myself to as much as I could in the short two months that I was there. The first week I arrived, the United Kingdom was voting on whether or not it would remain in the European Union or not. I felt absolutely blessed that I was experiencing, first hand, such a historic moment. I made it a point to speak to locals and understand their viewpoints and emotions about such a significant decision. It was in these moments where I really came to understand the strong feelings of pride Londoners have about their country and city. I never left a conversation without feeling incredibly enlightened.

I feel blessed that I was given the opportunity to experience what it is like to live and work abroad. I have grown so much after this summer and have gained a deeper, more realistic understanding of the world. None of this would have been possible without the help of the Nanovic Institute of European Studies at the University of Notre Dame, Arcadia University, and The Royal Veterinary College. Words cannot adequately describe my gratitude.