Every year, as the staff of the Nanovic Institute and a selection of our faculty fellows review our Summer Travel and Research Grant applications, we choose one student to receive a special award: The R. Stephen and Ruth Barrett Family Grant for Best Undergraduate Research Proposal. Last year's recipient of this award was Caitlin O'Connor ('16), a History major with minors in Business Economics and European Studies. She used her award to conduct research for her senior thesis, tentatively titled, "Traditions, Innovation, and Critique: Visual Representation of the First World War in Britain." Caitlin recently wrote to us about her experience:

They say “a picture is worth a thousand words.” But when studying photographic theory, this phrase has significant limitations. For if one does not understand the context in which an image was captured, a photograph can reveal very little. This type of context was exactly what I was in search of during my three-week stay in London this summer. Thanks to the generous R. Stephen and Ruth Barrett Family Grant from the Nanovic Institute I was able immerse myself in archival research for my senior history thesis, now tentatively titled, “Traditions, Innovation, and Critique:  Visual Representation of the First World War in Britain.”  In my thesis, I am exploring the ways in photographs and other visual representations of the Great War, like painting, have worked together to form the cultural memory of the war in Britain that exists today.  During my time in London, I conducted research in the archives of the Imperial War Museum, the British Library, and the National archives. I was able to look at both original pictures and bureaucratic government materials that gave insight to why and how the images were taken. Thanks to my time in the archives, I have also come to realize the value of viewing images in their original medium. It allows a researcher to construct a more cohesive and complete narrative rather than a narrative dictated by limited online database search terms. 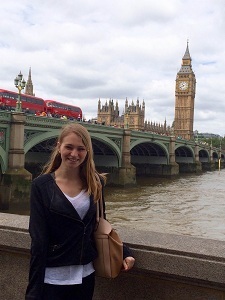 What is particularly interesting about this moment in history is that, despite photography’s increasing role in newspaper reporting and government propaganda, camera technology was still in its infancy. This resulted in most photographic images being carefully staged and composed. By looking at government documents that detailed their intentions for war photographs, I came to a greater understanding of how the British government wanted their citizens to perceive the conflict. While officially commissioned war paintings explored the more gruesome aspects of fighting, the photographic record was primarily filled with images of smiling soldiers marching staunchly into battle. Because art seems to have focused on the dark aspects of the fighting, it seems that these images would have worked to rouse moral indignation and condemn the atrocities of the conflict. Photography, in focusing on scenes that reassured the nation, would have served a mourning population and provided reassurance about the conditions of the soldiers. Together, the mediums contributed to a process of memorialization that worked to condemn the assured, careless way that Britain entered into the war the conflict while honoring those that served and sacrificed for their country. 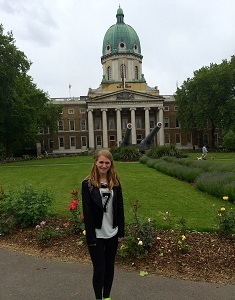 This trip allowed me to experience, for the first time, both the unexpected little joys and the inevitable frustrations that accompany archival research. There were , of course, exasperating days when archival staff could not find materials that I had specific references to. But these days were soon forgotten when I stumbled upon a revealing letter to the head of the Photographic Bureau or a photograph of British citizens excitedly peering at a street-side photo gallery which displayed images of the War. But perhaps the most important piece of information that I gleaned from these archival sources was the confusion in which the Photographic Bureau operated. Prior to conducting my research, I expected that the government records would detail a very clear, orderly process for the taking of war photographs and their subsequent display. I instead found a jumble of correspondences by the heads of the various government war offices, each unsure of exactly what their role was with regards to these government photographs. At first I was disappointed by this chaos; I had expected to find documents that revealed a clearer and more direct narrative of how the British government wished to utilize photography during the war. However, as I continue my research, I realized that this confusion is interesting in itself. The fact that officials from the press, from military intelligence, and from the bureau which oversaw the creation of war art were all discussing the role of photographic material speaks to the way in which the medium serves both as historical artifact and as objects that facilitate remembrance.

I am so grateful this opportunity to pursue independent research and for the support of the Nanovic. This trip not only allowed me to gather sources for my senior thesis, but it gave me great insight to discipline of history itself.  The chance to explore famous archives taught me so much about how historians must piece together fragments of the past to form a complete story and argument. My time in London also allowed me to explore the ways in which my thesis topic pervades the atmosphere of the city today. Seeing the numerous statues and exhibits throughout the city that connected to my thesis so directly was an exciting way to immerse myself in the culture, and it helped me to understand the resonance and current importance of my historical research questions during these centennial years of World War I. I could not have come to this realization if I had stayed in South Bend

Thank you, Nanovic for such a wonderful learning experience! My trip has given me the confidence to undertake my senior thesis and to continue to pursue my interests in Europe after graduation.