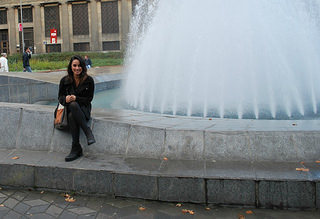 How many students can say that they traveled to Serbia over their break? Brenna Gautam can! Brenna is a Senior majoring in History and Peace Studies. We awarded her a Senior Travel and Research Grant to conduct independent research on the Belgrade student protest of 1968. Here is what she has to say about her experience.

Yet for all these preconceived hypotheses and preparatory actions, the results of my research in Belgrade still surprised me.  I left for Belgrade, Serbia in mid-October with very specific research questions in mind; as a first-semester senior, I was steeped in the initial stages of writing a History thesis on questions of identity and the concept of protest in the former Yugoslavia. I suppose that I also left with a specific set of expected answers in mind; I have researched in the Balkans before, and thought I had an understanding of how deeply ingrained ethnic identities in that region are. I had scheduled museum visits, had set up interviews with historians and curators, and felt completely prepared in facing the week of thesis research that the Nanovic Institute had generously funded.

My research brought me first to the Museum of Yugoslav History, where I learned from both the documents exhibited and from the documents that weren’t exhibited. From the documents on display, I gleaned an understanding of Tito’s relationship to Yugoslav youth during the year 1968. I was able to view and analyze photographs of Tito surrounding himself with youth worker action members in the 1960s, display cases of the batons passed during Tito’s 1968 annual Youth Relay, and transcripts of speeches that Tito had delivered to the youth on his birthday. Interviews with a curator and with a museum staff person, however, introduced me to concepts that weren’t reflected in the exhibits: the lessons of missing history.

“Yugo-nostalgia” was a term often used in these interviews to describe the way the museum was organized around the memory of Tito. According to the interviewees, many Serbians are Yugo-nostalgic: they view the period of Tito as one of economic prosperity, relative ethnic peace, and good international standing. When I asked how the student protest of 1968 fit into this narrative, the answers were blunt: they don’t. And that is why, in the entire exhibit featuring youth and Tito, the youth protest against Tito is entirely left out. For more information on the protest, I was directed to the Belgrade City Museum and the University of Belgrade Library.

At the Belgrade City Museum, I found an entirely different set of a documents telling an entirely different narrative. Images from the marches and demonstrations, signs carried by picketers, and examples of street theater tactics employed by the youth were proudly displayed here. If the Museum of Yugoslav History was “Yugo-nostalgic,” then the interviews at the Belgrade City Museum were “Youth-nostalgic.” Historians here spoke lovingly of the students of 1968, of their passion and bravery, of their radical nature and progressive ideals. Many called 1968 a “romantic” year, acknowledging that a sense of global spirit connected and energized the youth in Belgrade. Here, I was able to learn more about the protest itself and was able to draw conclusions about the way in which the protest was situated within the broader context of 1968. Furthermore, I found an unexpected observation in my research: a contrast between the way 1968 protestors are remembered in Serbia today. On one hand, they are viewed as subversives to the ideal figure of Tito, and are cast aside from history (as in the Museum of Yugoslav History). On the other, they are viewed as modern, romantic, and innocent youth and are placed within the history of 1968.

While on my research trip, I also had the opportunity to visit the University of Belgrade Library, where librarians assisted me in locating documents on the 1968 student protest. These memoirs, which have since been translated into English by Milos Damjanovic, have given me a fuller understanding of the events of June 1968 as they were realized from a participant. Mr. Damjanovic, who works at the Institute for Social Sciences in Belgrade, also gave me insight into why the youth of 1968 were the first to participate in globalized protest: he pointed to television and radio as the answer. This was the first generation in the Balkans that had grown up with television and radio, and were thus connected to the world around them.

Overall, I left Belgrade with a host of primary source material (photographs from museum exhibits, personal interview transcripts, and almost half a notebook filled with observations from my museum and library visit). But while these tangible resources will allow me to construct the bulk of my historical thesis, the intangible gains from this trip will color it in personal ways: being able to actually stand in the Studenski Trg square, the square where protestors gathered and were subsequently fired upon by police in 1968, is one example of the experiences that will allow me to write on the 1968 protest with sincerity.