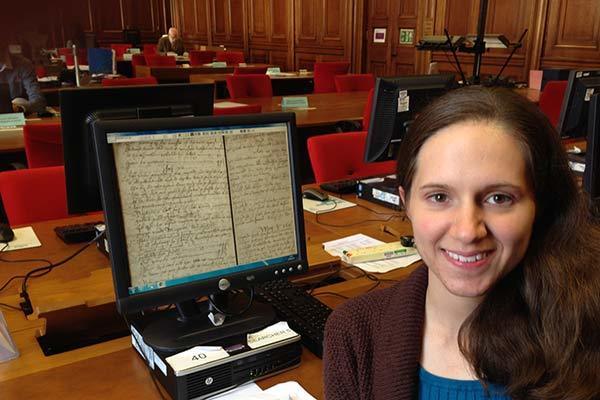 Today our Student Spotlight focuses on a graduate student! Ashley Foster is a doctoral candidate in the department of History. She received a Graduate Travel and Research Grant from the Nanovic Institute to conduct summer research at the National Records Office in Edinburgh, Scotland for use in her dissertation, "Reconsidering the Implications of Scottish Presbyterianism in the Early Modern Period." While the research that she conducted will certainly be useful for her dissertation, it also helped her to define future research paths that will cut to the heart of her research question. Read all about it in her own words!

Through the gracious support of the Nanovic Institute for European Studies, I received the opportunity this summer to spend three weeks at the National Records Office in Edinburgh, Scotland for exploratory dissertation research. From 16 May to 6 June 2015, I perused church records pertaining to the seventeenth- and eighteenth-century Church of Scotland. As this was my first trip to the United Kingdom, the experience was eye-opening and illuminating for it allowed me to connect not only with papers relating to my historical interests, but also places where some of the events, which I study, happened so long ago. To walk where John Knox, Andrew Melville, Archibald Campbell, and John Witherspoon walked was incredibly poignant. While the city scene has changed much since they lived, enough things have remained the same to allow me to imagine, through their eyes, what they possibly felt as they sauntered down the Royal Mile, sat for service at St. Giles, or gazed at Edinburgh Castle. I do not think such occurrences can be brushed off as nice but unimportant to scholarship. I think it essential. For example, after a day of reading kirk sessions from Greyfriars church, I walked past the sandstone building where these kirk sessions took place centuries beforehand. That experience reminded me that the records, which I had just spent hours scrutinizing, were genuine and not figments of imagination divorced from actual time, space, and people. One of the most remarkable surprises, moreover, was the discovery that the 2015 General Assembly (the Church of Scotland’s highest court) was meeting in Edinburgh during the first week I visited the city. They spent their days debating the future of Presbyterianism, and I spent my days exploring the acts and registers of their predecessors.

Even though my research trip was brief, the time spent in the National Records Office greatly shaped the direction of my studies. Because kirk session rolls are only available for examination in designated Scottish archives, I never previously had the opportunity to investigate their contents. These three weeks, consequently, allowed me to acclimate myself to the sources and see what particular elements of Presbyterianism Scots thought were important enough to implement in temporality as well as chronicle for prosperity. One of the most interesting findings pertaining to these kirk records centered on their format as some session rolls were more elaborate than others. For instance, the entire year of 1710 for Yester kirk took up only three and a quarter pages in its book while the Greyfriars’s kirk roll took over eleven pages to record everything just through the thirteenth of March. Further, in Yester’s rolls, most entries document only the sermon preached. Other parishes, such as Beith, note in great detail the disciplinary actions of the session – describing the offenses of congregants, the testimonials of those involved, and the penances sentenced. Most of the sessions throughout the late seventeenth and early eighteenth century seem to reflect this latter characteristic.

That said, I believe this trip taught me that to truly get at the intellectual implications of Scottish Presbyterianism, I need to look beyond kirk session rolls themselves. Although they provide a fascinating glimpse into the daily life of ordinary Scots, many are formatted in a way that hints but does not divulge. If I want to answer what Presbyterianism meant to its adherents and discover why Scots observed this particular theology of Calvinism, I need to look beyond cases involving fornication and irregular marriages (popular themes in most kirk session rolls) and focus on explanatory (not just accusatory) elements. Even though I believe these rolls illustrate the ways in which many Scots submitted themselves to church oversight – an act which implies theological concepts such as what is moral/immoral; what/who absolves sins, it lacks the more nuanced views of one’s religion and his spiritual Weltanschauung that I hoped to uncover. While some of this can be discovered at the presbytery and General Assembly level (especially with ministerial dispute cases), other sources need to augment my research.  If I am interested in the manner in which Presbyterianism influenced a follower’s intellectual, political, and cultural position, I need to delve deeper into the “temporal” side of the confession and look at institutions and papers not strictly labeled as religious. God and faith carried significant amount of influence that permeated relations of various kinds and degrees. Kirk sessions at the local level teach us that people willingly not only submitted themselves to the church’s oversight but also propagated it by often reporting on themselves. Now, I need to analyze specific spiritual and temporal discourse in the sermons, legislation, and actions of Scots who devoted their lives to perpetuating their faith and God.