How does the most glamorous industry prepare for its most glamorous event? Amanda Bartolini (’17), a double-major in Marketing and in Film, Television, & Theatre, received a European Internship and Service Grant to take an inside look at what it takes to run the Cannes Film Festival, a celebration of the world’s best films and the stars that appear in them. Amanda recently wrote to us about her experience:

The film industry is one of the most illustrious yet vastly misunderstood industries, even to students studying it. Even so, as an outsider looking into the industry, I can’t help but feel swept up in the glamour, prestige, and seemingly effortless perfection that simultaneously fosters the industry’s power and makes it feel untouchable. My motive for working at the American Pavilion at the Cannes Film Festival was to learn more about the film industry from a technical and sociological standpoint by placing myself in the midst of its greatest celebration. As a theatre major, I’m interested in the parallels between theatre and film production, but also in learning more about the industry in depth. As a marketing major, I’m interested in how the film industry promotes its brand, both it’s industry-wide promotion as a glamourous hub for art and on the level of individual films and studios. I wanted to explore how the industry sees and presents itself to outsiders, how those inside the industry relate to each other, and how the event propels the industry’s glamour and intrigue.

As an intern in American Pavilion’s Hospitality and Event Management program, I was given behind-the-scenes access to the operations of the Pavilion. When I first arrived, three days before the Festival began, the Pavilion was still being built. It was fascinating to see how many people were involved in the pre-Festival process and their involvement in the industry. There were construction crews that didn’t seem to care about the prestige of the film festival, and then those organizing the catering, guest relations, and media support for the Pavilion who were already fully engaged in the glamorous upkeep of the industry. During this set-up time, there was a feeling created that something important was about to begin, and we were all necessary to help create that world for our soon-to-arrive guests. I love watching an event come together, especially as a stage manager for theatre, because it allows for an appreciation of all the hard-work, planning, and strategy that must go into an event that those attending cannot even fathom taking place just days before. When the Festival began, I worked with other students and professionals to organize the various panel discussions that the Pavilion held, including talks with famous directors, actors, and producers. There was the same air created, the feeling that we were preparing for something greater than ourselves, but that these preparations had to be hidden from the view of our guests. I enjoyed gaining the “power” of an insider to the production process, and I could see that other interns were feeling the same way. Even if we were just escorting a celebrity’s publicist into our green room or setting up a producer’s name card on the panelist table – not even direct connections to the most famous members of the industry – we were excited to be a part of the process, to debunk the mystical world of the film industry and its major players. It was interesting to see how both the student interns, newcomers to this prestigious film world, and those who have worked the Festival for decades responded to celebrities. Those who had been in the industry for a while were able to conceal their excitement better than the interns did, but everyone seemed keen on making sure their job aligned with being in proximity to the celebrities. It was eye-opening to see how those in charge of promoting the air of perfection and magnificence surrounding the film industry reacted just as outsiders do when coming in contact with the “royalty,” despite their active participation in creating the show of grandeur. Regardless of one’s relation to film industry, there is a clear hierarchy existing within the film industry itself, and the sense that some of its grandest celebrations are created by themselves, for themselves. Despite being involved in the film industry in my role as an intern, I was still acting and participating very much like a fan, a dual-identity that I believe helps fosters the image of the film industry. 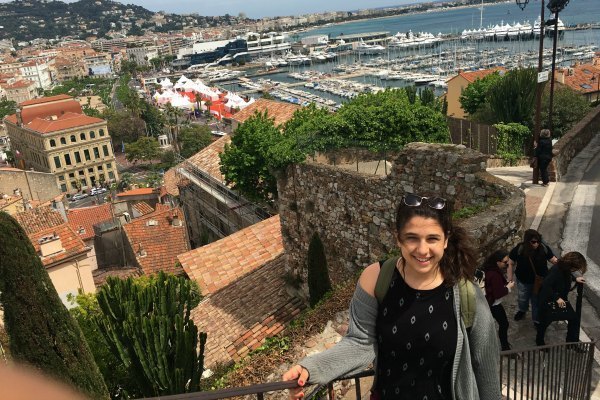 While my experiences at Cannes taught me about the sociological and cultural impact of celebrity and film industry culture, I also gained an immense amount of technical knowledge about the industry. I was able to meet students and recent graduates who were attempting to break into the industry and learn from their trials and errors. It was fascinating to see the job placements of some students, as it helped me learn what kind of outside industries were there to support the film industry. There were trade journals covering the events for special print and digital coverage, studios promoting their newest films, and smaller producers and filmmakers looking to network for future productions. I enjoyed meeting smaller players in the industry and learning about what networking and film production looks like for them, as it is wildly different from the processes one learns about when studying the conglomerate studios. It was also fascinating to learn from those involved in running the Pavilion, as their lives are built around jumping from festival to festival. I was able to talk to some of them about their career journey and the importance of networking in careers that are not as linear or stable as a traditional business job. My experience at Cannes also opened my eyes to the industries that help support the film industry. I was working with not only film students, but also students who were studying hospitality and event management as a profession. I gained so much knowledge in what these students were learning at their schools, gaining a new appreciation for the work that goes into planning events while also learning about job opportunities that could tie my experience as a theatrical stage manager to the film industry.

My internship at the Cannes Film Festival was a non-stop crash course in the world of the film industry and the industries that support it. While my education at Notre Dame has provided me with theoretical knowledge of the film industry and its complex hierarchy, being able to experience it first-hand in Cannes allowed me to better connect theory and reality. My experiences helped me see what job opportunities lie within the film industry and opened my eyes to the ways I could work within the industry in indirect ways, whether it be in event management, hospitality, or media relations. Further, I was able to meet professionals and students that not only taught me more about the industry, but also who can now serve as valuable contacts in the field. Thanks to the grant I received from the Nanovic Institute to intern at the Cannes Film Festival, I was able to learn through first-hand experience the realities and intricacies of the film industry, helping to alleviate some of the unknowns that make a career in the industry seem unreachable.