Allison (Alli) Barry ('17), a Political Science major, went into her internship with the United States Mission to the Organization of Security and Cooperation in Europe (OSCE) with a number of definite goals in mind. With the help of The Dr. Charles C. Price Memorial Fund for East-Central European Studies, she achieved her goals, and enjoyed a wonderfully productive and educational summer! Alli recently wrote to us about her impressive experience:

Interning at the United States Mission to the Organization of Security and Cooperation in Europe (OSCE) has allowed me to achieve my goal of understanding how the United States utilizes its membership in an international institution.  The OSCE ensures the safety of the American people and advances the nation’s interests by facilitating global security and protecting human rights. The U.S. uses the OSCE as a tool for advancing policy that leads other member states to counter Russian aggression, the threat of violent extremism, terrorism and foreign fighters, cyber-attacks, transnational crime, and human rights violations.  The OSCE is the only organization where the U.S. can have an open dialog with Russia and the countries of central Asia to address security concerns.  Furthermore, the OSCE field missions promote U.S. policies and goals at the bilateral level.  A major strength of the organization is flexibility, as it is less bureaucratic then other international bodies.  The Chairmanship can convene a Permanent Council meeting at any point, in addition to the weekly meetings, to respond quickly to a crisis. 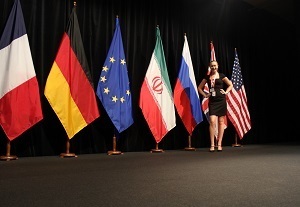 A second goal of mine while in Vienna was to learn how human rights are perceived and protected around the world; working under two specialists in the Human Dimension committee did just that.  I had the privilege of attending the Special Human Dimension Event on Human Rights and Fundamental Freedoms of Internally Displaced Persons, the International Displaced Persons Event on World Refugee Day, and the OSCE Media Freedom Conference on Journalists’ Safety and Conflict Reporting.  The later was the most exciting event I attended all summer.  At one regular side event, a yelling match broke out among Ukrainian and Russian media reporters and the panelists from the Russian Federation delegation.  Anti-Ukrainian propaganda materials were disseminated during the seminar—a representative of the Russian Public Chamber distributed anti-Ukrainian propaganda material without clearly marking them as Russian material separate from OSCE material.  After the journalists protested, OSCE staff removed these materials.

A third goal of my internship was to prepare for the Foreign Service exam and a forth was to learn from the stationed political representatives.  I still have plenty of textbook studying to do, as only 3% of applicants pass all parts of the exam, but at least now I have a concept of what I would be getting myself into.  Almost every day after work, I had a follow up conference, political social, or dinner with an officer from my Mission, the Embassy/ Bilat/ Chancery, the Consulate, the CIA Mission, or the U.S. Mission to International Organizations in Vienna.  Meeting so many successful Foreign Service officers and hearing each of their stories on what drew them into the Service and then where the Service has taken them, has been enlightening.  I feel secure in knowing what the Foreign Service lifestyle entails and what my work would be as a political officer. 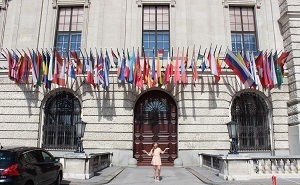 A fifth goal of mine was to embrace the Austrian culture while abroad.  Achieving this goal has made my experience here unforgettable. I would not leave Vienna if I did not have to.  From engaging with interns from other offices, to learning salsa dancing, to practicing yoga, I have met incredible people.  I have built friendships with countryside Austrians, born and raised Viennese, and numerous international visitors.  Vienna is a diverse and progressive city, and it is remarkable to see the culture modernizing yet maintaining certain historical values.  For example, churches host music concerts all night long on certain Saturdays and some museums host happy hour on their rooftops.  Vienna is a lively city and summer has definitely been the best time to experience all there is to do.

My internship has been academically harder than I expected.  My first week here, I was given hundreds of documents to read to understand the latest stance on the Ukraine crisis. Additionally, I read much about torture laws and the U.S.’s interpretation and application.  Once briefed, I immediately attended meetings of the Permanent Council for note taking and then cable drafting.  I researched materials for specialists and prepared statements for the Ambassador to present at conferences (which I also attended).  I would be out of the office and in the Hofburg Imperial Palace approximately three to four days a week.

This internship has been relevant to my political science classes on international relations and world politics.  International Relations taught me the framework of transnational organizations, but now I was able to experience these layers first hand.  The OSCE is the world’s largest regional security-oriented intergovernmental organization.  It promotes long-term security by focusing on not only military and political aspects, but also by respecting human rights and considering economic security.  The OSCE aims to regulate arms control, build democracy, promote human rights, and protect freedom of the media and does so by monitoring elections, preventing conflicts, and addressing economic environmental issues.  The OSCE is classified as a large organization consisting of 550 staff in Secretariat and institutions.

I have been able to apply my knowledge from world politics courses to this internship with special emphasis on elections. Working mostly under the Human Dimension Committee (HDC) representative, I attended numerous meetings hosted by the OSCE's Office for Democratic Institutions and Human Rights (ODIHR).  ODIHR’s primary work is in election monitoring in member States to ensure legal and fair practices as well as the respect of fundamental freedoms.  ODIHR assesses each State’s characteristics of equality, universality, political pluralism, confidence, transparency, and accountability.  After an election, ODIHR continues to monitor the area and review legislation, assess public opinion, support local groups, and follow up on any recommendations from other States. 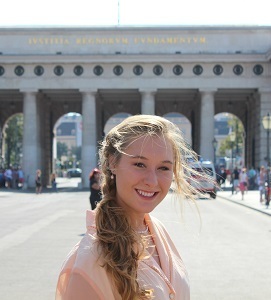 I have improved professionally from this internship by learning how to write for the State Department, adapting a keen note-taking ear, and strengthening my collaboration skills.  The majority of my work centered on attending conferences, talks, and annual meetings to take notes.  At first, my notes were sent to others in the office. Eventually, the political officers showed me how to transform the notes into State Department cables, and even condense the multi-page conference papers into two sentence summaries for Washington.  This process is much harder than it sounds.  Training your ear to hear what Washington wants and then formulating two sentences that blandly yet clearly describe a weeklong event is extremely difficult.  The State Department has a very specific writing style and this internship has provided me with plenty of practice.  In terms of collaboration, I consistently worked alongside the political officers.  For each officer, I worked closely on some project or another over my ten weeks here.  I learned that communication is key, although everything is moving at such a fast pace.  Additionally, I worked often with a post-graduate fellow who worked partly in the office.  We collaborated on many projects, including one comparing the European Union’s Permanent Council Statements with that of the United States to prove to the future German Chairmanship that they are complimentary, not aggressive, statements.

My experience at the United States Mission to the Organization for Security and Cooperation in Europe has been incredible, jaw dropping, and educational.  I have had the privilege and honor to work with some of the brightest political minds, meet the most courageous and respected military generals, and hear conversations that will make the history books (Iran Talks).  I intend to apply to the State Department Internship Program again next year, in a different location.