After seeing her friends’ and family’s reaction to recent violence in France and Ukraine, Alexandra Fedynsky, a senior majoring in Anthropology, French, and Spanish, decided to center her senior art thesis on art specifically created in response to different forms of violence. During Winter Break, she traveled to Paris and Nice to have a first-hand encounter with street art and slogans after the recent terrorist attacks.

"...I wish to thank the Nanovic Institute for this opportunity to return to a country I love, to conduct research on a topic that greatly interests me, and to make connections and learn new things that will benefit me in the future."

While living in both Angers and Paris, France last year, I experienced how a nation responds to a terrorist attack. Most notably, I was drawn to graffiti and street art, what I grew to see as a combination of culture and politics. Having studied this in my anthropology classes here at the University of Notre, I wanted to look more into the implications of this new street art, and what it meant to French people and the international community. Before beginning my concrete thesis project however, I reflected on a similar experience I had in Ukraine in May 2014. I traveled to Kyiv and Lviv, Ukraine, and saw more graffiti and street art in response to violence in Kyiv during the Maidan Revolution. Therefore, after returning from my year abroad, I spoke to Prof. Alison Rice of the Romance Languages Department to discuss writing my thesis on the art, specifically artistic language, which appears after a violent conflict, centering on France and Ukraine.

I hope to take a different perspective on art after violence, although it has been studied before. However, my comparative approach between two countries perhaps not outwardly related provides a new context to approach linguistic art after violence. I have personal connections with both countries, growing up as a Ukrainian-American with close ties to family and friends still in Ukraine and studying French since grade school and frequently traveling to France and living there for one year. These experiences help me to look at the places with both an insider and outsider perspective since I understand the cultures and politics but still have an American upbringing. I also am working to include French and Ukrainian academics in my bibliography, who frequently are not cited in American literature.

Upon arriving in Paris, I immediately began field research. I chose to live on Place de la République, the square where most demonstrations begin, where marches commemorating the victims were held, and where people leave behind notes and signs for victims. Thus I started exploring this area, looking at the newly cleaned statue, seeing protests for Syrian refugees and workers, and various graffiti on the sidewalk and surrounding buildings. Every day something new was happening on the square, so I always had experiences to enrich my research. In visiting some of my favorite museums and monuments in Paris, I also walked around their neighborhoods, to see what reactions to violence I could find in other areas. These walks also included visiting the direct sites of the terrorist attacks, including the Bataclan theatre, Charlie Hebdo, and the restaurants. Here I found many dedications, flowers, and plenty of graffiti, especially since I visited on the two-year anniversary of Charlie Hebdo. My Parisian friends helped me with this as well, showing me graffiti they had noticed or simply telling me some of their experiences after terrorism. Once the Christmas vacation passed for the French, I was able to visit libraries and archives. Here I had to practice my bureaucratic French, while also going through some security (in direct response to the terrorist attacks, and thus useful to my research). I read some interesting primary and secondary sources in various locations around the city, which also influenced what I looked for in the streets.

Between my Parisian endeavors, I traveled to the south of France and explored Nice, the site of a terrorist attack on July 14, 2016. I had less experience with this city, and thus spent as much time as possible exploring many different areas and neighborhoods of the city. I immediately noticed that this city had much less graffiti than Paris, and plan on researching more into this and incorporating it into my research. Focusing on the actual site of the terrorist attacks, La Promenade des Anglais, I walked up and down the wide pedestrian boulevard for any signs of art. Every 50 feet or so was a different etching on the sidewalk, mostly stating messages of peace, courage and inclusion. A bit farther from the beach front, in a park, I found a gazebo entirely dedicated to the victims of July. Many tourists were visiting this spot, reading the messages left and paying respects along with the homages left behind. Various art studios around town also centered on more patriotic and reactionary art. 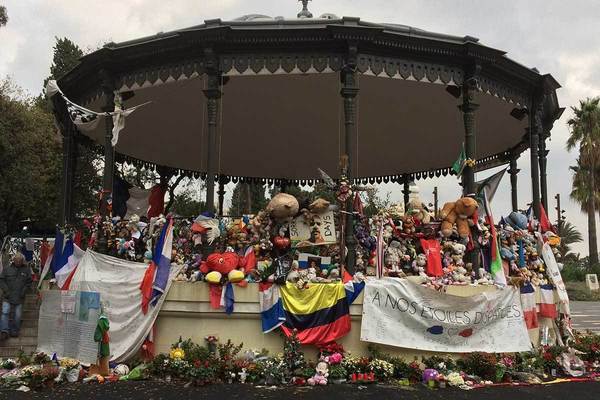 Exploring these cities, homages to victims, and books written about the attacks, truly helped me enrich my research with primary experiences. Because cities constantly change, especially regarding protests and events, my visit allowed me to fully understand and experience what was happening, more so than reading other peoples’ comments and interpretations. I could see the effects of time on the cities, as I lived in Paris last summer (thanks to an internship opportunity with the Nanovic Institute as well!). People’s political opinions, emphasis on post-terrorism literature in stores, and new art trends and slogans were aspects of life that I could study hands on. Also, I will be able to use my own photos and quotes in my paper, especially in conjunction with the data I collected in Ukraine two years ago. Lastly, graffiti is something I could only have fully discovered and appreciated simply by walking around various neighborhoods and areas, as some of the pictures and words were hidden or faded. Thus, my specific hands-on research around the cities of Paris and Nice truly enriched my findings for my thesis.

Beyond the immediate production of my thesis, this trip to France will help me greatly in my future plans and ideas. First of all, because I travelled alone and only had interactions with French friends and citizens, I truly immersed myself in the culture and had to speak French for the month. I saw improvement in my conversation, learned new slang, and had to confidently speak to bureaucratic gatekeepers in archives and libraries. The research itself is something I hope to pursue in the future, namely because it combines my interests in anthropology and French, culture and politics. I hope to go further into academia, specifically researching artistic reactions to violence and how words change, and this project truly can be a catalyst for this project. Lastly, I made new connections and friends in Paris and Nice, with whom I will be able to communicate and work with in the future.