Nothing can prepare a young opera student to learn the art of singing Italian opera like a month-long intensive program training with top European opera coaches in northern Italy. Thanks in part to the generosity of the Nanovic Institute's Undergraduate European Internship and Service Grant, Aileen Markovitz '19, majoring in economics and music with a concentration in vocal performance, trained with the very best throughout July 2016 in Feltre, Italy.

According to the Department of Music, Aileen was awarded the Opera Theater of St. Louis Monsanto Artist-in-Training Advanced Study Scholarship after her internship in Italy.

It is truly remarkable what a celebration of the arts can do for a community. Feltre, a tiny town tucked away in the Italian Dolomites, welcomed an international convoy of singers, pianists, conductors, and teachers to study and perform in their historic theatre from July 1 to July 31, 2016. Modeled off of the famous Venetian opera house La Fenice, Feltre’s Teatro de la Sena perfectly represented Feltre: quaint yet beautiful; historic yet rarely known. Needless to say, the presence of a group of young amateur and professional opera singers in Feltre was met with great excitement; it served as a symbol for progress and signaled a change from the economic austerity that has gripped Europe since the 2008 recession. An assortment of students and faculty from the United States, Spain, Germany, Russia, and Italy made up the program, with the majority of students in their late-twenties and early thirties. A day could include any number of lessons ranging from technique and repertoire coaching, to staging rehearsals and Italian class. Occasionally special guests including world- renowned conductor Maurizio Arena would visit and make us sing better and unlike any way we ever have before.

Maestra Gomez taught me some very important aspects of technique. The most fundamental aspect of healthy singing is the breath, which must begin low in the body and using only the diaphragm for control. As the voice moves higher, the breath must move lower in the body to counter balance tension in the vocal chords. Breathing should be through the nose as often as possible, because incoming air is filtered and purified, whereas breathing through the mouth can dry out the vocal chords and should be used as little as possible. The diaphragm should always remain open and flexible; holding and blocking air as a means of vocal support only creates unnecessary tension in the body and limits vocal agility career. About halfway through the second week of the program, I began to fully understand the correct way to breathe and began to see big changes in the health and sound of my voice. 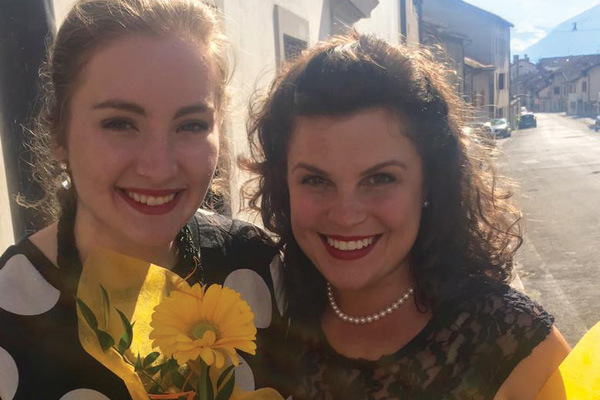 Aileen Markovitz '19 and friend after a performance in Feltre, Italy.

While I learned Italian in my daily trips walking around Feltre and shopping in town, I ended up learning more Spanish than Italian because my lessons were entirely in Spanish or English! The coaching lessons with the American teachers were understandably in English, and because I speak a fair amount of Spanish, the Spanish instructors were much more comfortable speaking to me in Spanish. The few Italian lessons and interactions with Italian instructors I had did teach me the bare bones of the language, so I could understand it fairly well, order food, ask some basic questions, and my knowledge of Spanish helped significantly with the grammar. However, I was still missing huge chunks of vocabulary and only spoke to people if it was absolutely necessary. I found that a “ciao” and “grazie” could get me pretty far! The good news is that my Spanish improved significantly and is another reason I got along very well with the Spanish students and instructors, earning an invite to study in Seville next summer. I learned that the easiest way to learn a language is to speak it, but a challenging barrier is having enough knowledge of the language and the courage to begin speaking. Only then can you truly learn to speak another language and I wish I would have spent more time in Feltre speaking Italian with the locals.

Feltre is truly a special city that recognizes the value of classical music. Much of the support for EPCASO and other cultural events in Feltre comes from the Lion’s Club, a service organization of wealthy people who get together to plan and financially support many events. For the students of EPCASO, members of the Lion’s Club took us on a day trip to Venice, hosted a garden party at a member’s summer villa and took us out for drinks after our concerts. We worked six days a week, but each Sunday the Lion’s Club of Feltre provided small excursions that helped us fully explore and understand Italian culture. At first it was disappointing to not have enough time off to travel to other parts of Italy, but that limitation instead allowed us to explore Feltre and experience what it is like to live in Italy, rather than as a tourist. I was able to take part in the weekly markets, try all the different gelato places, and try all the best foods of Northern Italy. The hotel provided us with a three course dinner every night, with some of the best food I’ve ever tasted. Because Feltre is so far north within Italy, the culture has many Germanic influences. We would often get potatoes or German inspired food for our second course, and many of the people in town spoke German as a second language. Yet the core values of Feltre remain quintessentially Italian. All shops close in the early afternoon, the cars drive very fast, and coffee permeates every aspect of the culture. When it was time to fly home, I needed to take a 6:45 AM taxi to the local train station, and we had a very hard time finding one because it was too early for them! I experience the beauty and warmth of Italian culture every single day that I was in the country, in so many different ways.

Through the EPCASO experience I learned about vocal technique and the opera career, Italian culture and language, and the importance of a community that values the arts. It is often challenging to decide the best path with a cacophony of different voices attempting to show you the way. I had six different instructors each telling me a different approach to technique or a new way to approach an aria, and often times these ideas would conflict with one another. Even this occasionally confusion situation shed light on an important concept of an opera career: it is your voice and at the end of the day you decide what to do with it. If a teacher or technical approach fails to lead to improvement, or a teacher does not seem to be a good fit, leave! Similarly, if an instructor is suggesting repertoire that seems inappropriate, it is the job of the singer to refuse to sing it. Taking control of your voice and your career is so important and became evident through my experience at EPCASO. This experience was so rich in opportunities for growth for me, and I am extremely grateful for the funding that I received from the Nanovic Institute that helped make the whole trip possible. I intend to build upon the technique skills that I learned to further develop my singing ability now that I am back at Notre Dame, and I will always treasure the memories that I have of my five weeks in Feltre!