The Nanovic Institute once again sent a student to Europe to conduct archival research, only to have him find something new! Adam Foley is a doctoral student in the department of history who received a Graduate Travel and Research Grant to go to Rome to conduct research on the task of translating Homer in the Italian Renaissance. While there, he encountered a huge setback: his laptop, which contained much of his research, was stolen. But he also made what he calls a "modest discovery." "I found," he wrote, "an interlinear Latin-Greek translation of part of the Iliad inserted at the end of a large codex of Scholia on the Iliad. This text has been unknown until now." Adam recently wrote to us specifically about his modest discovery:

The humanists of the Italian Renaissance were the first to read Homer in western Europe and to translate his Iliad and Odyssey into Latin since the ancient Romans. The first Latin translation was done at Petrarch's expense around 1358-62 by a Calabrian Greek named Leonzio Pilato. His translation, however, was clunky and overly literal. Homer's famous "winged words" seemed to limp rather than to soar, and it provoked even readers who had no knowledge of Greek to claim an appreciation of Homer's native eloquence. Pilato's versions were as widely read as they were universally excoriated. Immediately following his work something of a collective effort took hold to refurbish the surface of Pilato's unvarnished Latin. It would not be entirely misled to say that subsequent humanists, such as Coluccio Salutati and Antonio Loschi, were eager for a more readable edition of the Iliad on account of Homer's proverbial sublimity as much as Pilato's lack thereof.

In response to Pilato's translations there was a series of attempts to re-translate the Iliad or the Odyssey on various occasions from 1398 to the 1430s. Some of these survive, but most are in a fragmentary state by unknown authors. A few seem to be connected with, perhaps even attributable to, prominent humanists such as Pier Paolo Vergerio, Guarino of Verona, Francesco Filelfo and Carlo Marsuppini. By far the majority of these translation attempts are simply reworkings of Pilato's ad verbum translation. For instance, the famous Milanese humanist Pier Candido Decembrio re-wrote Pilato's translation into more elegant Latin with a more consistently classical vocabulary. He took as his chief semantic unit not the word, as Pilato had done, but the entire line. His work can therefore be called an ad versum translation.

Pilato seemed to dissolve the literary unity of the text into a loose assemblage of words with meanings that could be translated independently of the syntactical relations in which they were embedded. His translation was based on a grammarian's understanding of language, which, though ideal for instructing students, spelled syntactical anarchy. In some cases the supervenient meaning of a clause collapsed altogether into a mere pile of words and the sense of the whole was compromised for the sake of discrete verbal meanings. Decembrio remedied this situation not by translating directly from the Greek text of the Iliad which he had at his disposal, but by simply rearranging the words in each line of Pilato's text. With Decembrio there is thus an expansion from verbum to versus, and, along with this expansion, greater breathing room for the bard to sing.

The period spanning Pilato's ad verbum translation and Decembrio's ad versum re-working of it marks the first stage in the translation of Homer (1358-1440). This phase in translation attempts was characterized by two basic trends that changed over time. First, the primary semantic unit which the translator took as the principle carrier of meaning to be transferred from one language into another was the discrete word. By the end of the first phase of translation the carrier of meaning had been expanded to include not just the word but the entire line. There was thus a transformation in the surface of the text due to the growing awareness that literature cannot be reduced to an assemblage of words but must also include entire lines of poetry.  Second, and parallel with the first expansion, the style of translation during this phase went from being overly literal, rigid and resistant to reading to being less literal, more classicizing in vocabulary and fluid in expression. Decembrio's translation was certainly not ad sententiam, but it did demonstrate considerably more sensitivity to formal properties of epic versification. Decembrio could only have done so on the basis of his belief that the Iliad as a literary unity could not be reduced to a multiplicity of words but must be assembled together out of discrete verses of hexameter. The first phase in the translation of Homer is thus marked by a dramatic widening of the sphere of meaning in the base text and, along with this dilation of meaning, a preference for syntactical over verbal units which at least points to a more sophisticated understanding of the Iliad as a literary whole. 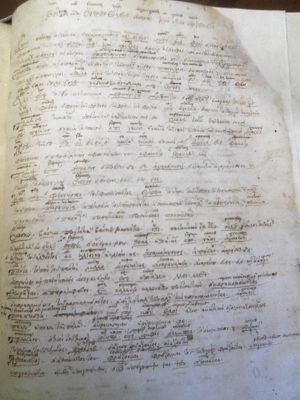 Until now scholars have been aware of eight different translation attempts during the first phase from Pilato to Decembrio noted above. Six of these survive; the other two we know of by references to them in epistolary correspondence. At the Biblioteca Nazionale di Napoli I have discovered a new translation attempt to add to this list. The work occupies about a hundred folio pages inserted at the end of a massive codex of Greek scholia on the Iliad. The foliation is a nightmare, which indicates that it was done in great haste. There is no colophon, and, apart from the handwriting itself, there is no indication of its author, date or provenience.

The work itself is a very rough interlinear translation of book 1 and part of book 2 of the Iliad and almost certainly dates to the first period of translation attempts noted above. The work is so sketchy and provisional that it likely derives from a classroom exercise by a student still learning the rudiments of the language. However, it seems that the student was also interested in producing a more polished translation of the Iliad as the text is divided into two different sections. The first section is a very sketchy interlinear translation with each word parsed in Greek and its Latin equivalent above it. In the second section the grammatical parsing is omitted and it seems as though the student is moving towards a more polished interlinear translation for non-public presentation.

The first section consists of the Greek text of Iliad 2 and part of 1 interspersed with grammatical analysis of each word in Greek and its Latin equivalent above. The Greek text of the Iliad is not only written out, but every word in whatever case it appears in the text is then parsed out as if the student was taking grammatical notes from an instructor. Most words are parsed out only partially only with those forms of its oblique cases which are necessary for understanding the form that is used in the text of Homer. The word as it appears in the text of the Iliad is underlined and then followed by the various forms of the oblique cases. For example, the first word of Iliad 2 is Ἄλλοι, which means "the others" or "the rest" of the gods. Our student writes "Ἄλλοι ὁ ἄλλιος τοῦ ἀλλίου ἡ ὀνομαστίκη τῶν πληθύντων οἱ ἄλλοι" (The others: the other, of the other, the nominative plural: others). The Latin equivalent is then written above the Greek word. In this case "alii" is inscribed above ἄλλοι, which is followed by "quidem autem dei." Not every Greek word receives a Latin equivalent, which reinforces the claim that it is not a translation proper but a student exercise. 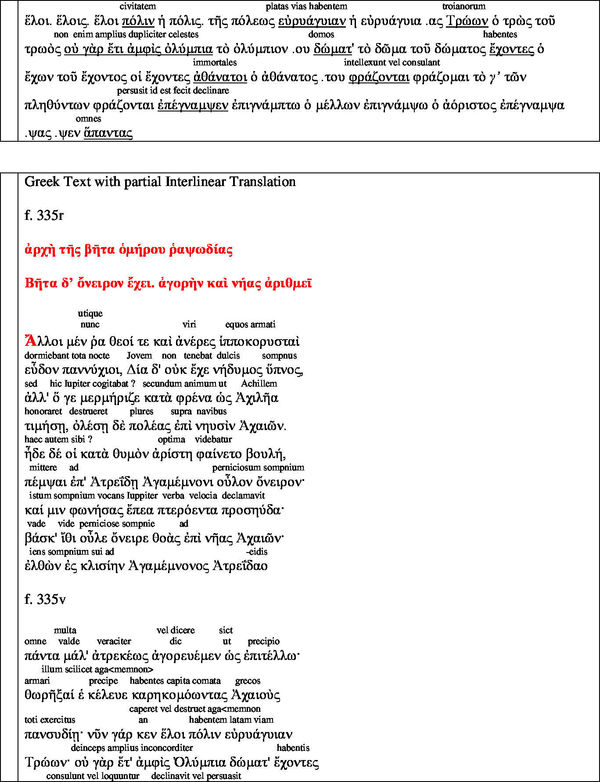 The second section is closer to an interlinear translation proper. The title of the second book along with its argumentum and the initial capital letter are written in red ink, and the handwriting of both the Greek and Latin text is much more neat and easy to read. It therefore gives the impression that the sketchy first section was a grammatical exercise in preparation for the second, more polished section, and that the second section was to be presented to someone, perhaps the pupil's instructor. What is interesting about the second section is that our pupil sometimes includes more than one possible Latin equivalent for a Greek word. For instance, above the word μάλ<α> ("very," "much") he writes "multa"  and "valde" to emphasize that the Greek adverb has both intensive and quantitative meanings. He often piles words on top of each other to save space and leaves it to the reader to decide between alternate meanings as when above ἀγορευέμεν he writes dic vel dicere, "speak or to speak." In this case the ambivalence derives from the fact that the Homeric form of the infinitive ἀγορευέμεν, "to speak" or "address," can also have an imperative sense. The translator preserves the ambiguity by leaving it to the reader to decide. In some cases he gets the word wrong, as when he translates the adverb πανσυδίῃ, "with all haste," as toti exercitus, "of the entire army."

This translation exercise is important for a number of reasons. First, it grants us a glimpse into the process not only of Greek instruction at the time but also of rudimentary Latin translation of an ancient Greek poet. It opens up an entirely new area of inquiry to explore and, quite literally, grants us access to the thought process of a student at the early stages of language acquisition when confronting a difficult text from the earliest period of Greek literature. The text could very well derive from one of the well known humanists cited above, whose "lost" translation attempts have been considered lost until now. However, with such paucity of information in the manuscript itself indicating otherwise, it would be rash to make any assumptions at this point. The second reason this codex is so important, is that it shows us what translation looked like at an intermediate stage between very rudimentary grammatical instruction and translation proper. The text therefore represents a transitional stage not only in the student's Greek training but in the project to translate Homer as a whole. It is an embryo, as it were, and as such has the power to tell us a good deal about the progress of translation in the Renaissance as it developed incrementally from a grammatical fetishizing of discrete words to the literary composition of a new Latin Iliad.