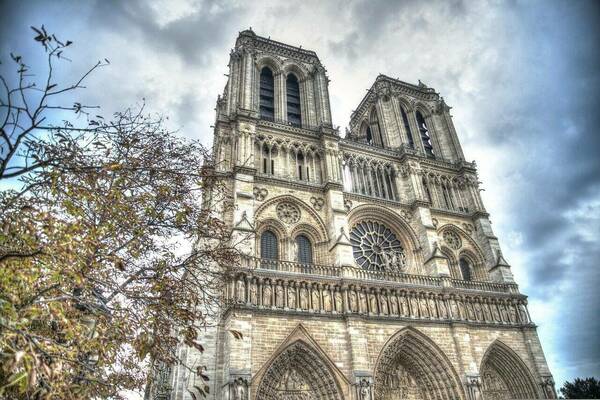 On April 15, 2019, the Nanovic Institute was speechless with horror to see, at the beginning of Holy Week, the cathedral of Notre-Dame de Paris engulfed in flames.

To the pompiers fighting the blaze, to the Archbishop and his parishioners at the cathedral, to all Catholics, especially those in France, and to all people of goodwill who are grieved to see the destruction of one of the world’s finest testimonies to the spiritual dignity of humanity, we offer our solidarity, shared grief, and prayers.

The Nanovic Institute has cultivated a working relationship with the remarkable maîtrise (teaching faculty) of Notre-Dame de Paris. Starting with one of its organistes titulaires, Mr. Olivier Latry, whom the Institute brought to campus in 2014 for a special concert and masterclass, the Institute proceeded to support Notre Dame students who wished to learn also from vocal teachers at the cathedral in Paris. Regarding this budding musical partnership, Mr. Latry once exclaimed, “Notre Dame and Notre-Dame? Of course! It’s natural!”

Shared sorrow exists now in this solidarity because, one April, a hundred and forty years ago, the University of Notre Dame itself burned to the ground. The conflagration started small in the east wing of the University’s Main Building, which housed “essentially the whole campus,” but it spread too rapidly for anyone to control. In a very short time, the University was in ashes. Four days later, the University’s founder and first president, Fr. Edouard Sorin, CSC, returned to see the young campus in ruins.

To his devastated community gathered in the University basilica, Fr. Sorin expressed humor, faith, and resolve: “I came here as a young man and dreamed of building a great university in honor of Our Lady. But I built it too small, and she had to burn it to the ground to make the point. So, tomorrow, as soon as the bricks cool, we will rebuild it, bigger and better than ever.”

The next day, Fr. Sorin rolled up his sleeves and joined his brothers in the task of cleaning up and laying the new bricks. Notre Dame's Main Building, reconstructed in record time, stands to this day.

Nanovic Faculty Fellow Margot Fassler (Sacred Music) gave an interview to the BBC on the significance of the cathedral and its epochal contributions to the development of music and harmony.

Twitter feed of the Pompiers de Paris, the firefighters in Paris, more than four hundred of whom answered the call.

An article on Fr. Jean-Marc Fournier, chaplain of the Pompiers, who entered the interior of the cathedral to save precious items.

The magnificent grand orgue in the back of the nave, which had been restored completely in 1992, has been damaged; its condition is still being assessed.

An excellent thread from a firefighter in St. Louis, Gregg Favre.

A reflection at Ars Technica about digital data and the feasibility of reconstruction.

The President of France, Mr. Emmanuel Macron, resolves to rebuild the cathedral.

The academic architectural research that could be critical for reconstruction.

What was lost and saved during the fire.