From Euromaidan in the east to Brexit in the west, the political landscape of Europe is changing.

One of the more recent movements to capture global attention is that of the gilets jaunes ("yellow vests") in France. Taking their name from the safety vests that all drivers in France are required to keep in their vehicles, the movement was formed initially in response to the Macron government's attempt to curb fossil fuel use by means of increased fuel taxes, which affected those living outside the cities where public transportation is not easily accessible. For over two months, the protests have gathered momentum, broadened in scope, turned violent, and spread throughout France.

In his second visit to the Nanovic Institute, Guillaume Lacroix, the Consul General of France to the Midwest in Chicago, gave remarks and answered questions from over a hundred students and faculty gathered in the Elizabeth Nanovic Seminar Room for the occasion.While the proposition of speaking on behalf of a nation sounds daunting, Monsieur Lacroix spoke candidly and with conviction about the future of France.

He began his remarks by emphasizing the aspects of his role as Consul General: his jurisdiction covers thirteen states in the Midwest and he strives to build partnerships with businesses and organizations that link back to France. He also visits and applauds communities who participate in French culture, especially schools with strong French programs.

After waxing eloquent on the pleasures of being a Consul General, Monsieur Lacroix began to discuss the matter at hand.

Monsieur Lacroix stated that knowing France and its economic limitations could be a pathway for both the French government and the gilets jaunes to find a favorable resolution to both of their problems.  As the gilets jaunes gain popularity with no resolution in sight, however, the sociopolitical implications of their rise remain ambiguous.

The ongoing migration crises of Europe coupled with opposition movements like the gilets jaunes, Monsieur Lacroix expressed that people are afraid of the future now. “Parents are convinced their children will have a more difficult life.” These crises suggest a broad sense of lost control, such as a loss of political identity, a sense of national security, and a national identity. The gilets jaunes’ anonymity is also the manifested mixture of these issues: they are unattached to any political organization, they have no face, and no central leader.

While Monsieur Lacroix acknowledged the causes of concern generated by the gilets jaunes, he also expressed an unwavering optimism about the future of France and its relationship with the European Project.

The gilets jaunes are angry with the French government, but it should also be understood that they are part of a group of the French who believe Europe has not delivered its promises. Monsieur Lacroix stated that the French government, which is convinced of a strong European Union (EU) agenda, believes the EU can be the solution for global issues that spur opposition movements and that it possesses the capacity and gravity to attract countries to its globalist position.

“Despite Brexit, countries remain centered under a common idea,” Monsieur Lacroix said. He explained that current positions on global trade espoused by other countries across the world are not always helpful, and that having a network like the EU opens pathways not possible for one national economy to attain. He also cited that the EU’s high standards for quality of life align with those of France. “There is a strong, logical conviction that Europe is the solution, not the problem. We are a grouping of high standards that we should feed and not kill.”

Members of the Notre Dame community packed into the Elizabeth Nanovic Seminar Room to hear, discuss, and reflect on the state of a nation and walked away with a deeper, nuanced understanding of the French agenda. Monsieur Lacroix spoke on many topics regarding the future of France but kept returning to one truth: there is legitimate concern, but there is hope for resolution. 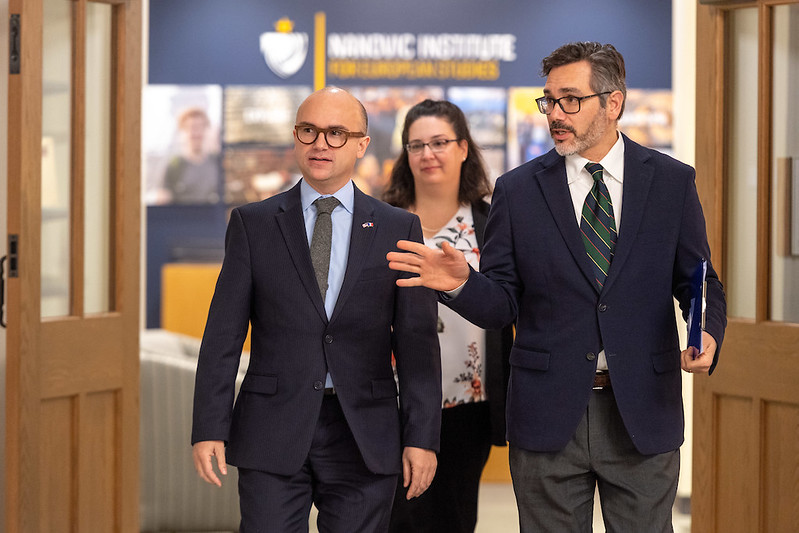