The Nanovic Institute is delighted to report that Maria Rogacheva (Annese Dissertation Fellow, 2010/11) has been awarded the prestigious Robert C. Tucker/Stephen F. Cohen Dissertation Prize in 2014 for “A History of a Town that Did Not Exist: The Soviet Scientific Intelligentsia in the Post-Stalinist Era.” 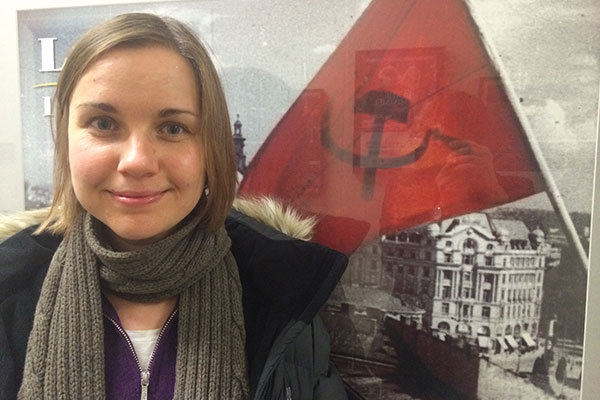 The $5,000 Prize, awarded annually to an outstanding English-language doctoral dissertation in Soviet or Post-Soviety politics and history, is given at the meeting of the Association for Slavic, East European and Eurasian Studies (ASEEES). The purpose of the prize is to enable recipients to turn their dissertations into publishable manuscripts.

Rogacheva’s dissertation, facilitated and completed with Nanovic Institute support, is the first detailed exploration of Chernogolovka, a Soviet scientific community (“naukograd”), and the impact it had on the shaping of its scientists’ worldview.

Chernogolovka was founded in 1956 in order to provide a testing ground for the Institute of Chemical Physics, headed then by Nobel Laureate Nikolay Semyonov. Though the advertised goal of Chernogolovka was to help the Soviet atomic bomb project, Semyonov wanted to create a community where scientists of all disciplines would work together to make advances in new fields such as biochemistry and chemical physics. The project grew. By 1962, Chernogolovka was home to 800 scientists and their families, much larger than the original 25 it was supposed to house.

Rogacheva’s upcoming book will explore the founding of this scientific community, how lives there changed, what everyday life there was like, and how the town shaped these scientists' relationships with the Communist Party, dissenters within the Soviet Union, and the international scientific community.

Rogacheva, who was granted unique access to former scientists, notes that though many historians might expect the intelligentsia to be liberally minded and anti-communist, the scientists she spoke with were decidedly socialist. Their community fostered an insular worldview where the scientists could ignore what they did not like about Soviet society and continue to work for the betterment of the Soviet state. Her new research will cast light on a part of Soviet history that has largely been disregarded in the academic literature.

Rogacheva currently serves as an Adjunct Assistant Professor in the Department of History at the University of Notre Dame.

College of Arts and Letters