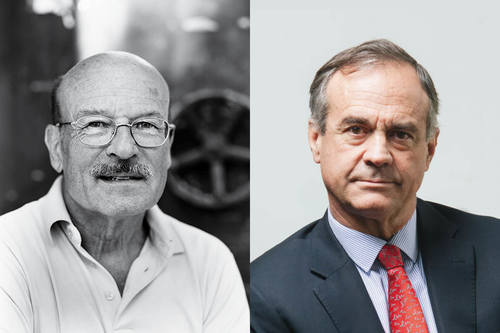 Volker Schlöndorff and Ignacio Walker, two eminent figures from the 1968 era, will deliver public lectures at the upcoming conference at Notre Dame, “1968 in Europe and Latin America,” jointly sponsored by the Nanovic Institute for European Studies and the Kellogg Institute for International Studies.

Both lectures are free and open to all. Tickets to the film are available for free at the Nanovic Institute (1060 Nanovic Hall) and at the DeBartolo Performing Arts Center ticket office (574-631-2800; performingarts.nd.edu).

Volker Schlöndorff is a film director, screen writer, and producer from Germany who has worked on over 30 feature-length movies, documentaries, and short films. He is known for bringing German literary works to the screen and for making "unfilmable" subjects accessible to wider audiences. His film, The Tin Drum, won the highest prize at the 1979 Cannes Film Festival—the Palme d’Or—and then won Best Foreign Language Film at the 1980 Academy Awards. Young Törless, his debut feature film, was released in 1966. In the film, Törless and his friends mercilessly bully another student at their boarding school in pre-war Austria-Hungary. The film is a thought-provoking reflection on power-dynamics, order-following, the depth of human cruelty, and the possibility for redemption.

“We are thrilled that Volker Schlöndorff will be taking part in our 1968 conference,” says Anthony Monta, Associate Director of the Nanovic Institute. “He and a small number of other filmmakers were responsible for a new era of German cinema and took part in broader cultural trends in Europe whose significance, in retrospect, are difficult to overstate."

Ignacio Walker is a prominent politician from the Republic of Chile who has served as senator, Foreign Minister, and president of the Christian Democratic Party. In addition to being an influential politician, Walker is a respected scholar and public intellectual. He is the author of several academic books, including Democracy in Latin America: Between Hope and Despair, published in 2013 by the University of Notre Dame Press as part of the Kellogg Institute’s Book Series on Democracy and Development. He will serve as the Hewlett Fellow for Public Policy at the Kellogg Institute beginning in the fall of 2018.

“Over the last 40 years, Ignacio has been involved in the political fate of democracy in the Americas in each of its stages—through coups and dictatorships to the region’s transition to democracy, and now working through the challenge of social inclusion in the consolidation of democracy. Very few people can bring this perspective to Notre Dame. He is so deeply realistic, without being ideological," says Paolo Carozza, director of the Kellogg Institute. “Ignacio Walker is one of the most thoughtful political leaders and public intellectuals in Latin America today,” adds Steve Reifenberg, Senior Strategic Advisor at the Kellogg Institute. "It is an honor to have him on campus, participating in the 1968 conference.”

1968 was a pivotal year in the history of Europe and Latin America. In each, the year was one of tremendous political unrest, from the Parisian labor strikes, to the beginning of the Prague Spring in Czechoslovakia, to the Tlatelolco massacre in Mexico.  At the same time, the year was one of stunning artistic achievement, from the showing of the Beatles’ Yellow Submarine in the U.K., to the formation of the Plastic People of the Universe underground rock band in Prague, to the opening the New National Gallery of modern art in Berlin. “1968 in Europe and Latin America” celebrates and reflects on the transformative events of that remarkable year.

Schlöndorff’s and Walker’s public lectures will bookend a series of 1968-related events at the conference, including a series of paper workshops where an interdisciplinary group of invited scholars will present and receive feedback on work that addresses themes from 1968. The guiding question of these workshops will be whether the events in 1968 on both sides of the globe can be considered a cultural revolution. Following the conference, the papers that result from the workshops will be prepared for publication as a book collection.

"I commend Jim McAdams and the Nanovic Institute for assembling such an impressive and diverse group of scholars from around the globe to examine the tumultuous events of 1968 in Europe and Latin America," says Stephen Wrinn, director of the University of Notre Dame Press. "I expect that the conference will require scholars from all disciplines to reassess their understanding of this profound turning point in world history."

The conference is organized by a distinguished team of Notre Dame professors, including A. James McAdams, William M. Scholl Professor of International Affairs and Director of the Nanovic Institute; William Donahue, Rev. John J. Cavanaugh, C.S.C., Professor of the Humanities; Carmen-Helena Téllez, Professor of Conducting; and Jaime M. Pensado, Associate Professor of History.

For more information about the conference and Schlöndorff’s and Walker’s lectures, visit 1968festival.nd.edu.