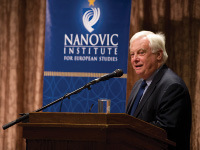 Christopher Patten, Baron Patten of Barnes, CH, PC, will present the Nanovic Forum at 5 p.m. April 19 (Thursday) in Andrews Auditorium of Geddes Hall at the University of Notre Dame. The lecture, titled “Europe, America and the Changing World Order,” is free and open to the public.

Lord Patten is chairman of the BBC Trust, chancellor of the University of Oxford and co-chair of the UK-India Round Table. He was a member of parliament from 1979 to 1992, including chairmanship of the Conservative Party. After leaving Westminster, Lord Patten served as the last British Governor of Hong Kong, overseeing the territory’s return to China in 1997. He also chaired the Independent Commission on Policing for Northern Ireland and became European commissioner for external affairs.

In 2010, Lord Patten was appointed by the prime minister to oversee and manage the preparations for Pope Benedict XVI’s visit to the United Kingdom, the country’s first papal visit in nearly 20 years.

Lord Patten was named a privy counsellor in 1989, a companion of honor in 1998, and a life peer in 2005. He has written a number of best-selling books on international politics. His wife, Lavender, a barrister and family mediator, will accompany him on this visit to Notre Dame.

The Nanovic Institute established the Nanovic Forum through the generosity of Robert and Elizabeth Nanovic, in order to continue to deepen Notre Dame’s rich tradition of connections to Europe by bringing prominent figures to campus who are involved in healing rifts, unifying efforts and enlightening issues that transcend a focus on any one European country, people or constituency.

Past speakers have included Horst Koehler, former president of Germany; and Bernhard Schlink, a German novelist and constitutional court justice.