Thursday, October 4, 2018 -- At the inaugural European event at the Keough School of Global Affairs office in Washington, DC, Ambassador of the European Union to the United States, David O'Sullivan, spoke about the state of relations between the United States and Europe to a capacity crowd.

The remarks were given in conversation with Thomas Wright, Director of the Center on the United States and Europe at the Brookings Institution. Prof. William Collins Donahue, Director of the Nanovic Institute for European Studies, gave the keynote introduction. Prof. Donahue celebrated the occasion as the first of what are expected to be many conversations at Notre Dame's Washington Office about Europe today.

Asked first to comment broadly on the state of US and EU relations, the Ambassador identified two points of contention. First, trade relations between the United States and the EU now have positive "momentum" as the result of a recent deal with the Trump administration. The "big policy divergence" with Washington, he believes, has to do with Iran. According to the Ambassador, the 2015 agreement about Iran's nuclear programs has been a "perfectly functioning and good deal" that established "a draconian regime of surveillance." Now having left this agreement, the United States is, in the Ambassador's view, "at the risk of overreach."

"We have to reinvent the trans-Atlantic relationship in every generation. That's a challenge also for us Europeans." 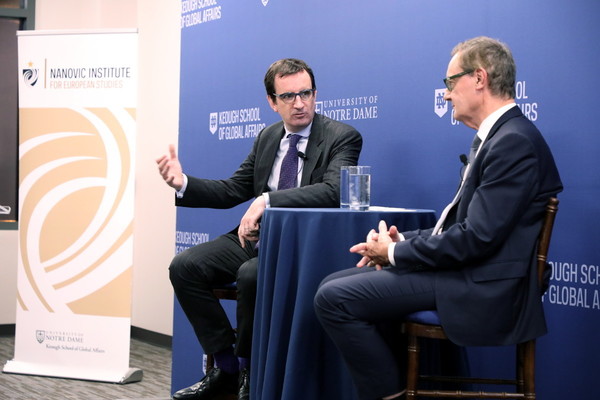 Discussion then turned to the Trump administration in particular. Does the Ambassador believe that American politics has fundamentally changed, or does the current administration represent an aberration? The Ambassador replied that just as the US probably underestimates the level of integration in Europe, Europeans generally underestimate "how diverse" America is. President Trump's position represents a tendency toward isolation in American politics that has "always been there as a reluctance to become involved in foreign entanglements. This tension is still present in American life," O'Sullivan observed, but such attitudes swing back and forth, and "they will change again."

Focus shifted to politics in Europe. The Ambassador believes that elections to the European Parliament (May 2019) will probably result in  greater representation of populist or nationalist parties. The extent of such representation is "difficult to predict." Explaining that people still vote in European elections according to their existing political parties at the national level, and in light of their local circumstances, the Ambassador concluded: "that's democracy." Despite such a shift in representation, "the European Union is not 'beleaguered,'" he said: "The European Union always looks like it is in difficulty, but there will continue to be a strong center that will hold." 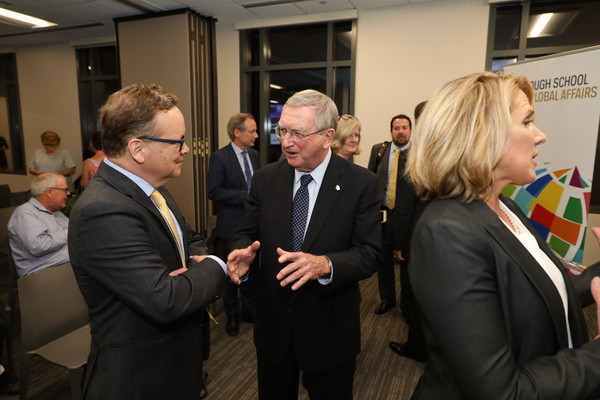 Discussion then turned to the deeper nature of political contests around the world. Mr. Wright asked whether it would it be more accurate to say that politics in Europe today is still essentially a struggle between Christian and Social Democrats, or is the struggle better expressed as a fight between populists and globalists? The Ambassador paused and granted that "it's a good question." He reviewed a number of national circumstances and concluded that at bottom, most political disagreements tend to be "more about policies and outcomes, not ideology."

Asked to speculate about the pursuit of European integration and its future, the Ambassador responded by describing two sets of issues. The first were challenges  he expected to loom larger in the coming years: digital union, energy union, migration, demographic change, the distribution of wealth, the changing nature of work itself, the impact of technology on global competitiveness, and "how to manage the global balance of power." He noted that China has continued to make powerful moves in central Asia, Europe, and Africa. 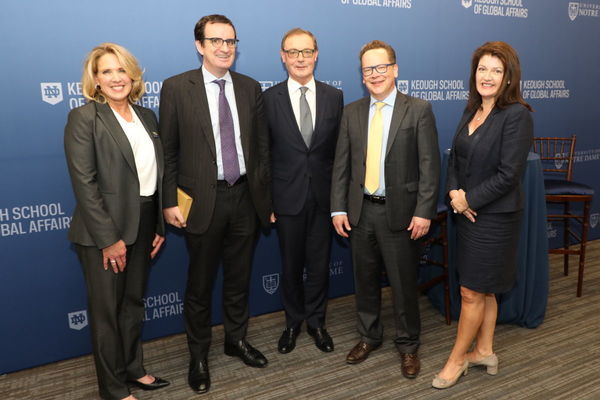 The second issue related to European integration was of course the exigencies surrounding Brexit. The Ambassador reported that an agreement was about 80% done. He was cautiously optimistic: "I think we can find a solution to the remaining 20%, much of which has to do with the border in northern Ireland." Remaining difficulties derive from uncertainty on the British end, he claimed: "the Brits need to decide what they want, and their domestic politics are making such decisions difficult." Granting that a disorderly departure would be bad, the Ambassador said  at this point, such disorder is "unlikely."

The Ambassador spoke to a full room of members from iRISH Network DC, which connects Irish professionals to their peers in the Washington area.