Steven Fisher '16, a major in Political Science and International Peace Studies with a Minor in Theology, recieved the 2015 Notre Dame Day Grant to for research and travel to Europe over the fall academic break.  Steven comments about how this grant and his other opportunities through the Nanovic have impacted his Notre Dame experience.

Will you take this opportunity to support us?

"As I prepare for my graduation from the University of Notre Dame, I give my gratitude to the Nanovic Institute for serving as a guide in my intellectual and vocational growth.  As Notre Dame students we have many opportunities available to us. As I reflect those given to me by the Nanovic have facilitated my most transformative experiences. Since I received a grant three years ago to study humanitarian policy during the Bosnian War, I have forged a path in post-conflict justice that has led me to Geneva, The Hague, and Sarajevo. In Europe, I have learned from international criminal lawyers, policymakers, and wartime survivors. The Nanovic not only offered me the resources to pursue this independent research, but also the encouragement that gave me the confidence to engage professional scholarship. Without that encouragement, I would not be exploring careers that seek the transformation of human concerns such as war and genocide. It takes much effort to dedicate oneself to the development of students. I am thankful to the Nanovic for the calibre and care they dedicated to my own growth at Notre Dame." 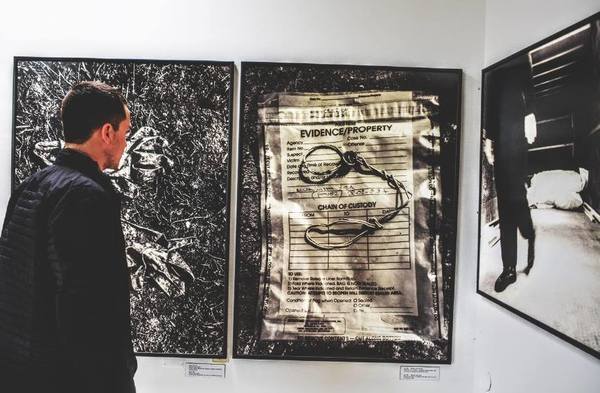 The War Behind the Law: Understanding Justice in Bosnia

My research comes from a photograph stuck in my mind. I first saw it in a media archive while studying the Tribunal for the Former Yugoslavia, known as the ICTY, in a previous research trip in The Hague. In it a woman sits alone. Behind her shoulder, tightly thatched photographs of individual men decorate the wall and wherever you look, each of these portraits seems to gaze beyond you. They are photographs of victims of the 1995 Srebrenica massacre. And in that room she just stares at a television. The man on the television screen returns the stare blankly. She is a Bosnian Muslim. He is a Bosnian Serb. The woman is in Srebrenica. The man is in the The Hague. She is watching the trial of Radovan Karadžić, accused of overseeing the death of the men on the wall. 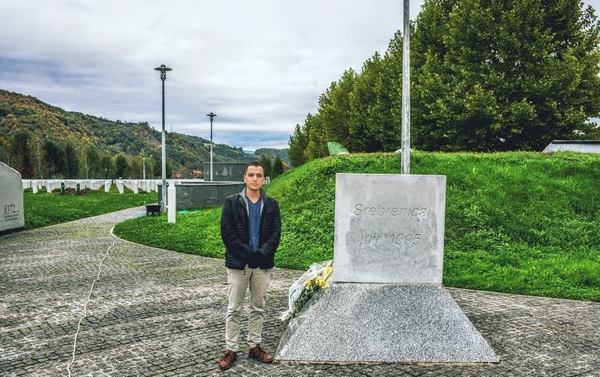 I wondered how the man made her feel in that room. It was the first time I considered the trial not as a test of justice but as a story that hoped to repair the broken dignity of a people. The story lived between the gaze of the woman and the gaze of the man and I wanted to discover what it had to tell. How does the woman’s experience illuminate the judicial decisions of the ICTY? Do the judges account for her idea of justice? Do the crimes as discussed in the courtroom resonate with her own experience of trauma, endurance, and survival?

These questions provoked the proposal for a third research trip exploring the Yugoslav conflict. With past research on humanitarian policy during the war and the politics of the ICTY, my questions attempted to transcend the accounts of war and justice I encountered in past. When my bias was built on the knowledge of my previous scholarship, it was crucial for me to step back and create space for the survivor’s story. The same is true when judges issue judicial decisions without traveling to Sarajevo and prosecutors proclaim justice for victims they never met. In every case the story is incomplete.Thus a research trip to Bosnia-Herzegovina offered a chance to interrogate the work of the ICTY and how it shapes the problems and attitudes toward Bosnian society through its assumptions.

The trip itself explored my questions through the examination of crime scenes: war sites, cemeteries, the memorials, the landscapes diversified by the hollow remains of bombarded houses, and galleries and museums that documented the experience. Through these experiences, I further understood how the subjectivities toward the ICTY are produced and understood; I discovered how the trials judicialized the narrative of the war, one where Bosnians remembered presidents as war criminals, soldiers as defendants, and victims as witnesses. 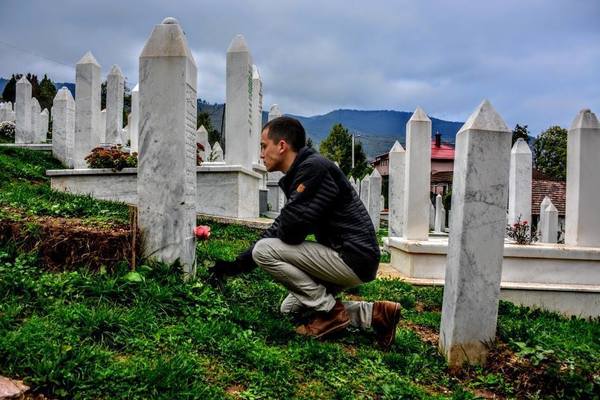 On one occasion I quickly went by the photographs of a gallery to look at everything, until one room pulled me in like a magnet. Like the photograph of the woman, I found myself in a room collaged by the portraits of victims of the 1995 Srebrenica massacre. That day I observed their faces in detail. The following day, I observed their graves in Srebrenica. Encountering a woman in the memorial cemetery, she shared her story of survival and the fate of her brother, father, and cousins buried in the cemetery. “It’s all on the verdict,” she told me. “It’s all the verdict to deal with those people responsible for this.”

Is this how the woman in the photograph felt? I found that the experiences of many Bosnians lacked resolution, or more accurately, closure. Closure remains elusive not only for political reasons but also because a host of questions remain obscure: who do we blame? how do we punish for crimes against humanity? And do we define our role now? This perhaps provides the most significant challenge to existing conversations of justice. Engagement in the living context of justice brought me back to the photograph, and momentarily, I found a story to bridge the gap between the woman and the man.

The threat of arrogance looms in academia. It is easy to believe that the world is an open book to be studied and analyzed with the conceptual tools acquired each semester. My experience in Sarajevo was both humbling and illuminating as a reminder that much of the story cannot be grasped through the priviledge of academic consumption and the incorporation of theories. As I discern whether to continue my pursuit of a graduate peace studies degree at Trinity College in Dublin, Ireland through the George Mitchell Scholarship Program, a law degree in the United States, or a career in humanitarian law with potential legal education in Europe as a citizen of the European Union, my experience in Sarajevo will serve as a reminder to acknowledge the role victims play in shaping the peacebuilding responses necessary.