Prinz Jeremy Llanes Dela Cruz ('15) recently graduated from the University of Notre Dame with majors in French and Philosophy. Jeremy has always had a passion for Catholic expressions of spirituality, and so the Nanovic-sponsored research that he has conducted has always addressed different aspects of that. During spring break of his senior year, for example, he used his Senior Travel and Research Grant to travel to Portugal to research the development of Marian devotion within Portuguese Catholicism. Jeremy recently sent us a report of his experience:

Blessed with maternal grace and tender virtues, the Virgin Mary remains a captivating figure in Roman Catholicism. Centuries of scholarship and art have explored the primacy of her theological role as the Mother of God, a testament to the faithful’s fascination with the fiat of the Handmaid of the Lord. Portugal continues to be one such cultural crossroad for Mariological study: the country maintains a distinctively Marian history characterized by zealous monarchs, fervent consecrations, and miraculous apparitions. I am grateful for having received a Senior Travel and Research Grant to travel to the Terra de Santa Maria during spring break. My research project explored the development of Marian devotion in the context of Portuguese Catholicism, a spiritual study greatly assisted by both scholars and laymen.

My foray into the Portuguese Catholic experience began even before we arrived in Lisbon. Feeling the desire to make a Confession before the journey, I approached a priest in the Newark Liberty International Airport for the Sacrament of Reconciliation. Rev. Ricardo Lameira was surprised by my ability to switch into Portuguese after my initial remarks in English proved incomprehensible to his Lusophone ears. After he discovered my plan to visit the Shrine of Our Lady of Fátima, he offered his personal insights regarding Marian devotion and the future of the Church in Portugal. He was even so kind as to offer to take me to the bus station at our arrival. My conversation with Fr. Lameira inspired me to simplify my research question to study the cultural role of Marian consecrations in Portugal. It was also fortunate that he was a priest of the Diocese of Évora, the same ecclesial district in which the Shrine of Our Lady of the Conception (Vila Viçosa) was erected by the monarchy to honor the national patroness. Although I was unable to visit the Shrine, Fr. Lameira provided me the contact information of Fr. Serra, a cleric who has performed research on the subject of the numerous Marian consecrations of the country.

The Shrine of Our Lady of Fátima served as a home base for my travel through Portugal. I was able to spend considerable time in conversations with pilgrims and shopkeepers about the country’s historical passion for Mariology. One shopkeeper, a British expat, gave me several books regarding the apparition of Our Lady of Fátima. He shared stories about his wife’s mother, who had personally met and interacted with Lúcia dos Santos and Jacinta and Francisco Marto, the three shepherds who witnessed the Virgin Mary during a period of six months in 1917. Having once been a quiet hamlet, Fátima has transformed itself into a bustling pilgrimage site, welcoming individuals from across the world. During the week, I had the opportunity to travel to neighboring Coimbra and Leiria. Founded in 1290, the University of Coimbra offers visitors informational tours of their sprawling campus. I was particularly humbled by the history of such an intellectual institution, whose local influence has earned Coimbra the reputation of being the city of students. The ornate Capela de São Miguel was of particular interest to me because it continues as the liturgical heart of the University in which students honor the Virgin Mary under her title as Our Lady of Light, invoking the luminous imagery associated with knowledge. I visited several churches in Coimbra, including the Monastery of the Holy Cross, erected by the Canons Regular of the Order of the Holy Cross. No study of Portuguese Catholicism would be complete without research on the Order of the Holy Cross, which built churches around the country and established the University of Coimbra. The Order also claims that it is due to its Marian spirituality that King João IV consecrated Portugal to Our Lady in 1646. In Leiria, I was able to explore the Castelo overlooking the city which was inhabited by King Afonso Henriques, who selected the Virgin Mary as the patroness of the country and his dynasty. The castle contains the ruins of the Igreja de Santa Maria da Pena, a house of worship once served by the Order of the Holy Cross. 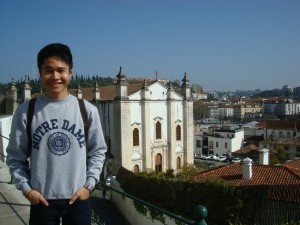 My interview with Dr. Marco Daniel Duarte, the Director of Studies and Propaganda at the Shrine, yielded many fruits. He emphasized the vitality of the Fátima apparitions as being both Christological and Trinitarian: unlike other Marian sites in Portugal, Fátima attracts hundreds of pilgrims because of its explicitly evangelical message of conversion and penitence as a means of growing in greater relationship with Jesus. The Portuguese affinity for the Virgin Mary is rooted in a desire for spiritual renewal and to overcome the challenges of life. The several consecrations of the country to the Blessed Virgin have certainly played a role in safeguarding the faith of the people against the onslaught of 20th century secularism by inspiring successive waves of new interest in the Church. Dr. Duarte believes that the special character of Portuguese Mariology revolves around the nation’s maritime past. In the manner of the great explorers like King Henrique the Navigator, Portuguese Catholics consider Mary as a path leading towards God within a contemporary spiritual age of discovery.

My travels and research in Portugal have inspired me to compose a paper and presentation on the sociological role of Marian consecrations in Portuguese culture. I was struck many times by the meaning of kneeling down in prayer inside centuries-old churches once filled with individuals performing the same acts of adoration throughout the ages. I appreciate the support of the Nanovic Institute in my formation as a Catholic scholar who understands that devotion transcends time.