This week's Student Spotlight features a pair of researchers:  Peter Fink and Benjamin Fouch.  They both received the relatively new FYS Spring Break Travel and Research Grant.  Peter has declared a supplememtary major in Arts and Letters Pre-Health, and Ben has declared a major in Political Science.  The pair traveled to Valencia, Spain over spring break to conduct research on the Parque Natural del Rio Turia.  They both wrote about their experience:

Peter Fink: I am intrigued by many things, but above all, I am particularly invested in health and its relation to culture.  While I have undoubtedly learned much in my classes at school, traveling to a new continent and studying my interests in a new cultural context has provided me with an opportunity unlike any other that has taught me lessons I could never have learned in the classroom.  With growing populations and economic uncertainty, offering people convenient and healthy living solutions becomes increasingly challenging.  Growing up in northwest Indiana and attending the University of Notre Dame, I am well aware of the difficulties that people face when trying to stay physically active year-round while balancing their professional and family lives.  Many times, after the gym membership fees, gas money, and proper workout attire, exercising can seem like an ordeal that is less than worth it.

I believe, however, that making activity an integrated part of one’s lifestyle and culture is far more important than getting to the gym and running on a treadmill several days of the week.  For this reason, I was immediately fascinated when my friend, fellow Hesbourgh-Yusko scholar and research partner Ben Fouch told me about Valencia’s Parque Natural del Rio Turia.  Essentially, after a catastrophic flood in 1957 that killed over eighty people and injured hundreds more, the city of Valencia, Spain decided to completely drain and divert the Rio Turia from its original course that ran through the city and create a city park in the topographically rich river bed that lay behind.  Although at the time many disputed the decision, the park is now a key feature of the city, a source of cultural identity, and a location that provides residents with a convenient way to stay active. 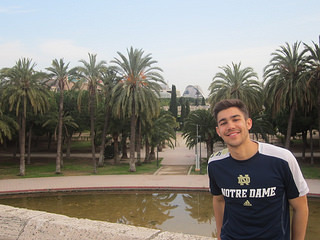 One of the things that made my time in Valencia so illuminating was the comprehensiveness of the research Ben and I were able to do.  Working together and combining his business interests with my interests about culture and health, we were able to acquire a wealth of knowledge about the park and observe its impacts from multiple levels.  The first and perhaps most effective approach we took towards our research was to engage in dialogue with locals about the park.  After several days of traversing the ten-kilometer park that runs through the city interviewing locals, it became evident that public approval of the terra-formed park is virtually ubiquitous.  I was curious to find out if there would be a difference of opinion about the park amongst varying demographics, but my research showed me that people of every age, gender, socioeconomic status, and ethnicity use and enjoy the twentieth century topographic wonder.  Another aspect about the park that I discovered through dialogue with locals was the expanse of its impact.  Street vendors, elderly men taking their siesta, and businesspeople found on the other side of the city all expressed gratitude for the park and claimed they used it frequently.  Before long, I came to realize that the park was not only a convenient and trendy location for residents to exercise, but also an object that provided the city with identity and pride.  People think of the park as a feature of their city that sets it apart from other European metropolises and brings out Valencia’s heritage while also making it contemporarily relevant.

Another way we learned about our research subject was by visiting the museums and libraries in Valencia.  For example, by visiting the history museum, I learned details about how the city was actually founded as a Roman settlement on the Rio Turia, something that explains the residents’ pride in the park and its tradition.  After delving into the stacks in the library and finding books describing the park’s construction, I learned that park designers placed every tree and stone with absolute purpose and actually preserved historic elements of the river such as its bridges while adding new paths and services that made the park both utilitarian and artistic.  Ben and I also took a trip to the City of Arts and Sciences museum at the end of the park, a feature that gives the historic and cultural space a sense of intellectualism and progressiveness.  Taking advantage of the city’s many resources allowed us to more fully understand what a masterpiece of urban planning the Parque Natural del Rio Turia truly is.

History is a valuable tool that allows us to examine past examples of failures and successes in order to better our lives today.  Much can be learned from the success story that is the transformation of the unruly Rio Turia into the useful Parque Natural del Rio Turia.  Upon my return to South Bend, I will have a new perspective on health, culture, and urban planning.  With this new perception in mind, I want to examine my community to see how its hindrances and setbacks can be turned into positive features that improve the health of its residences and highlight its culture.  None of the knowledge, cultural literacy, or experience I gained while in Valencia, Spain could have been possible without the generosity of the Nanovic Institute for European Studies at Notre Dame, so I want to sincerely thank everyone at the wonderful institution.  Muchas gracias, and go Irish! 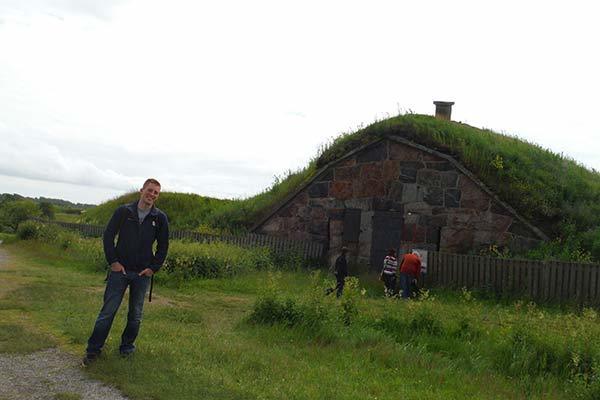 Benjamin Fouch: I had previous experience with the Jardín del Túria from my time studying abroad in Valencia with the IUHPFL. At the time I was fascinated by the park and the brief glimpses I saw of its history, but I lacked the time and resources to explore it further. The Nanovic Institute for European Studies’ recognition of the importance of the green, organic dimensions of urban planning and its successful execution in Europe made a return trip possible.

While in Valencia, I had a rare opportunity to leave textbooks behind and for the first time perform substantial research that incorporated more diverse sources. Through interviews with citizens who lived through the Inundación de 1957 and staff in one of the largest modern museums in Europe, I understood the impact of the river park in a new and intimate way. Looking at city’s data and statistics on revenue is useful, but the human consequences are as important if not more so in urban planning. The figures tell an important story, but the change in the citizens’ quality of living is the end goal of these projects. Despite taxes, an outspoken political culture, and a diverse population, the Valencian pride in the park was evident. There was an overwhelming positive perception of the park, demonstrating the Plan del Sur’s success. From on-the-ground interviews, I learned how the unique adaptation of the Río Túria’s riverbed into a park over the last half-century has shaped an entire city’s identity.

One element of international research that has been a great surprise has been the benefits of on-site archival research. Having grown up in a digital age, I expected that my initial research into the history of the park was relatively substantial. Upon arrival at the archives of the city, I found the books and pictures told an entirely different story than the one I had pieced together. A death toll as a statistic is one thing; a photo of a city swept away by floods is another. One image that will stick with me forever was a photo we found in a dusty old book at an old Valencian library. It depicted a man, sitting on a fallen column, watching as his home was washed into the Mediterranean. Such a powerful image revealed how such a massive, expensive undertaking could have been accomplished; the people had been deeply hurt.

One key finding from the research has been how the park’s design has impacted urban development. In many traditional parks, a square or rectangular layout it employed. This is by far the easiest strategy when accounting for classic street design. What is different about the Rio Turia is how it is organic. It bends and meanders through the city, covering a much wider area. This has led to less gentrification than with typical major parks; rather than become the haunt of the wealthy who could afford homes near the park, the Jardín del Túria is a place for all.

Political divides, potentially corrupt administrators, protests, royal intervention, and a final victory for the citizens of Valencia paint a picture of the Plan del Sur that is chaotic and instructive. The one hundred year vision of the plan, its meticulous execution, and the public presence in decision-making are some of the bright spots of the plan. My research in Valencia was incredibly rewarding because it allowed me to identify these great successes and reflect on how they can be applied more generally.

The Nanovic Institute’s First Year of Studies grant has reinforced my career aspirations. The Río Túria park illustrates the ideal philosophy and methodology for urban planning, and in my intended career in developing infrastructure in responsible ways. With careful planning, knowledge of a city’s needs and interests, an ear for input from interest groups, and responsible budgeting we can turn eyesores and economic liabilities into impressive revenue generating centers that dramatically improve the citizens’ quality of life.

Moving forward, during my undergraduate years I want to take what I have learned in Valencia and give back to the community. The “block” park structure adopted by the city has been shown to be impractical; if the city adopts the integrated approach of Valencia then they can create more green space that improves the property value of adjacent buildings. Upon graduation I will incorporate park development into broader human development strategies and urban planning that aims to reduce gentrification and unintentional property discrimination against first generation immigrants. Parks should not be a brief sanctuary for nature within an urban jungle, but instead a streamlined and sustainable companion to urban growth.

I am incredibly grateful both to Notre Dame and the Nanovic Institute for the incredible opportunity. Exposure to foreign culture, urban planning, and administration has given me some practical experience to frame further inquiry into the field of urban planning and collective action. Their investment in students like myself demonstrates their commitment to our shared future, and I do not intend to let the investment go to waste.