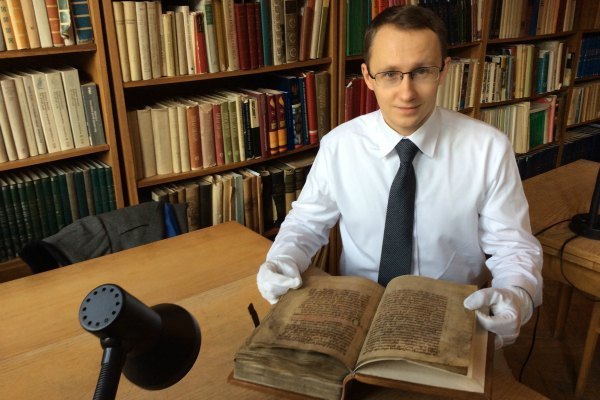 A famous twelfth-century manuscript stolen during WWII was retrieved in 2015 to the place of its origin in Płock (Poland). Paweł Figurski, a master's candidate in Theology, received a Graduate Break Travel and Research Grant to investigate the mysteries of the medieval book that served to sacralize political power in the forgotten duchy of Mazovia (ca. 1150-1300). Paweł recently wrote to us about his research:

During the summer of 1939, Dr. Rudolf Diesch, the director of the Staatsbibliothek in Königsberg, visited the library of the diocesan seminary in Płock and admired the medieval collection of liturgical books. In the spring of 1940, Dr. Diesch returned to Płock with German soldiers in order to prepare a list of the manuscripts that were to be confiscated. This confiscation occurred in the very same year. On May 28, 1973, the auction house "Hartung und Karl" put a precious manuscript up for sale, in which some parchment leaves were cut off in the places where the seal of the library was usually stamped. Bayerische Staatsbibliothek in Munich purchased the book. The auction house "Hartung und Karl" was connected to the central auction house in Leipzig, an institution under control of the STASI, who, among others, used to sell robbed heritage pieces during WWII. In 1977 it appeared that the book sold by "Hartung und Karl" to Munich was the famous pontifical from Płock, the twelfth century manuscript robbed during WWII. Since then Polish libraries have tried to retrieve the codex, though unsuccessfully until spring 2015, when it was restored to Poland and was the main attraction of the annual festival held in Płock[1].

The aim of my project generously funded by the Nanovic Institute was to analyze this medieval manuscript from the twelfth century Mazovia region (Poland). As the new acquisition of Polish libraries, the manuscript was available to me to conduct multi-faceted research on its external (codicology, paleography) and internal content (liturgical prayers). The manuscript is the oldest representative of the Roman-German Pontifical from Poland, and provides detailed insight into the history of Piast duchies in the time, as few written sources from this time have survived. The manuscript offers various research possibilities. It contextualizes the history of the Polish region of Mazovia into the wider European historiography on the struggle over world order between ecclesiastical hierarchs and civil rulers.

The research on the political theology represented in the pontifical of Płock has not been conducted earlier by academia. There has been systematic dealing with the manuscript by Antoni Podleś, but the exploration was based on a microfiche copy rather than the manuscript itself[2]. Thus, the codicological (study on the production of the manuscript) and paleographical (study on the script) analysis had not yet been properly done and this negligence was undone thanks to the personal examination of the manuscript. Moreover, the manuscript was not included by scholars interested with Roman-German Pontifical and it was, therefore, worthwhile to examine whether Płock Pontifical confirms or contradicts the theses expressed by liturgists[3].

My research on the manuscript from Płock supports the ideas of a supernatural aura which clouded the Piast dukes in the twelfth century. In the book there is the famous text entitled “ordo ad regem benedicendum quando novus a clero et populo sublimatur in regnum.’’ This text, very popular around year 1000 and in the next century, served during the coronations of many kings, especially in the German Reich, but also in other European kingdoms. In the “ordo’’ there is a prescription of norms which should bind the rulers. Moreover, according to the text the ruler participates in the ministry of bishops and is even a vicar of Christ! Thus, the text had an influence on the sacralization of political power[4].

Due to the paleographical and codicological research I argue that the text of ’’ordo’’ could have inspired Mazovian dukes in their efforts to sacralize their ducal power. Thus, thanks to the personal examination of the manuscript it was possible to confirm that the manuscript, since its beginning, was prepared for Płock, and not for other dioceses. The Poznań provenance, attributed by some scholars, foremost Władysław Abraham, could have been finally excluded. Many mistakes in editing the text by Antoni Podleś could have been also corrected. Moreover, many other unknown features of the book could have been also noticed, such as that it was not written by one hand, as claimed by the editor of the text[5].

However, these discoveries beg further question: why did the scribes copy “ordo” for the Płock bishopric which could not have been used in Mazovia? Ernst Kantorowicz would like to hold that ’’ordo ad regem benedicendum’’ was performed occasionally during festival coronations when a king visited various religious institutions and therefore the text is preserved in places where no inauguration of power was taking place. This cannot be true in regard to Mazovia where it could not have been performed during festival coronation since there was no king[6]. I propose a different answer: The liturgical texts provided not only material for the religious celebrations but also transmitted the ideas on the nature of political power. Therefore “ordo” from Płock Pontifical presumably served to sacralize political power of the Mazovian dukes which could be encountered also in other sources from the High Middle Ages. The ambitious rulers of Mazovia, although still dukes, strived to appropriate for themselves an ideology of power which used to belong to the medieval anointed figures – kings and emperors.

The conducted project was a part of my larger efforts to reconstruct medieval political theology based on the research on the liturgical sources. The results of my research were presented at a workshop, "Liturgy and Politics - New Perspectives of Research,” which I organized within the project. The event took place in Warsaw on January 8th, 2016[7]. Moreover, I utilized my findings from this research in the publication ”Boleslaus II of Mazovia as "rex et sacerdos"? Exultet from Płock and the Sacralization of Political Power in the Middle Ages,” on which I am currently working within the international research group "Rex nunquam moritur: Political Theologies from the Middle Ages up to the Present”[8]. As a member of the team I analyze political theology in the Mazovia region at the turn of the thirteenth and fourteenth centuries based on the analysis of the other liturgical book from Mazovia (Gradual, produced ca. 1310). The research on the Płock Pontifical confirmed my main argument that the rulers of medieval Mazovia, although only dukes, took up royal means of elevating their political power into the supernatural order.

Thank you, Nanovic Institute, for this unique and amazing opportunity.

[6] Ernst Kantorowicz, Laudes Regiae: A Study in Liturgical Acclamations and Mediaeval Ruler Worship. (With a Study of the Music of the Laudes and Musical Transcriptions by Manfred F. Bukofzer) (Berkeley and Los Angeles: University of California Press, 19582), p. 96-97.