The “refugee crisis” is a term used in everyday political discourse to depict the disorder and lawlessness at Europe’s borders. Nick Courtney (’18), a double-major in Accounting and Applied Math, received The Snider Family Endowment for Excellence in European Studies to meet refugees, non-profit workers, and government officials so to understand the humans that are affected behind the media headlines.  Nick recently wrote to us about his experience:

There are currently 65.3 million people forcibly displaced from their homes, according to the latest UNHCR data, the highest number ever recorded. Over one million of those refugees entered Europe in 2015, causing increased tensions as European governments and citizens are deciding how best to handle the newcomers. How well do reception institutions meet the needs of refugees? What roles do governments and non-profits play in the integration process? How do refugees react to their interactions with Europeans?

This summer I traveled with Soren Kyhl and Michael McRoskey to Italy, Greece, Germany, Sweden, and Washington DC to examine refugee migration and integration. We spent time in a refugee camp, at reception centers, with international non-profits, and with university professors to learn about the migration journeys of refugees and what the reception efforts in Europe look like. Our goals were to study these topics, listen to the migration stories of refugees, and share our experiences with an American public whose discussions about refugees are often devoid of consideration for the impact public policy in this field has on the humans actually affected by it.

It is a sad truth that the poorest people in violence-stricken countries often do not have the networks and financial means to leave. Many of the refugees that make it to Europe are well-educated, had good jobs and strong family networks back home. I met teachers, engineers, medical school students, dairy farmers, and bakers. They never would have left their home countries if not for the serious threats to the safety of their families. We met children whose classrooms were bombed and who hadn’t been to school in three years. It made me ask, If this were my family in this situation, wouldn’t we flee too?

Many refugees yearn to return home as soon as it is safe to do so, prompting the majority to remain in neighboring countries. Nearly 2 million Syrians are currently living in Jordan and Lebanon, countries lacking the infrastructure to properly support a population surge of that size. Even those who decide to make the treacherous journey to Europe find that life there is not the paradise they were promised. Multiple Syrians in a refugee camp in Ritsona, Greece told me they might decide to return to Syria to at least be with their families in their homeland rather than waiting unproductively and without purpose in the desolate camp. “In Syria you die quickly,” a 22-year old Syrian named Muhammed told me, “but here we are dying slowly.” Muhammed was an electrical engineering student, but left Syria before finishing his degree in the hope of eventually bringing the rest of his family to Europe. Young men cry as they think of the families they left behind and wait for an asylum process that often takes over two years. Many have fled from persecution by paying smugglers to escape from their country and cross the Mediterranean on small rafts, only to be meet by confinement in refugee camps and years of waiting before they can work.

Given the trauma they’d experienced, I was amazed at the generosity and friendliness of the refugees we met. Refugees at the Moabit registration center in Berlin offer to help the non-profit workers organize donations, check-in new arrivals, and distribute coffee. We were showered in Ritsona with people welcoming us into their tents, making us tea, inviting us into their soccer games, and telling us stories of life back home. One group of Muslim families invited us to share in their iftar meal to break their Ramadan fast, offering us heaping portions of pita, chicken, potatoes and hummus. In spite of their desolate conditions, lost loved ones, and bleak future outlook, they made us feel like part of their family.

One exception was a man at Ritsona who started a shouting match in Arabic with a volunteer who broke the news to him that he could no longer cool his yogurt in the warehouse refrigeration unit. It was easy at first to chastise this man for being irrational and hot-tempered. But after the situation deescalated, a volunteer named Chloe offered me a different perspective. She reminded me that this was a man who in the past few years has seen almost all of his freedom and pleasures stripped away. Not being able to refrigerate yogurt was yet another basic need he failed to provide for his kids. Isolated instances of violent outbreaks in camps have been covered by the media, typically fueling anti-refugee sentiment. Yet I am more surprised at the rarity of such occurrences. One can only expect a group of people to stay calm for so long after undergoing so much grief and trauma, only to be met with confinement and bureaucracy in the place they hoped would be a new home. Lashing out under such circumstances is not strictly an Arabic or refugee response; it’s a human response. I know plenty of Americans who would never stand for sleeping in tents during the 90 degree summer, waiting in a registration line for ten days, or sitting indefinitely in the middle of nowhere with nothing to keep their family occupied. 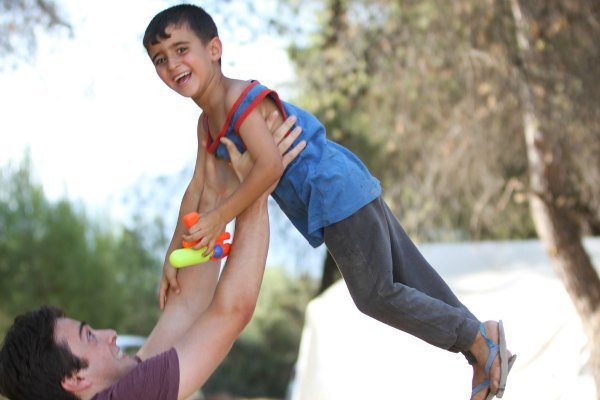 Governments and non-profits are put in a tenuous position as they find the right way to distribute resources among refugees and native citizens. Some European governments have responded to the mass migration by building border walls and shutting down migration, putting increasing pressure on countries like Germany, Sweden, and Greece who have more open borders. Government structures are strained to meet basic structural and administrative needs while balancing their own citizens’ interests, leaving most of the integration efforts to non-profits and local citizens. Many non-profits offer legal aid, language classes, clothing donations, and cultural orientation. This human interaction and network building is vital for the continued success of any newcomer.

Many refugees asked me why the United States won’t help them. “You Americans treat your dogs better than you treat us,” a middle-aged father somberly told me. It was uncomfortable telling Syrians that we Americans were the ones worried about terrorists, when their towns had survived more bombings in the last few months than the entire US has seen in years. The US has agreed to resettle 85,000 refugees referred by the UN in 2016 (by far more than any other country will resettle through the UN system, though much smaller than the number of asylum seekers arriving in many Middle Eastern and European countries). The screening process is more stringent for refugees than any other travelers entering the US. We met with officials at the US Bureau of Population and Migration who described the intense vetting process which includes biometric scans, interviews, and background checks from the Departments of State, Defense, and Homeland Security, the National Counterterrorism Team, and the FBI. This process takes years, but the refugees I met in Europe will never make it this far. The US only resettles the most vulnerable people out of countries whose situations are the most dire, and as desperate as they may be, refugees who’ve already made it to Europe don’t qualify. This is reserved frequently for families and the disabled who are waiting temporarily in countries like Jordan, Lebanon, Kenya, or Thailand.

As I’ve returned from my trip, it’s hard to rationalize returning to my normal life in the United States when I am acutely aware of the immense struggles that refugees are facing every day. In my Facebook feed, I see pictures of the Golden Dome just after scrolling through a Syrian friend’s plea for help. Even while on my trip, it was hard to decide what my impact on these people’s lives could be. A Syrian man named Yusuf told me after dinner in the camp one night, “For us this is suffering, for you it is tourism.” It was an uncomfortable reality to be faced with and one that I hope to prove false. It’s been a goal of mine to share the stories of the humans behind the veil of the term, “the refugee crisis.” Moving forward I will share these experiences through the promotion of a documentary Michael, Soren, and I will produce and by starting a chapter of George Washington University’s No Lost Generation club on Notre Dame’s campus to promote education in refugee camps. I hope that by raising some of the challenging questions that arose from this experience, I can work towards reshaping the way Americans think about refugees.