Khaoula Morchid ('17) is a Civil Engineering major and an Anthropology minor. The Nanovic Institute awarded her a Break Travel and Research Grant for Sophomores and Juniors to conduct research on Arab entrepreneurs in the Netherlands and Sweden over spring break. We also awarded her a grant a year ago, when she was in her first year of studies, to research the same topic in Germany. Khaoula has clearly benefited from being able to begin pursuing her academic passion at an early stage! She recently wrote to us about her experience: 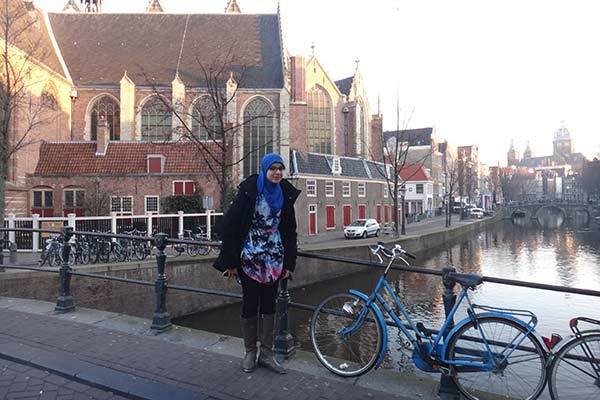 Last spring break, I received a Nanovic travel and research grant to go to Amsterdam and Stockholm to do research on Arab Entrepreneurs and their engagement in the Dutch and Swedish entrepreneurial scenes. I was very interested in learning stories of migrant entrepreneurs in the Netherlands where 70.8% of immigrants are from Arab countries with Morocco being the main country of origin, and in Sweden where it is 55.3% with Iraq being the main country of origin according to Jean-Christophe Dumont.

Having spent the previous spring break doing research on Arab migrants in Germany, thanks to the Nanovic Institute for European Studies, I was eager to do a comparative analysis between Sweden, the Netherlands and Germany, especially after reading about their different immigration policies and learning about migrants’ experience in Germany first hand. Being on the ground for research has been a tremendous learning experience. The process itself reminds me of how continuous the learning process is and makes me more passionate about pursuing research and coming to stronger conclusions.

Following my advisor’s recommendation, I was open to learning beyond my research question and making vivid observations about aspects of life in both Amsterdam and Stockholm that shaped the journeys of Arab entrepreneurs. That led to interactions with Arab shop owners in their work place, who shared their stories moving to Amsterdam and starting small businesses that grew to provide employment in the area. Their entrepreneurial journeys were eye opening and inspiring given the obstacles they faced institutionally, socially and linguistically. The common struggle makes them build a strong community of citizens from Arab origins and draws more migrants to their circles, which is one of the reasons Moroccans are the largest migrant population in the Netherlands and they still embrace aspects of their culture regularly. The amount of Moroccan Darija I heard walking down the streets of Amsterdam is incomparable to anywhere else I have been, yet Dutch Moroccans seemed to master the country’s language fully. Moroccan migrants did not only work on integrating in the host society, but they also kept parts of their identity strongly present on a daily basis.

Language played a big role in the equation. Sweden and the Netherlands were two of the first European countries to pay much attention to migrants’ language command while other nations rarely included language courses in the workers’ package because “manual work could be organized without language skills and long-term settlement was not intended”. I read about this particular aspect on a paper published by the International Migration Review, co-authored by Jutta Hoehne and Ines Michalowski and titled “Long-Term Effects of Language Course Timing on Language Acquisition and Social Contacts: Turkish and Moroccan Immigrants in Western Europe.” However, observing it first hand gave my understanding other dimensions.

Some of the most visible enterprises in both Stockholm and Amsterdam were food related and served Middle Eastern food that was highly demanded by locals, tourists and migrants who see more in that Shawarma meal than the food itself. The people who started them also didn’t need technical skills and made good use of their unique background and that of new migrants who work with them. It was noteworthy to learn about the enterprises created to address needs of these communities such as the growing Halal meat business sector.

My visits to the University of Amsterdam, Kungliga Tekniska Högskolan (KTH) and the National Library of Sweden among others gave me access to resources I hadn’t considered before and that’s a very useful lesson I am taking moving forward with my research. Besides, I learnt about the limitations of international research as the National Library of Sweden for instance was renovating the large section with books in English and had few displayed in a smaller section.

My research trip broadened my understanding of entrepreneurship in the first place and taught me more about the anthropological aspect of entrepreneurs’ lives. It also helped me refine my plans for senior thesis and inspired me to learn more in my home country Morocco and other Arab countries to grasp the full picture I am investigating.

Finally, I am incredibly thankful to the Nanovic Institute for European Studies for the opportunity to pursue a question I am passionate about from my unique perspective as a migrant and aspiring entrepreneur. I am grateful to the donors and staff members for their generosity and their efforts to promote the intellectual growth of students and help them explore ways to contribute to academia from an early stage and shape the development of the world today from their respective backgrounds.