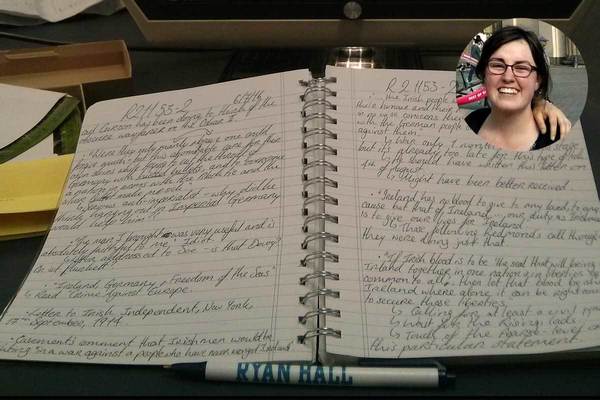 Sir Roger Casement's time in Germany is often overlooked in Irish historiography of the 1916 Easter Rising. Dearbhla Fay ('17), a double major in History and German, received a Summer Travel and Research Grant from the Nanovic Institute to investigate this oft-forgotten aspect of the Rising and the effect Casement's mission ultimately had on Ireland's quest for independence. Dearbhla recently wrote to us about her research:

2016 marks the centenary of the 1916 Rising in Ireland – an event known as the catalyst that ultimately lead to Irish independence. Roger Casement is known in Ireland today as a hero of the Rising, one who was executed by the British government after a show-trial and a campaign that besmirched his character and branded him as a homosexual – something that was unforgivable in early twentieth-century Ireland. It took many years before the Irish people were willing to embrace him as one of the heroes of the Rising. However, the repatriation of his body and state funeral in 1966 marked a clear shift from the British narrative to an Irish one. However, in this new Irish narrative, the Easter Rising became thought of as a solely Irish event; an idea that came into being and was acted upon by Irish people alone. This excludes the large role played by Irish-America as well as downplays Casement's time in Germany and his dealings with the German government. It was my intention to research his time in Germany from the point of view of the German government in order to discover how important of a role they had played in this key period of Irish history, as well as why it might be so overlooked in Irish historical writings of the 1916 Rising.

I spent several weeks reading Casement's papers in the archives of the German Foreign Office. Casement had very clear ideas about how the German government could assist the Irish revolutionaries in their struggle against the British. It was Casement's claim that the majority of the Irish people were rooting for a German victory in the war. The German government believed these reports and agreed to allow Casement free reign to create an Irish Brigade from Irish prisoners of war in German camps, all of whom had been taken captive while fighting for the British Army. This Irish Brigade was created with the intent of traveling to Ireland and assisting the rebel forces in rebellion with arms and ammunition supplied by the German government. Ultimately, the Brigade was a failure. I learned while in Berlin that Casement had thought he could recruit around 1,500 Irish prisoners of war to his Brigade. He actually recruited 53.

From what I read in the archives, the German government believed Casement was a leader of the revolutionaries, when in actuality he was not even a member of the Irish Republican Brotherhood, the group whose Military Council was responsible for planning the Rising, and whose members were executed in the wake of the rebellion. They took him at his word, that the majority of Irish people were ready and willing to fight against the British to free themselves from colonial rule. In fact, most Irish people at the outbreak of World War I were willing to follow the advice of Irish Parliamentary Party leader John Redmond, and to fight for the British Army in order to gain Home Rule for Ireland once the war came to a close. However, I also learned in the archives in Berlin that literature in Ireland during the war was highly censored. It is therefore understandable why the German government was willing to listen to Casement – they thought any writing coming from Ireland itself had been censored and perhaps even sponsored by the British government. As well, Casement's reports were confirmed by the Irish-American community. This group was amazingly influential at the time, both in the United States and in the Irish quest for independence. It was the leading Irish-American figures who initially introduced Casement to the German ambassador to the US, as well as bankrolled his trip to Germany.

The significance of what I learned shows that Casement received a very large amount of help from the German government and from the Irish nationalists in America. There is a perception in Ireland that the 1916 Rising was an organic event, despite the line in the Proclamation of the Irish Republic which says the rebellion was made possible through the support of Ireland's “exiled children in America and her gallant allies in Europe.” Too often, Irish narratives of the Easter Rising tend to place it in the context of a glorious revolution that was supported by the majority of Irish people and that was the step that led to Ireland becoming an independent nation. While the Rising was important in the latter sense, there can be no denying that the vast majority of Irish people did not support the Rising. If it had not been for the British government's bungling of the trials and executions of the leaders, Irish people may have been happy to wait until the end of the war and accepted Home Rule. Those pushing for revolution in 1916 were a small minority of radicals who were given huge support from America as well as Germany. The significance of Roger Casement's time in Germany cannot be overlooked simply because it doesn't fit with the truly nationalist Irish narrative of the 1916 Easter Rising.

The research I did in Berlin was truly eye-opening. Not only did it allow me to learn about an aspect of the 1916 Rising that is often overlooked, it also gave me great insight into the research process and the life of the historian. Learning about the process of research and writing based on research was very important because it gave me an insight into what my life would be like if I were to continue studying history at graduate school. My research has helped greatly in shaping my senior thesis project, which I have begun work on and which I will submit in April of 2017. I am extremely grateful to the Nanovic Institute for giving me this incredible opportunity and for helping greatly in both my academic and personal development.