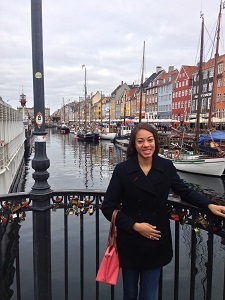 The Nanovic Institute funded quite a number of students to conduct research in Europe over fall break, and they did some amazing work! One of those students is Cristina Bordeaux ('16), an International Economics major who received a Senior Travel and Research Grant to conduct capstone research in Copenhagen. While there, she combined the analysis of textual sources and in-person interviews to explore cultural perceptions of homelessness. Cristina recently wrote to us about her experience:

During fall break, I stayed in Copenhagen for a week. While in Denmark, I spent my time conducting interviews to survey the public’s opinion on homelessness and learn more about the institutions of the country. In addition to the interviews, I also spent time analyzing textual sources at the Royal Library. The information that I gathered will be utilized in my senior capstone project that is required by my minor in Catholic Social Tradition.

My research involves looking into the public opinions of the people of Copenhagen about the homelessness and the policies that the welfare state has put in place. After speaking to a friend over the summer, I realized that many people have false notions about the homeless and perpetuate false stereotypes. Having worked in many homeless shelters across the United States, these misconceptions captured my interest. Being an International Economics major, I began to wonder about how other countries deal with homelessness and whether those societies also harbored gross misconceptions of homeless populations. I wanted to look at another country as a case study to learn about different approaches to homelessness and if any of these methods could be effectively applied in the United States. I chose to investigate the homeless situation in Denmark because although it is a significantly smaller country, it has one of the lowest homeless rates in the world and because it is a welfare state, it offers many differences and comparisons for analysis. My capstone project looks at whether or not the opinions of the general public reflect the reality of the situation. It does this by comparing the statistical realities of homelessness in the United States and Denmark and the consequences that they have had on the public opinions of the homeless. I investigated this topic by doing research at The Royal Library about the inner workings of the Danish government and holding interviews to uncover the opinions of the general public.

I spent much of my free time at coffee shops and mingling with locals. In addition to being able to talk to them about homelessness and getting a better feel of public opinions, it was also a unique opportunity to learn about another country and their way of life. It allowed me to better understand why the welfare state works so well in Denmark and the fundamental differences between how we live and what we are taught in the United States versus in Denmark. The value of experiencing Danish culture cannot be overstated.

Throughout the week, I conducted interviews with a wide range of individuals in order to hear as many perspectives of homelessness in Denmark as possible. These individuals included a director of a homeless shelter, professors at the University of Copenhagen, a bar owner, college students, waiters, and a variety of others. I asked them questions that allowed me to better understand homelessness in Denmark. Examples of these questions include asking about the perceived advantages and disadvantages of the welfare state and what they thought was the biggest cause of homelessness. The interviews were an integral part of my research and they permitted me to engage with members of the general public on a personal basis. My senior capstone will be ongoing and as of yet, I have not reached a conclusion but in these early stages, I have noticed the emergence of an intriguing trend. In the United States, homeless rates are higher and there are far fewer opportunities to better one’s situation, but Americans tend to see the homeless as lazy and not willing to work hard. The opposite is true in Denmark. There, there are many more opportunities for bettering one’s self but the general public tends to be much more sympathetic to those who are worse off. This is the opposite of what most people would expect and has given me much to ponder before I finish my capstone project.

This trip and research greatly advanced my academic career and development in a variety of ways.  It did this by giving me the opportunity to investigate a topic that I am passionate about and interests me. When I am done with this research, I will produce a report that not only will show others what I am capable of, but also speaks about an issue that is very dear to me. It assisted my academic career because it will give my senior capstone project first-hand accounts and more authentic meaning. This grant gave me the opportunity to explore a topic that is an ongoing epidemic, homelessness. I wanted to be able to learn about how this problem is approached in other countries and whether the United States could implement any of these different methods. In addition to this, probing the effects of these policies on public opinions of the homeless played a large role in my research because I wanted to see what types of effects these fundamental differences had on society as a whole. Because I was able to receive funding, I not only delved deeper into my interests, but I also gained knowledge about a misunderstood challenge. I hope to carry this new understanding with me throughout my future and use it to help alleviate the pains and struggles that are associated with homelessness.

I extend my sincere gratitude to the Nanovic Institute for making this experience possible and funding research that will be used for my senior capstone project. It was truly a trip that I will never forget and taught me about a sad reality that is often not given much thought when traveling to other countries.