Courtney Haddick is a senior from the School of Architecture. Courtney has received a number of grants from the Nanovic Institute. Her latest took her to Paris to view archival drawings by Giuseppe Valadier. She recently sent us a number of really great photographs from her trip, along with a description of her work and her experience.

Giuseppe Valadier is one of the most important and influential architects of nineteenth century Rome, and yet documentation on his work is severely lacking. His work was been largely associated with the Napoleonic occupation of Rome from 1809 to 1814.  The Italian distaste for the French occupation has unfortunately led to an overlook of much of Valadier’s work. This research endeavor, with Professor Selena Anders, aims to overcome that.

Valadier’s most famous work is the Piazza del Popolo, located on the Northern end of the historic center of the city. Valadier worked on a multitude of other proposals throughout the city, both on the architectural and urban scales, but many were never built after Napoleon withdrew from Rome in 1814. To date, there has never been compiled a comprehensive plan of the city, incorporating all of these proposals, showing what Rome could have looked like had Napoleon and Valadier succeeded in building them all.

We are currently working towards compiling such a map, work which began last spring in the Roman Archives with the support of the Nanovic Institute. We were able to access many of Valadier’s original drawings, quite a few of which had never been published. We discovered, however, that many of the drawings we needed were in fact located in Paris, where they had been sent back with reports to Napoleon. 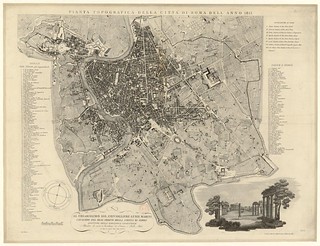 The map of Rome (1813) that served as a starting point for Haddick.

The first document I was able to track down was a map of Rome by Pietro Ruga from the year 1813. This map was located in the Biblioteque Nationale de France in the special Maps and Plans collection of the Richelieu Research Library. This map was done in a similar style to the famous plan of Rome from 1748 by Giambattista Nolli. The date of the map lines up perfectly with the period of Napoleonic occupation, and shows us exactly what the state of Rome was at the time we are studying. This map will serve as the base from which our Valadian map will be drawn. The experience of accessing the map was wonderful, as it is located in one of the most beautiful libraries, and the staff was happy to assist in the research. I was also shown how to obtain a higher resolution digitization of the map for our purposes, which is available to the public.

I am now in the process of digitally creating an image with various layers showing the various proposals, what was built, what was proposed for demolition, what buildings were never realized, etc. When complete, the map will include a feature where one can digitally cycle through the various stages of completion to see not only what was built or proposed, but also the progression chronologically. The hope is that the layout will be similar to a map the Notre Dame School of Architecture Library has created of Seaside, Florida, in the Seaside Research Portal, where one can fade through a series of maps showing the evolution of the town.

Many of Valadier’s drawings that I viewed in Paris were quite large and detailed, and the high graphic quality of these drawings lends itself well to the incorporation into the map. I was able to photograph and document the drawings as I located them within the Archives collections. I am now working on inserting them into the 1813 map. Once all of the drawings are stitched together and everything is properly scaled and aligned, I will create one overall drawing with everything shown in one graphic style, with a system of color codes to differentiate layers of the map. 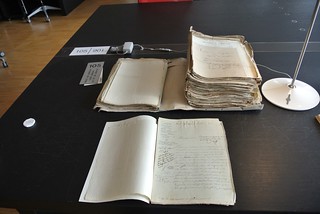 A photo of some of the archival sources with which Haddick worked.

Once the map is compiled, we will coordinate with some of the staff in the Architecture Library to help create an online tool where one can click on each intervention on the map and bring up additional images of the interventions. For proposed interventions, this will include additional drawings from Valadier for the proposal, as well as photographs of the area as it was developed instead. For his works, which were actually realized, this will also include photographs (both historic and contemporary when possible) of the site as it was built and how it has remained or evolved today.  In this way, all of the documentation collected will be available together, and will be organized and accessible through a single graphic--the map.

A secondary endeavor on this trip was working to understand the various parallels between Valadier’s proposals in Rome and Haussmann’s dramatic interventions in Paris done at the same time. Though the cities clearly have different characteristics, there are more similarities than one might expect. Via del Corso in Rome may have existed in part before Napoleon, but the relationship between the Capitoline and Piazza del Popolo that he was altering bear striking resemblances to the Champs Elysees. In fact the layout of the node created at the Arc de Triomphe in Paris is very similar to that of the obelisk and fountain in Piazza del Popolo.

The trajectory of this research will hopefully incorporate more analysis of the relationships between Haussmann’s and Valadier’s urbanism. This may take the form of analytical drawings and sketches, similar to those completed in Paris, or may even be developed to be incorporated into the digital map. The aim is for this map to be fully developed and launched by the end of this academic year.