Christina Jones is a law student at the University of Notre Dame. She is also one of four students to whom the Nanovic Institute awarded a Graduate Professional Development Grant to participate in a Moot Court Competition on Law and Religion in Venice. The experience was not simply about a chance to compete; it also provided a good education on the differences between American and European courts and the ways issues are addressed. Christina recently sent us a fascinating reflection on her trip. 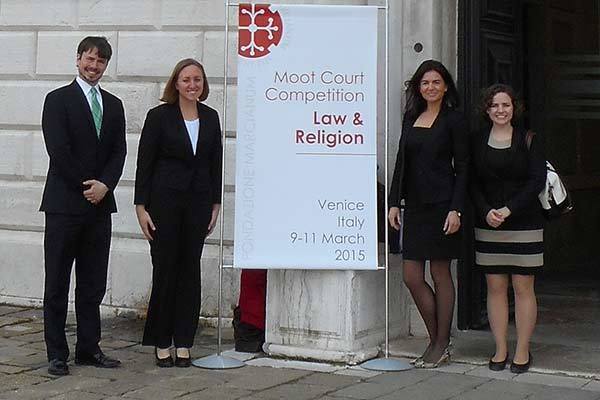 Through the support of the Nanovic Institute of European Studies, I was able to attend a three-day Moot Court Competition on Law & Religion in Venice, Italy. This was truly an opportunity of a lifetime that I will always regard as foundational to my law school career.

Representing Notre Dame, we were one of three teams arguing in front of a mock United States Supreme Court. Perhaps even more interesting, we got to watch four European teams argue their case from the same set of facts are ours, but applying European law and arguing in front of a mock European Court of Human Rights. It was a real cross-cultural (and cross-legal) experience that left me with a deeper understanding of the issues and a different perspective on how the different systems approach them.

The problem itself was thorny and fascinating. We got to tackle the issue of whether claims of religious exercise by any employer can justify discrimination against an employee. This has become an increasingly contentious issue, as recent cases like Hobby Lobby v. Burwell have deemed for-profit corporations capable of exercising religion. This directly challenges the application of Title VII of the Civil Rights Act of 1964, which protects employees from being discriminated against on account of their religion. As we struggled to draw the lines (albeit in favor of our fictitious client, the employee), my teammates and I had to embrace the complexity of the issue, and spent hours upon hours debating which policy we should be advocating. These are big issues the courts will have to address, and it was thrilling to be on the cutting edge of the law devising arguments. The American judges included Notre Dame Professor Bill Kelley, as well as a professor from St. John’s University and a federal district judge from New York; they absolutely grilled us during oral argument, and demonstrated just how difficult a question this is. It forced me to think about these issues much more deeply than I had ever done.

Listening to the four European teams (2 British, 1 Belgium, 1 Italian) argue added another layer of complexity and learning.  It was stunning just how differently the sets of arguments proceeded. For one thing, the interplay between judges and attorneys was astonishingly different -- the oralists delivered their remarks uninterrupted, then were given a few questions at the end, time to prepare answers, and the opportunity to address the questions. This is a marked difference from the constant interruption from the bench Americans are accustomed to in oral argument. But we also noticed a lack of reliance of case law as precedent, and more reliance on the European Convention itself and policy arguments.

I'm taking European Union Law and International Human Rights Law this semester in Notre Dame’s campus in London, but I have a much clearer understanding of how the ECHR operates as a result of the tournament. It quite literally came to life. The outcome of the case and a discussion with a European judge also revealed how little I knew about the European Convention. Going into the tournament, I thought this was a slam dunk case for the employee, given the rights to privacy and religion. I learned, however, that the court is much more likely to rule under the freedom of expression provisions than the rights to religion. A Belgian law student explained this to me as a judicial preference for ruling on grounds of secularism over religion. It really changed my perspective of European conceptions of religion, and made me realize that there are alternatives to our American jurisprudence on this topic.

Outside the subject of religion, it was enjoyable and informative to mingle with the European law students and hear about their educational experiences and career prospects. Their system and trajectory is so different from ours. It was a real intercultural interaction. The academics who presented also left us all with deeper questions about the place of religion in society -- stepping away from precedent, what should religion's role be? Europeans seem to think more deeply about these issues from a philosophical framework than I am accustomed to; I hope to mirror their example and be able to see the bigger picture when I'm getting bogged down in the details of a case.

Even though we didn't come home with a plaque, we had an incredibly enriching learning experience. I'm very grateful for the opportunity to explore a new area of law in-depth, and challenge my own assumptions in a cross-cultural arena.  For more information about this trip, go to the the Law School's website.